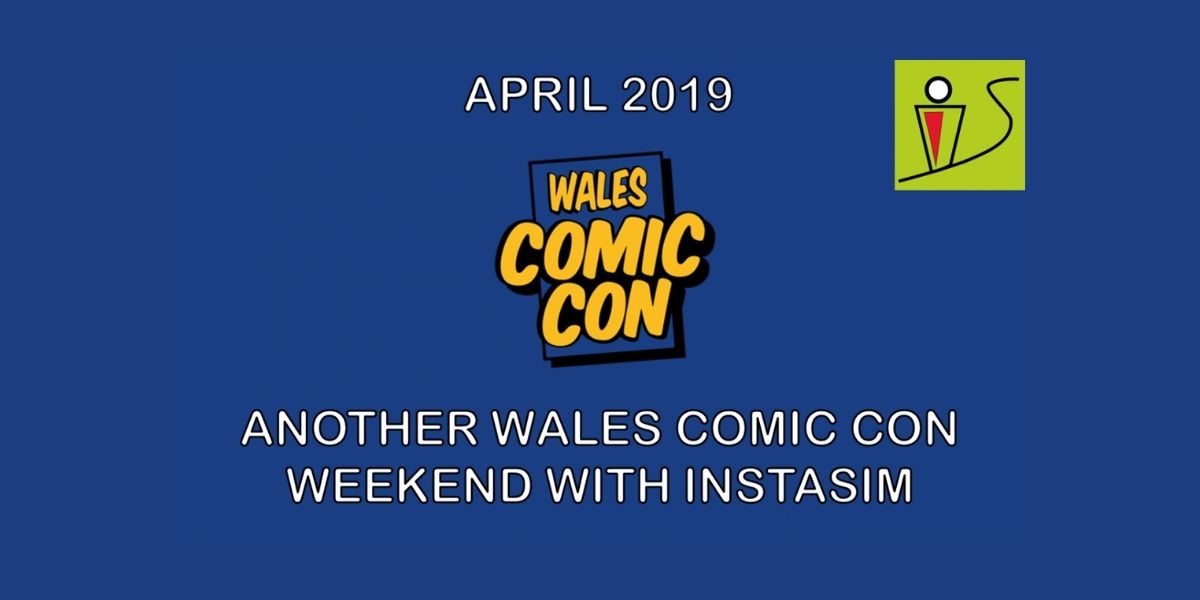 On the 27th and 28th of April 2019, InstaSim once again made his way to the popular cosplaying event, Wales Comic Con. Find out about his experience over the weekend here.
SHARE
Facebook
F
Twitter
T
Google
G
Pinterest
P
COMMENTS
Spread the love

After a great 10-year anniversary celebration, Wales Comic Con made its way back to Wrexham for yet another weekend of cosplay and celebrity shenanigans.

Once again, with huge thanks to Athravan for securing Press Passes for the weekend, the infamous vlogging camera made its way back to Wales Comic Con for another weekend of content creation, this time with some extra equipment to make the viewing experience even better.

Unfortunately, due to the adverse weather conditions on the Saturday, this time I was only able to record enough footage for one video as opposed to two. Despite this, it was still a lot of fun to record the video, and I’m incredibly grateful of the help received by Damian on the Saturday.

Over the course of the weekend, once again, I managed to record a few interviews, play some really cool games in the gaming lounge and meet a few cosplayers. This time, however, I didn’t meet any of the celebrities who came to Wales Comic Con.

The games lounge made a come back to Wales Comic Con with many upcoming game developers showcasing games, and Glyndŵr University students showcasing their own games which were available to play.

The gaming stage was also back in the Games lounge with a few competitions going on over the weekend on a variety of different games on the Nintendo Switch. There was also a raffle taking place on both days, in which there were many great prizes to be won.

One of the games we managed to play at the games lounge was Junkship, developed by Evil Owl Studios (one of the University’s game studios). Junkship is a multiplayer competitive scavenger game where the players are going around a junkyard looking for small bits of scrap metal to build a rocket and to escape. The first person to build their rocket and escape is the winner.

In Junkship you need to try all you can to be the first person to build a rocket. You can pick scrap pieces of metal from the ground to take them back to your corner, but you’ll need to be careful of other players who can steal your scrap metal to slow you down and attempt to build their rocket first. The game itself is incredibly fun and we look forward to hearing more about it.

Another indie game studio showcasing at Wales Comic Con was Psyanotek, who were showcasing their strategy mobile game Wizard Warfare.

Wizard Warfare is a turn-based strategy game with a fantasy theme. The idea behind the game is to give a deep strategic experience to the player, but to also allow players to drill down into the tactical level and provide a lot of options for these. One of the key features developed was to try and minimise the problems players could have with micro-management which is prevalent in many strategy games currently in the market.

We interviewed James from Psyanotek whilst at Wales Comic Con, who we were able to ask a few questions about the game. Currently the game is only available for Android and Amazon Fire devices, but the developers are currently focusing on a PC port for the game. They also have ideas to allow for cross-platform play for the game as well, so you could be playing the game on PC, then be playing the same game from where you left off on your phone on your way to work / school.

Unfortunately we didn’t quite get a chance to play Wizard Warfare whilst at Wales Comic Con, though the game is available on the Google Play store and on Amazon for anyone who would like to play the game themselves.

Ubisoft is a regular visitor to Wales Comic Con, and this year was no exception. From series such as Watchdogs and Assassins Creed, Ubisoft certainly has a large portfolio of great games available on the market.

This year at Wales Comic Con, they were showcasing Trials Rising, the latest instalment of the popular Trials series. This game is loosely based on real-life motorcycle trials, and puts the controls of the motorcycle in the hands of the player. The aim is to get from the beginning to the end, but to also perform some tricks along the way and make sure to not fall head-first on the floor or you’d have to reset to the nearest checkpoint.

Unfortunately we weren’t able to interview any representatives of Ubisoft at Wales Comic Con, but we did manage to play a level of Trials Rising on the setup they provided in the games lounge.

Trials Rising was released in February 2019 and can is available on PC, PS4, Xbox One and Nintendo Switch

Warriors Of Ragnarök – Round Squares Studios

Round Square Studios were back at Wales Comic Con showcasing Warriors Of Ragnarök again. The game itself released back in January this year on Steam, and we managed to speak to Ricky Barnett, the Managing Director or Round Square Studios, to see what the plans are going forward.

Ricky mentioned to us that the game has been received really well since release. The team have received good feedback and good critique about the game which has lead to some minor updates to fix bugs and improve some features. Ricky also mentioned that there are other updates in the pipeline to add some new levels and some new realms in the game. The team are also working on a few quality-of-life features to make the game more accessible to players.

Away from Warriors Of Ragnarök, the team of Round Square Studios have also teamed up with another North Wales based studio, Samurai Duck, on a game called Boaty McBoatrace, a boat racing game where the idea is to cause as much chaos as possible with friends. The game has been in development for a few months, and updates about the game are available on both studios’ Twitter pages.

As well as showcasing games at the Games Lounge, Special Effect were also at Wales Comic Con over the weekend showcasing Minecraft, but with a slight twist.

Some of the volunteers at Special Effect were at Wales Comic Con showcasing the Tobii Eye Tracking System which allowed visitors to play Minecraft with only their eyes. The idea behind the system is to make gaming more accessible to people who have disabilities which may cause them to be unable to use their hands, or for people who have amputated arms meaning that they wouldn’t be able to use conventional PC equipment. Equipment, like the Tobii Eye Tracker, are incredibly useful tools to use in this area and it was great to meet the team at Special Effect showcasing the system at work.

I did manage to have a quick go at using the Tobii Eye Tracker as well, though it didn’t work too great with my eyes due to my requirement to wear glasses.

The Merch Tent at Wales Comic Con is always packed with great items from Funko Pops to souvenirs. Some people come to sell their own stuff, and some people even come to sell food items like toffee.

Whilst at the merch tent, we came across a stall selling pencil drawings drawn by Chris Baker. Chris Baker is an autistic pencil artist, whose parents, Sam and Stewart, were at Wales Comic Con this year selling some of his artwork.

The artwork on display was phenomenal and I had nothing but praise towards the attention to detail. I even bought myself a pencil-drawn portrait of Matt Smith drawn by Chris.

We also managed to have an interview with Stewart about Chris and what lead to him making such talented drawings. During the interview, Stewart made reference to his and Sam’s decision to take Chris out of school at the age of 14 to focus on his drawings, and ever since the artwork has been getting better and better each time.

Amongst the artwork was also some inverted drawings, where you would need to point an inverted colour camera display at the photo to be able to see it properly, which is an amazing feature to add to some of the drawings.

The celebrity lineup, as always, was pretty good. Though there weren’t many that I knew all too well, there were definitely two celebrities that stood out from the lineup.

This year, Wales Comic Con greeted Rupert Grint and David Tennant, although they were only present on the Saturday. This year, however, I didn’t interview any celebrities, mostly as no others really stood out to me nor did I know much about them. Understandably, I wasn’t able to interview Rupert Grint or David Tennant as their queues were far too long, but I did make my way around the signing hall for some video shots.

Wales Comic Con is always big with cosplaying, and this year was no different. Due to David Tennant’s appearance at the event, many people were dressed up as Doctor Who. There were also people dressed up as characters from the Wizarding World franchise as well, but they weren’t the only exceptions. Stormtroopers were, of course, patrolling the area, as they do each year, as well as people were dressed up as other characters from the Video Games, TV and Movie worlds they enjoy.

We did manage to interview one cosplayer this year, but due to Damian forgetting to record it, we never managed to put this in the video, but a bloopers reel is in the process which will include this.

In conclusion to the Wales Comic Con weekend, the event was, once again, very enjoyable to attend and we had so much fun covering the event on behalf of the Welsh Gaming Network. Once again, a huge thanks to Athravan for securing the Press Passes for the weekend, and we hope we can have opportunities like this again.

I look forward to the event in December, which is now being hosted in Telford on the 3rd and 4th of December.

Be sure to check back on the WGN website, Discord and Twitter for details on Wales Comic Con in December.