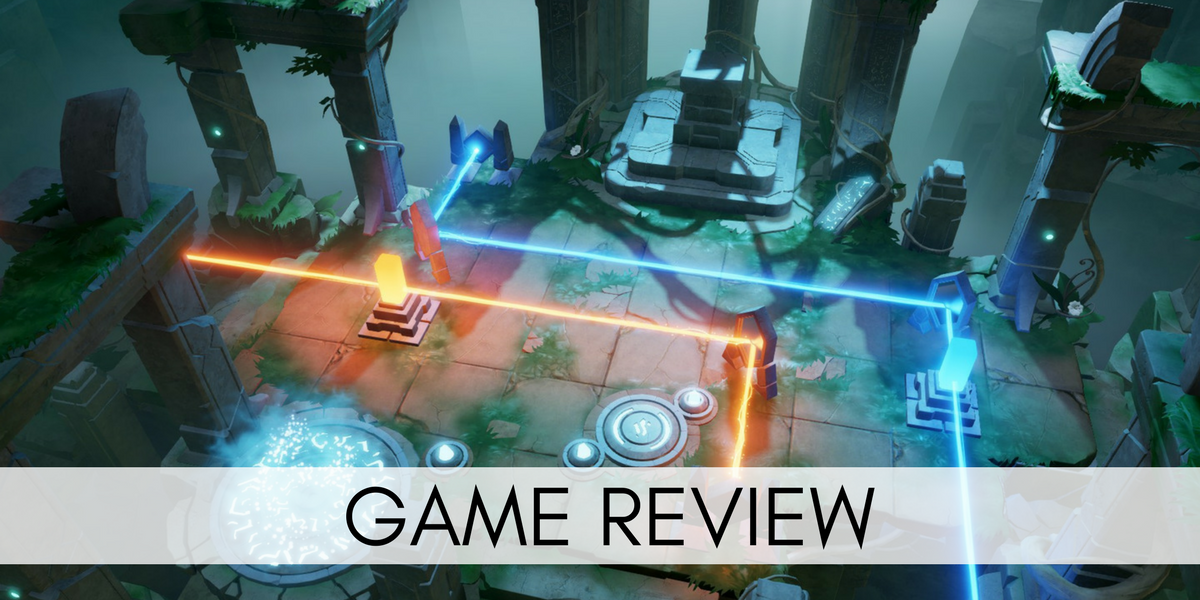 Archaica: The Path of Light

Archaica: The Path of Light releases on Steam on 8th September. This is the first game release for Indie studio Two Mammoths. You can visit their website for more information on the game and follow them on Twitter for future updates. Two Mammoths provided Athravan with a pre-release review key in order to get an early look at the game.

Archaica: The Path of Light uses a fairly well known puzzle method – reflecting light off mirrors to reach a target. This has been used as a mini-game mechanic in adventure games (as well as an education tool) many times, but Archaica takes the concept to the next level and bundles it up in an extremely attractive package.

There are a set amount of mirrors on a level and you can move and rotate them. By deciding where to place them and in which direction they point, different shaped mirrors refract the light in different directions. Some amplify the strength of the beam whilst some split it into two directions. The aim is to activate pillars to complete the level – some of which require two different colours to blend into a new one. There are also other puzzle elements, like activating keystones to unlock secret levels, filling orbs to trigger map changes and other mechanics that I’ll let you explore.

Note: My screenshots don’t contain any spoilers past the first few (very easy) levels and nothing at all past the first keystone so you’ve got plenty new to explore. The screenshots show the levels at reset position; so don’t worry that I’m giving away any hints!

The gameplay concept alone wouldn’t have hooked me although it certainly is good; what really drew me in was the visuals. The maps are stunningly detailed. Through beams of light we explore ruins and unlock ancient magics. If you really stop and study a map you can see the time and effort that went into the artwork. It’s not just the maps, it’s the menus, the achievement screen, the cutscenes/animations (of which there are plenty, simple but very effective). I’ve never looked at an achievement screen before and said “wow”, but as you unlock achievements you light up and activate an ancient totem, making progression feel very satisfying.

“Many of the Light Bearers have faced The Initiation Ring, although not all were worthy it must be said.”

This is an entire world to unlock, not just a simple light puzzler. On each level there are lore items to unlock – optional environmental collectibles that provide an interesting narrative and add a hunt and seek element of gameplay. By finding cells you can also power up hints, so if you need a little nudge you can get it. The lore of this ancient abandoned world and the Light Bearers who used to control it is surprisingly deep and interesting. It’s rare to find a puzzle game that puts this much work into the back story and universe.

Archaica has been polished until it’s sparkling. It’s a full package that I rarely see from a small indie development studio. It has a genuine atmosphere that you often don’t find in puzzle games. On the surface, this is a very simple puzzle concept – but everything about it just feels satisfying. It’s on a custom engine and founded by two Polish brothers who spent three years of their life perfecting it. All I can say is what a talented family! I’ve not been this excited about discovering a new indie studio in a long time – I can’t wait for their next project.

This is a serious contender for my Game of the Year!

About Athravan
Athravan - Christy - joined the WGN in February 2016. A keen writer and reviewer, she is currently the Editor of the Welsh Gaming Network. She lives in Cardiff with her husband and son, who was born in 2017. You can follow her Steam Curator "Play with Ath" by clicking the website link below.
View All Posts by Author
Visit Author Website
Reaching for Petals
Celtic Games Show 2017