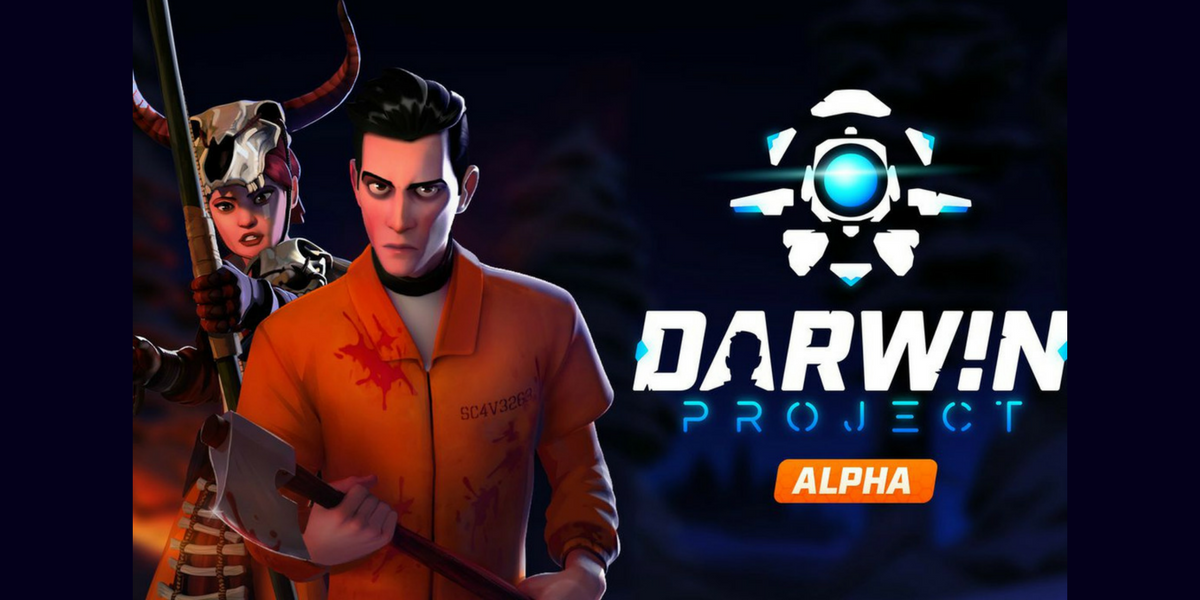 Darwin Project is a 10 player Battle Royale style PvP Deathmatch with the addition of one player controlled Show Director causing carnage. Set in an arctic forest, complete with tented villages, forest huts, and tree-top walkways, you spend the match harvesting resources, upgrading your gear, and hunting each other down one by one to slaughter each other, naturally. I have seen some folks work together who clearly knew each other, and there was apparently an alliance system Alpha 1.0 which was removed for 2.0. For this update, as far as scoreboard goes, it’s every man for themselves and there can only be one winner. It’ll be interesting to see what the options are for team play in the future. 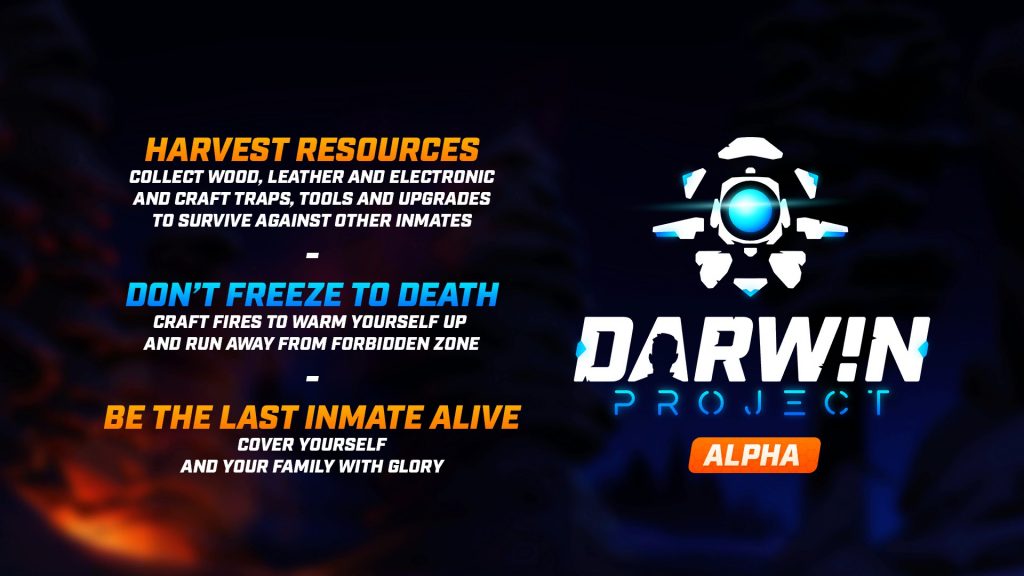 Last weekend I played Darwin Project’s closed Alpha 2.0 and I’m happy to share my first impressions of the game, based on what’s currently available.

Darwin Project’s gameplay is simple but does have depth. You have a melee weapon (axe) and a ranged weapon (bow) and can upgrade armor, cloak (warmth protection) and boots (speed) with leather and wood which you farm from the environment. You can also craft a delightful array of traps, from tripwires to bear traps to fake-chests. At the beginning of every game – or from the menu – you can set your crafting wheel for the next game, with a fair amount of options, some of which favour strength, stealth, speed or efficiency. 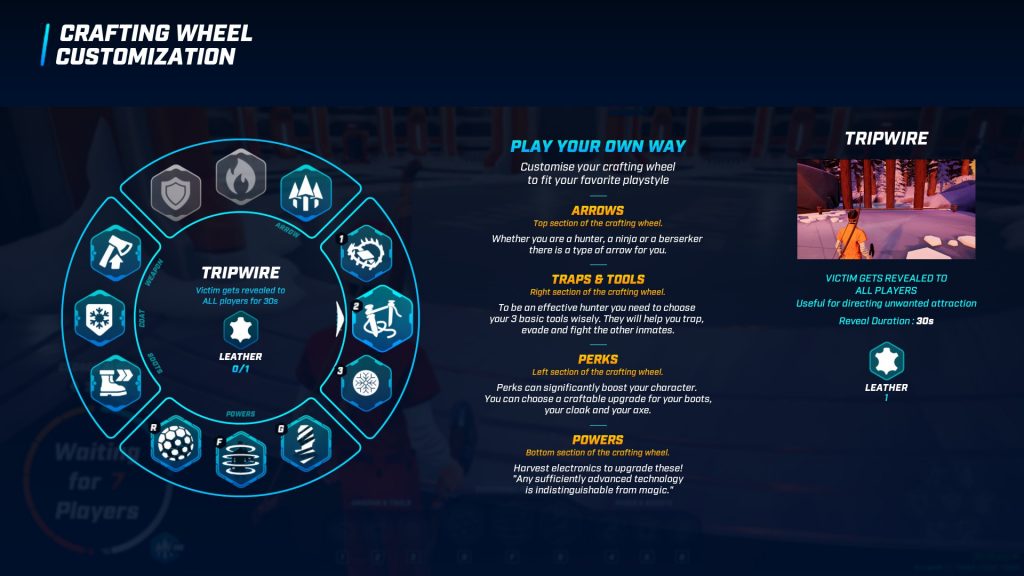 In addition to player damage, the environment can kill you, as you need to remain warm or will die of cold. Staying warm is super simple, just craft a fire! Except that fire will reveal your location from quite a distance, allowing any nearby enemies to creep up on you whilst you toast yourself. Unless of course, that’s what you wanted, after surrounding yourself with cunning traps, with radar upgraded so you can watch them coming and dodge their arrows. There’s definitely some scope for stealth and strategy as well as all-out brawling. 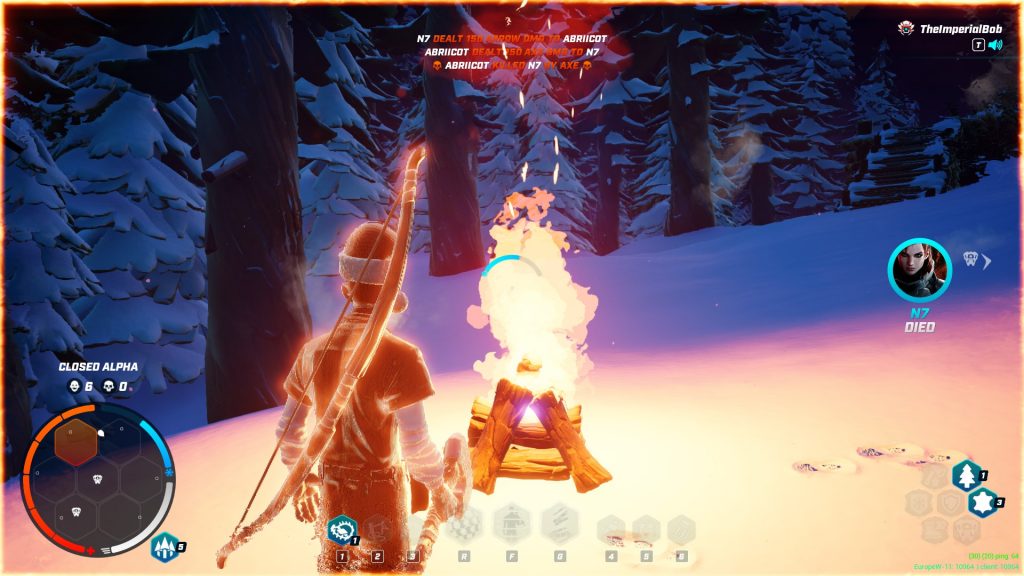 As well as the 10 contestants, you have a Darwin Project Show Director, a lá Hunger Games. This unique player controlled position can view the battlefield and drop electronics onto the field. These electronics are rare crafting pieces that are used to upgrade pretty powerful permanent bonuses. As you can imagine, everyone wants them, but what do you do? Go to the electronics and risk having to fight it out, or slink around the edges, lower strength but far safer? My very first game I actually came third purely by staying hidden. When I spectate after my death though, I often see the winner having quite a few upgrades and there’s definitely a big advantage to farming as much as possible.

The Show Director can also close zones, which they will do periodically until only one zone is left in a long game, forcing players into a smaller space until there’s no way to hide. They can nuke zones – which instantly kills everyone in them (there’s a timer for you to get out quickly – so speed upgrades are a plus in this scenario). They can heal people, give people speed boosts, warm them if they’re about to die of freezing… they can also decide you’re getting rather too strong for their liking, and start a zone-wide manhunt where everyone can track you. Ouch. In short, the show director dictates the flow of the battle and can turn the tide for or against you. This fun position that anyone can play really gives this game an interesting edge that a lot of other Battle Royale games don’t have. 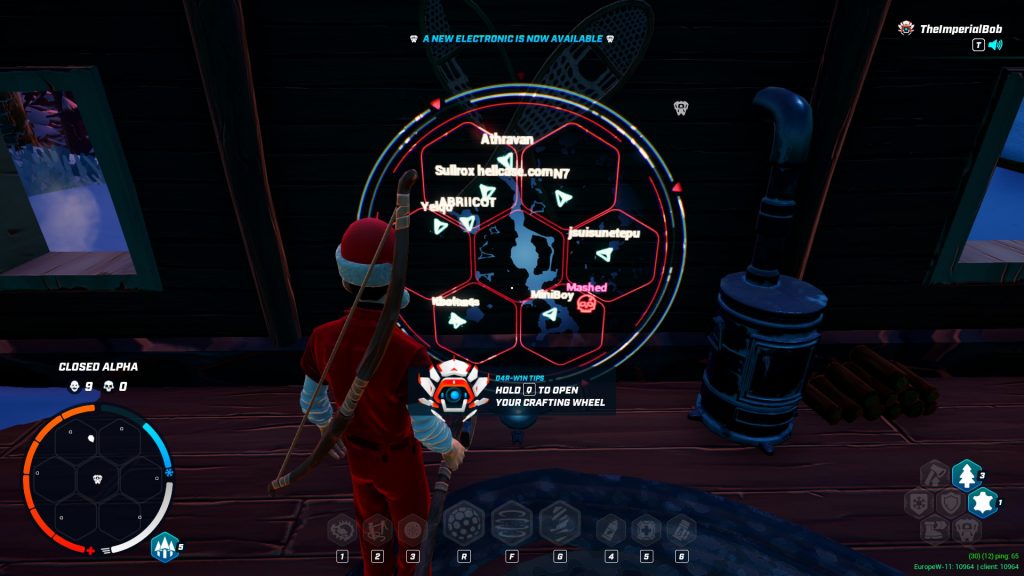 With the ability to search for clues and track enemies, upgrade radar, become near-invisible, boost your jump to the sky and so much more, the matches are really very intense and with only 10 people, most fights are 1v1s with some melee and kiting involved compared to instant deaths from a distance. You can headshot someone with your bow, but you can’t one-shot them. With armor upgrades and if they’ve picked up a few health packs along the way, the final battle can end up being quite epic. 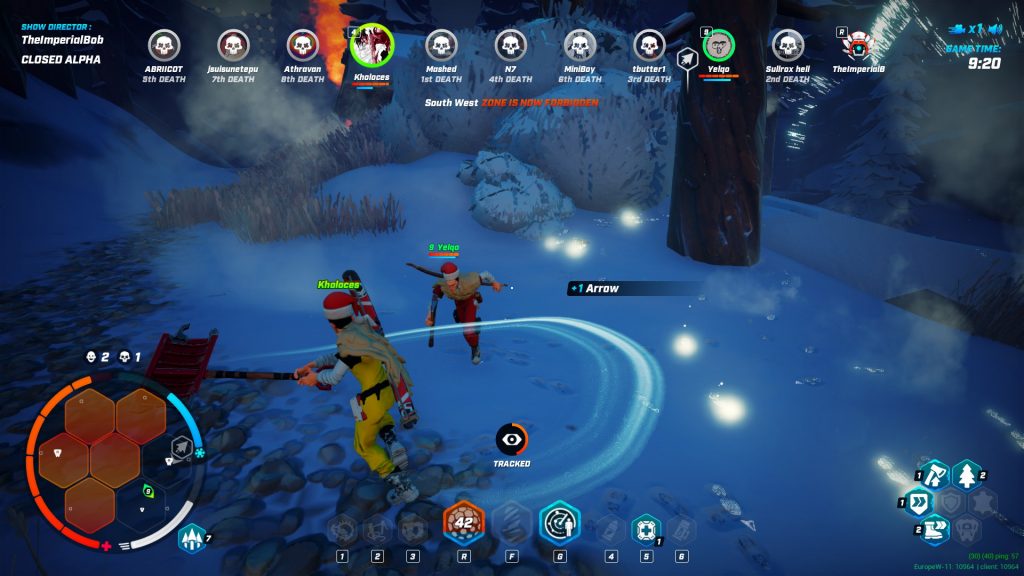 It’s also cartoony, silly, fun and short, with games in my playthrough this weekend taking from 5 to 15 minutes absolute maximum. I once came third with a 3-minute timer, and my personal best was surviving a whopping 13 minutes. It’s good for a quick jump in, and certainly in this alpha weekend, had lots of servers that filled up quickly with players, meaning only a few minutes wait to find folks to play with. With an 11 player maximum (10+1), this could also be a lot of fun for community nights and groups of players. 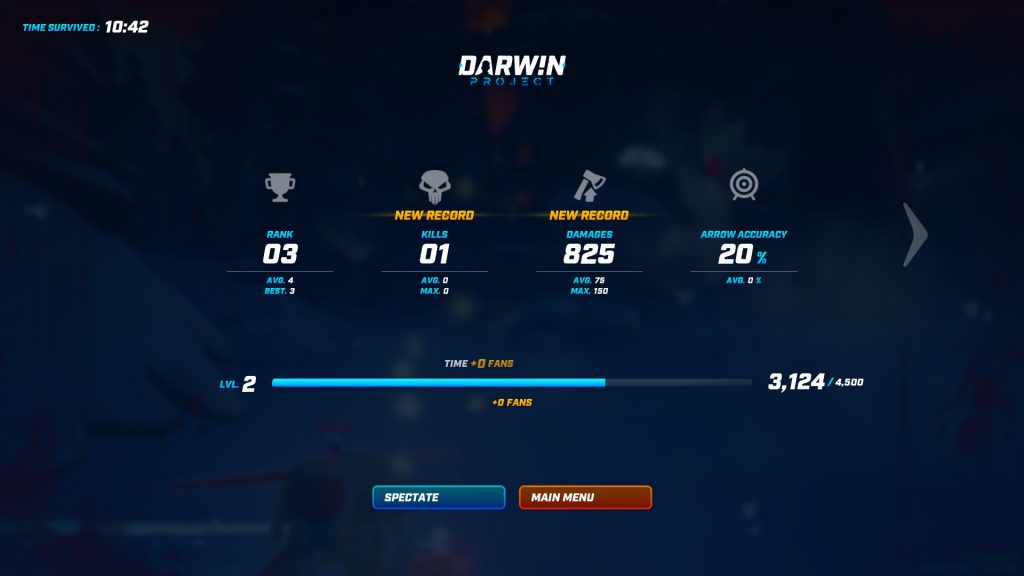 Although Battle Royale games are popping up absolutely everywhere and aren’t really my personal favourite, I had a lot of fast-paced fun with Darwin Project this weekend and I’m looking forward to watching the development moving forward.

At the moment the game is closed development keys for set testing dates only but will be coming to Steam and Xbox One in Spring 2018. The pricing hasn’t yet been revealed, but there is a customizable cosmetic system in the game at the moment (bare bones) that suggests there may be purchasable cosmetics or loot boxes in the future, which will come as no surprise to anyone. You can currently subscribe to the mailing list on the Darwin Project website for a chance to be chosen for an Alpha key.

About Athravan
Athravan - Christy - joined the WGN in February 2016. A keen writer and reviewer, she is currently the Editor of the Welsh Gaming Network. She lives in Cardiff with her husband and son, who was born in 2017. You can follow her Steam Curator "Play with Ath" by clicking the website link below.
View All Posts by Author
Visit Author Website
My Top 10 Picks from the Steam Winter Sale
Nadolig Llawen 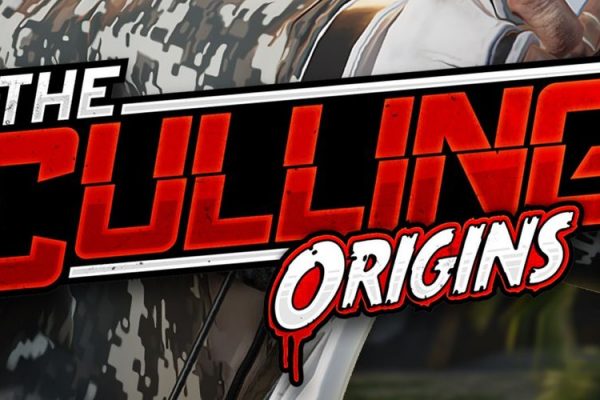 What on Earth is going on with The Culling? 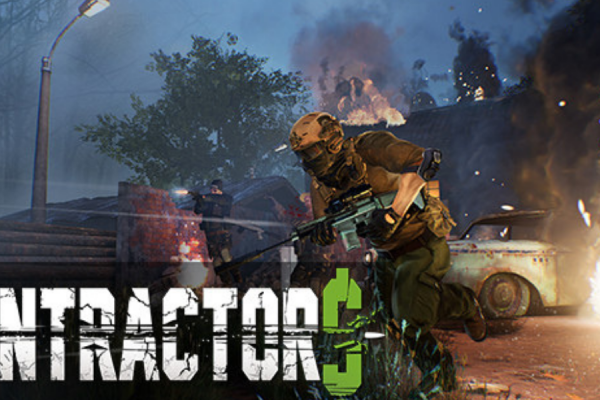 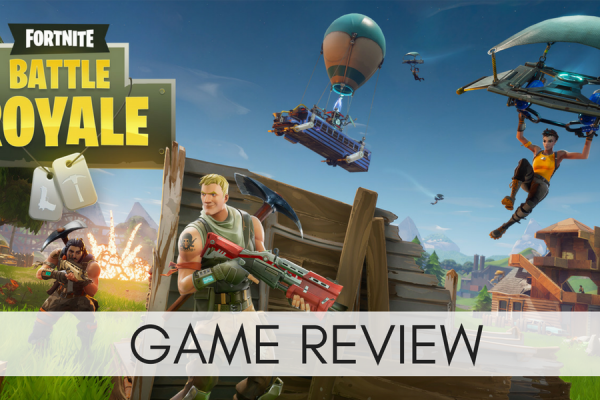