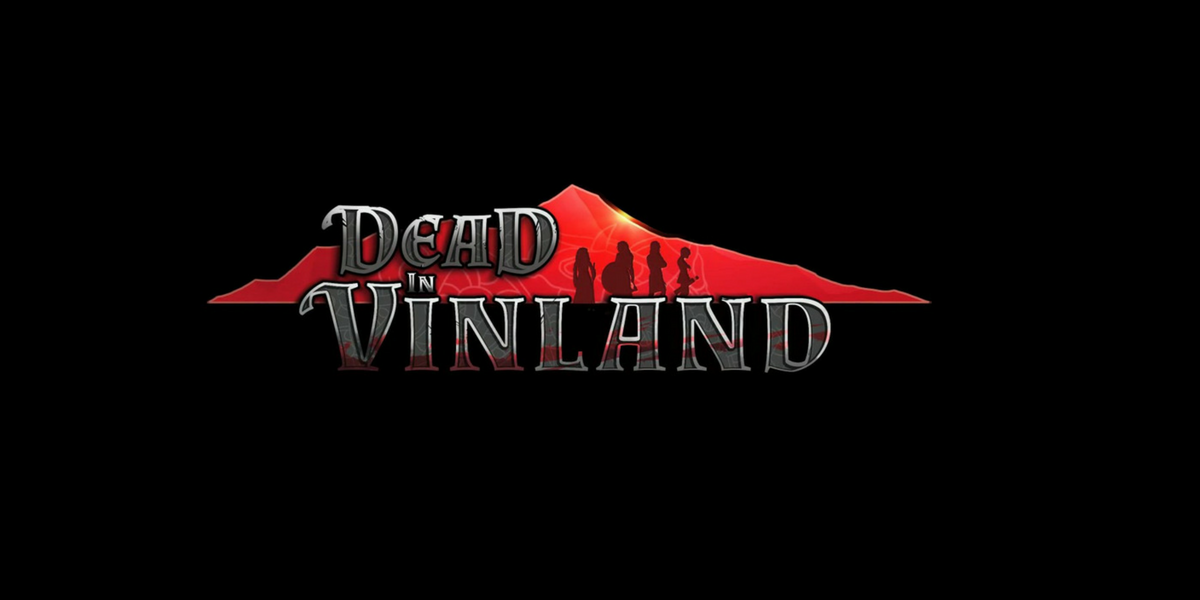 Athravan reviews Dead in Vinland, a strategy survival game with deep management elements. Although the main theme is one of Viking survival, there is a nod to Wales with two main characters with Welsh origins.
SHARE
Facebook
F
Twitter
T
Google
G
Pinterest
P
COMMENTS
Spread the love

Dead in Vinland is the successor to popular management game Dead in Bermuda and is developed by CCCP. It released on 12th April 2018 and is available for Windows or Mac on Steam or Humble Store for £15.49 at full price. If you subscribe to Humble Monthly you can get 10% off this game on the Humble Store. Athravan was provided with a copy of the game for review purposes through Curator Connect.

Dead in Vinland is a turn based strategy RPG which mixes survival management, story and combat. We play a family of four and the survival of all our main characters is essential, although side characters can be murdered or banished as you please. Eirik is our patriarch, whose mixed past has mysteriously resulted in sudden exile. His wife and her sister are a Welsh princess aka shield maiden and healer aka a witch, who were kidnapped by the Vikings as children and integrated into Norse society. Finally, we have their daughter, a capricious young lady who likes exploring, hunting and not listening to mum and dad, a teenage archer with a rebellious streak.

Because Dead in Vinland follows a set story arc, all main characters are required to be present and accounted for. If one falls – and there are a lot of ways to die – then it’s game over for everyone. Autosaves do allow for you to go back without having to start again, but in my first play I made mistakes very early on that built up overtime and it was easier to start again with my new experience than try to salvage a sinking ship. 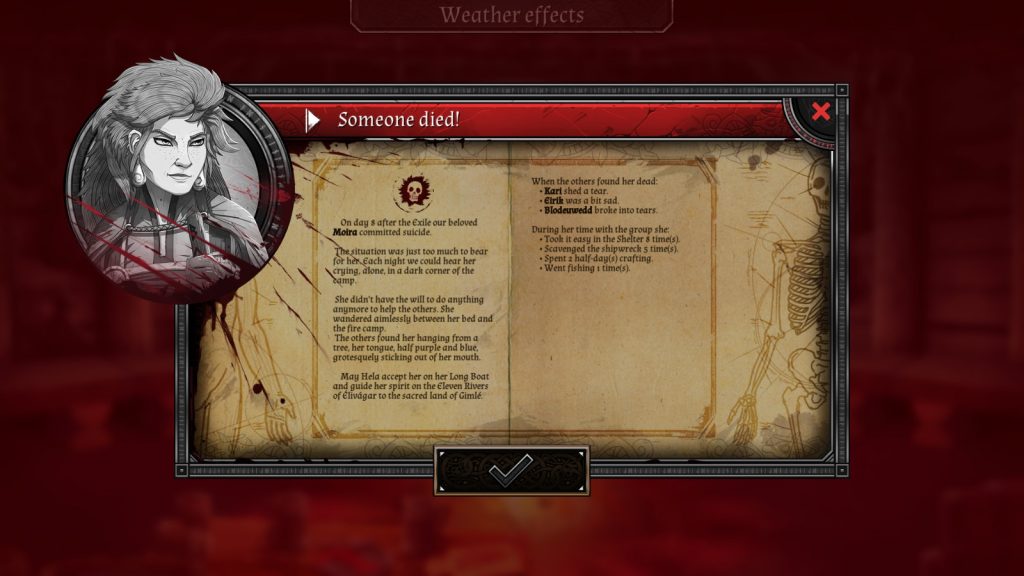 Since this is the Welsh Gaming Network I should make a note of the Welsh connection. Although our characters are Vikings, there are several dialogues focusing on Blodeuwedd and Moira’s home in Wales, where they were kidnapped at a young age by Viking  raiders. Blodeuwedd now married to Eirik was too young to remember much of home, but Moira is still bitter over the fact that the Vikings slaughtered their Welsh family – can’t blame her! Overall the Welsh element is very light but it’s a thematically appropriate and an attempt has been made at providing an interesting backstory here. 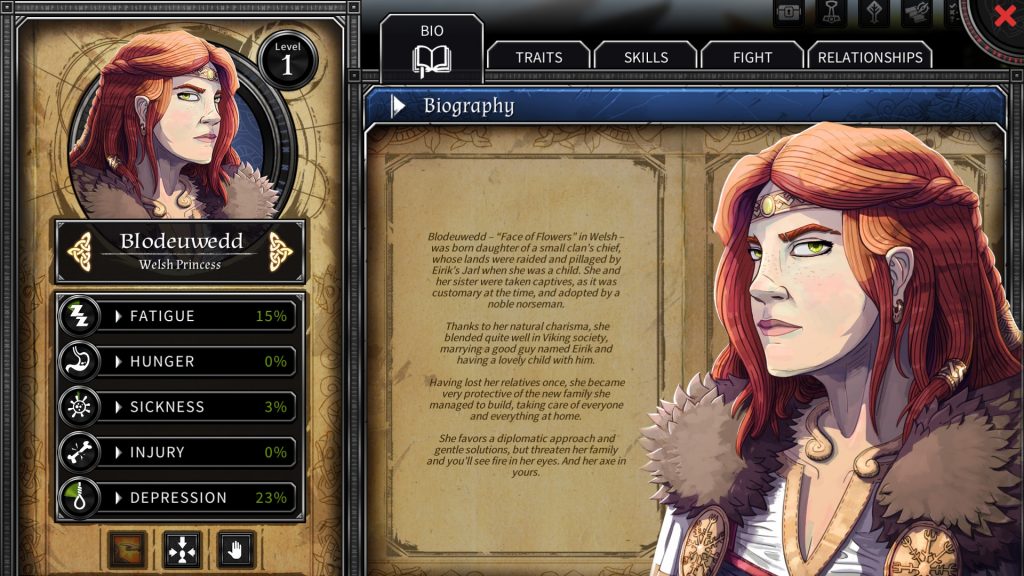 Early on we meet our antagonist Bjorn Headcleaver, who owns everyone on the island and forces them to work for him, meeting tributes – or dying. Your choice. 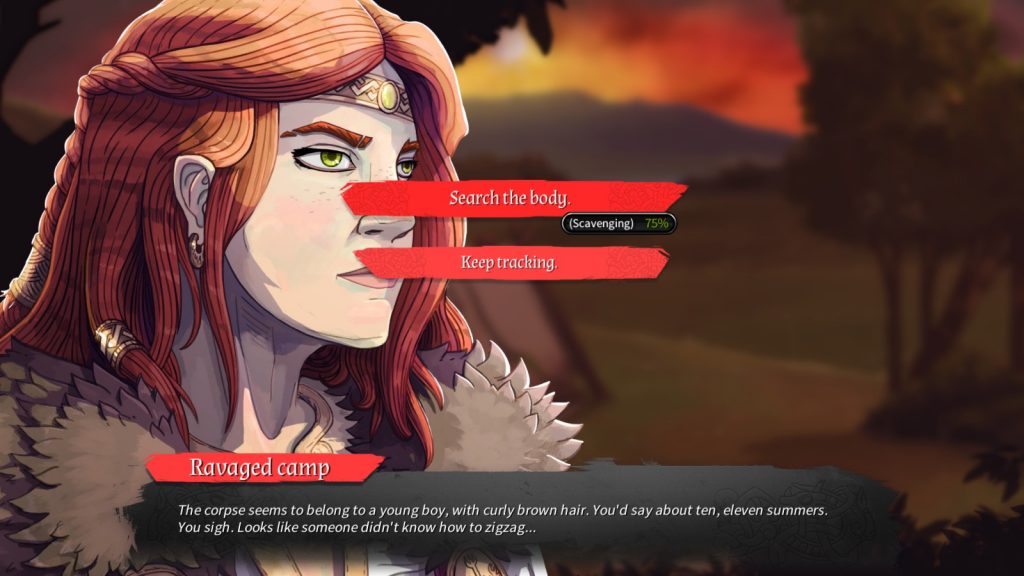 He’s an easy character to hate, a completely one dimensional villain. Like most of the characters, he’s very transparent and there isn’t a lot of depth to the writing in general. The story is enough to keep you interested, but the characters are predictable tropes with occasionally cringeworthy dialogue. As you progress you can add more and more characters to your party, with different personalities and story interactions of their own. I never really empathised with any of the characters due to the poor writing, even though one of them is a Welsh princess, which quite honestly is what I wanted to be when I grew up. 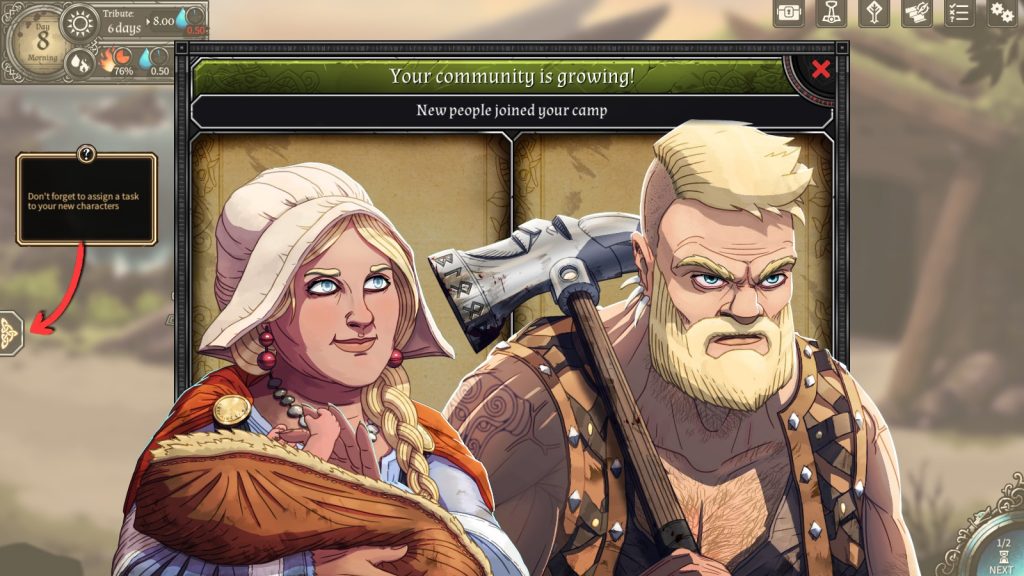 The Strength is in the Management.

There are a lot of options that will really appeal to those who like deep management, crafting, harvesting, building, fighting, exploring – there must be an absolute ton of dice rolls going on behind the scenes. The character sheet is complex and that allows for a lot of decision making in assigning characters to tasks and which actions you plan to take each turn. In addition, the dialogue options and the actions you take in encounters can seriously affect your characters and their struggle. You can make the game a lot harder for yourself if you don’t think your actions through – and not just this turns, but think ahead. The game is tense and challenging and it really keeps you on your toes mentally and overall I really enjoy the survival and crafting mechanics. 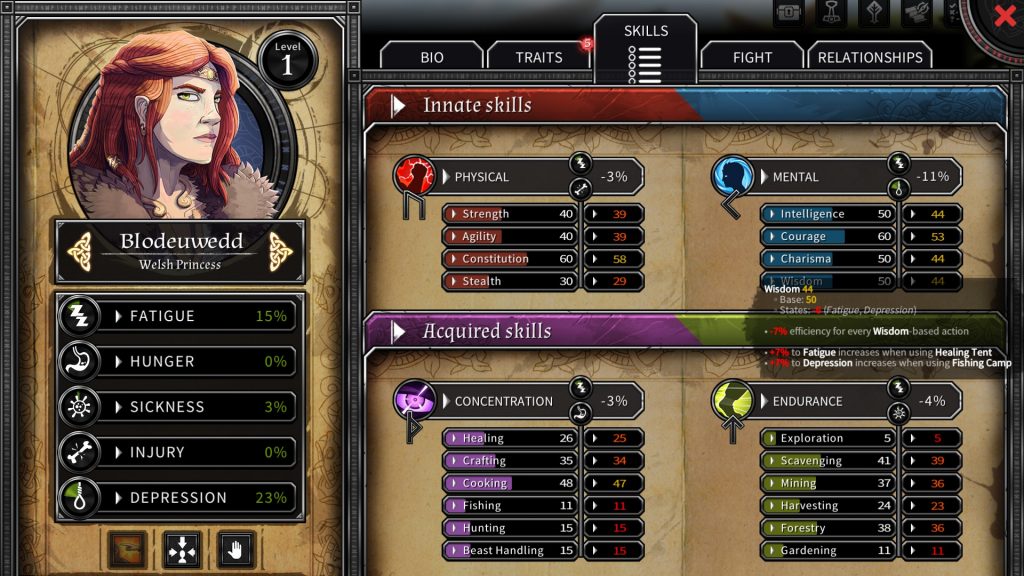 You can build up your camp and have a lot of upgrades to choose from, craft items, equip items, grow crops or farm livestock. The weather will affect everything and there’s some hefty micro management going on to run a perfect camp especially as characters get more and more depressed and eventually suicidal if you don’t account for their mental well-being as well. You gain exp for different actions and when you level up, you have six different choices. Each level up choice can seriously affect how you use that character in future. You might choose a new combat skill, or a permanent perk to charisma to use them as your leader for dialogue options in the future. You might upgrade their farming. On the other hand, you might choose for them to be harder to become injured – but this has a downside, now they become sick more easily. 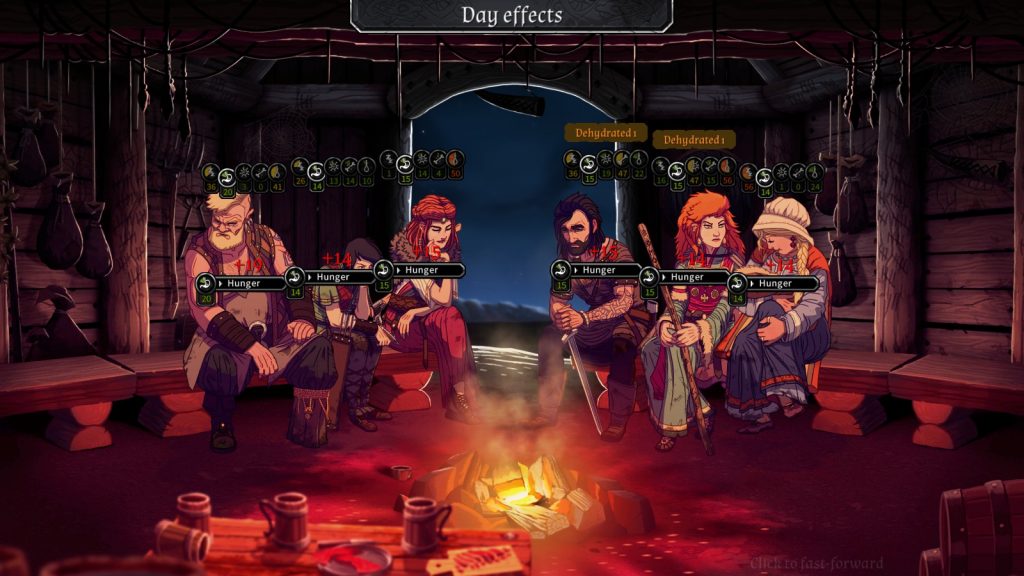 It’s a constant balancing act and I love that – this is the type of survival game I like. Slow, thoughtful, but with decisions that have real consequences and a game that has no fear of saying game over if you make big mistakes. The only downside with that is the scripted dialogue that you have to click through. It’s interesting enough to read once – but when you have to replay it and read the same thing, it gets tedious.

Fighting For Your Life 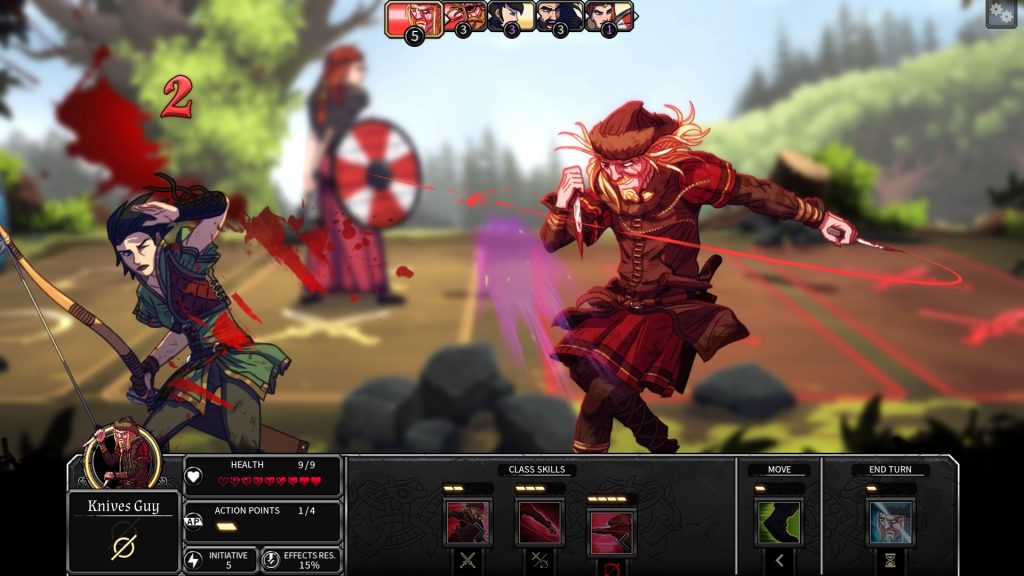 The combat is simple round based that you’ll be very familiar with by now whatever games you usually play. Initiative dictates which characters go first, and after that both your characters and the enemies take turns. Combat is three versus three, with the person who encountered the enemy being locked and the other two a free choice. Characters have skillsets that focus on combat, defense, healing or magic (buffing and debuffing) although to be honest, I usually just take three damage dealers into the fray and hit everyone in the face. I’m a simple girl when it comes to fighting.

Dead in Vinland is a deep game with lots of flavour and a ton of content. It has simple writing and a few annoyances in the UI and with repeating dialogue, but despite those annoyances and occasional frustration at the difficulty level, this is a well crafted survival adventure that those up for a management challenge will enjoy.

About Athravan
Athravan - Christy - joined the WGN in February 2016. A keen writer and reviewer, she is currently the Editor of the Welsh Gaming Network. She lives in Cardiff with her husband and son, who was born in 2017. You can follow her Steam Curator "Play with Ath" by clicking the website link below.
View All Posts by Author
Visit Author Website
#GamingForTinyLives Comes to an End
Any fellow Welsh gaming communities out there?
COMMENTS 32