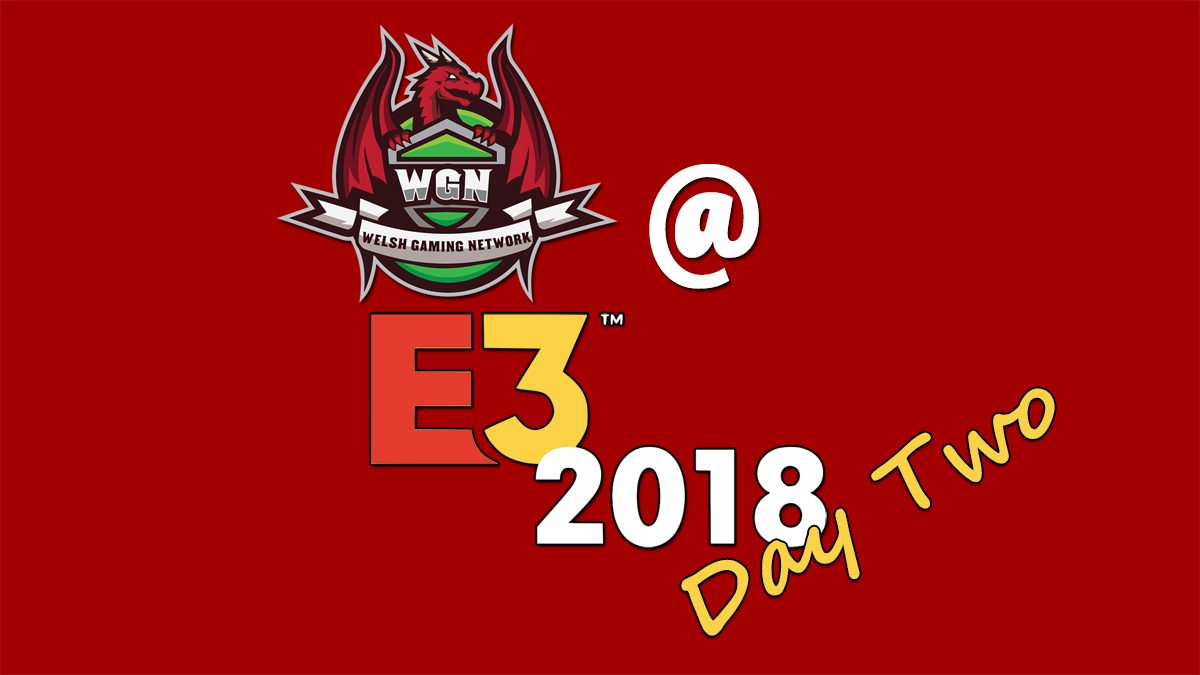 E3 2018 had a great day of gaming news, with powerhouses Microsoft and Bethesda up to get people talking, lets see what JasonGunslinger has to say...
SHARE
Facebook
F
Twitter
T
Google
G
Pinterest
P
COMMENTS
Spread the love

First off, let me be clear, that this conference from Microsoft was huge. An enormous number of games announced so, forgive the equally enormous list. There were some sweet moments and, fortunately, a lot less cringe, so let’s take a look at what was announced. Then, following that, Bethesda’s conference. It took place at 2am UK time but it’s being slotted into Day 2.

ORI
A gorgeous piece of game play and a trailer for new platformer. Very atmospheric and artistically impressive.

Sekiro: Shadows Die Twice
This looks like Tenchu, Onimusha and all other ninja gaming dreams rolled into one. Very impressive game play and cinematic trailers.

Fallout 76
Big reveal, cinematic trailer. Opens with a black and white trailer. It is in fact a fully fledged game, four times the size of FO4! Set in West Virginia, a prequel to all other Fallout games. No game play unfortunately but consider myself suitably hyped! Can pre-order this on June 15th.

Crackdown 3
Showcasing game play, all being narrated in a comedic manner. Looked full on, as per the last games, though with bigger scale and more exciting environments.

Metro: Exodus
First person trailer, cinematic and game play, with a Russian setting. Very stunning, dark and mysterious style and atmosphere. Looks to have plenty of stealth and monsters thrown in. Expertly narrated by the same chap (I think) who does the Witcher 3 campaign intro.

Sea of Thieves
Two new DLC’s revealed. Forsaken Shores and Cursed Sails. This game could do with some more content.

Absolutely stunning cinematic trailer. No game play. The game is set entirely in Britain, with a dynamic weather system which influences the environment. E.g. racing in the autumn, and then in the winter, will transform a lake, to allow for off-road ice driving and new events. Xbox confirmed 60 FPS with this beauty.

We Happy Few
Another stylistic game, similar to Dishonoured. Set in London which is why it gives the same vibes perhaps. Scary looking masks in the cinematic trailer, lots of bleeped swearing. Looks like a combat heavy first person game. Perhaps linear. Not much else shown.

Beautiful cinematic trailer, showing Washington DC, explaining how the American government collapsed. The game will be set 6 months after The Division 1. Set in the summer as well. Then, a game play presentation. Starts in the woods, then moves onto a highway, opposite Capital Hill in Washington DC. Then off into a downed plane. It all kicks off and looks very familiar. Same ridiculous map UI on the floor which we won’t get.

XBOX Game Pass
Announcing Fast Start which will make games start faster. Some super sexy algorithm. It’ll be released in the June update. Also, they are released The Division, ESO and FO4 on Xbox One X.

There is then a reel of more indie level games coming out, though not clear if they’re all Xbox exclusives.

Shadow of the Tomb Raider
Cinematic trailer, looks great but not much is revealed from the last trailer we saw. Bit of a let down.

Devil May Cry
Cinematic trailer begins with a Devil May Cry neon sign on a van, speeding along, before who looks like Dante (younger, with shorter hair) and a woman, jumping out to take down some demons. Monsters do look impressive. Game is introduced by Japanese developer and another chap who helps with the English. It’s a really cool and funny skit with the Japanese guy saying, “English is hard. Matt, you talk.” which got a few laughs.

Tunic
A stunning, simplistic looking isometric game about a small Fox kicking all kinds of ass. Lots of it, too.

Dying Light 2
Cinematic trailer, an apocalypse set fifteen years after the fall. It then quickly reveals the title and some decent game play. How, game play choices have an impact on the environments and NPCs in the game world. This looks really impressive and all have bonuses and consequences. No game play of night time and zombies which is what we want!

Just Cause 4
The same absolute crazy nonsense as before. Cinematic trailer showing off what to expect and… driving a car into a tornado. No game play shown.

Gears of War (Pop, Tactics and 5)
Small clip of GoW Pop. Cute. Then a cinematic trailer for Tactics which I believe is PC? Not sure on platform. The, the big reveal for Gears of War 5. It has a cinematic trailer showing the narrative side of the game, no actual running around and fighting. The story looks strong, however. Good dialogue and interesting premise.

Cyberpunk 2077
Kneel before your overlord! The one (some of us) have been waiting for! Sadly, only a cinematic trailer but we finally get to have a look at the world that CD Projekt Red have been building. And it looks incredible. Very cyber punk and neo-punk and futuristic. Pumped and now I just want to see more.

Rage 2
Kicks off with a very energetic live band on stage. Unfortunately it hits high on the cringe-o-meter. Game play trailer follows, looks a lot like Doom meets Mad Max. More ‘Pre-alpha’ phrasing chucked in for no reason what so ever. More guns less cars. Comes out spring 2019.

Doom Eternal
More powerful demon slayer, more than twice the amount of demons. Hell comes to Earth, as shown in the cinematic trailer. Quake-con will be revealing the proper reveal of Doom Eternal. Bit disappointing but there we have it.

Quake Champions
A teaser for a multiplayer shooter. Too many pauses for cheering, come on now! Free-to-play trial and if you download, you get to keep it for free. Game play, shows off a hero system of characters much like Overwatch and adds in Borderlands stylistic sequences to boot. Looks a little underwhelming.

Prey
Story mode, New Game+, Survival mode being announced for Prey as updates. New DLC being worked on, ‘Moon Crash’. Looks inventive and fun, attempting each turn to make progress in saving the Moon station. Tifan hunter hints at a game mode for being a Mimic. It sounds a lot like the Garry’s Mod that allows us to turn into chairs or plant pots. The on stage act is incredibly cringe. Stop. Please stop.

Wolfenstein
“Beat the living f**k out of those Nazi’s.” is the quote of E3 2018. Wolfenstein 2 is going to be released on Switch. New story! BJ’s twin-daughters as main characters which means co-op but solo is optional. Wolfenstein Young Blood is the title. Sounds very interesting. Cinematic trailer, shows a little of the story, coming 2019.

VR Experiences
Both Prey and Wolfenstein get VR games of their own, with unique modes unique to the VR experience.

Skyrim: Very Special Edition
Really funny comedic trailer taking a punt at all the Skyrim releases they’ve been doing on various platforms. Live action with Keegan-Michael Key. Saying it’ll be coming to a variety of random devices like etch-a-sketch.

A prequel to all the other Fallout games. Four times the size of Fallout 4. As before in the Microsoft conference, this shows far more game play and cinematics. After 25 years, you surface as the vault opens and venture into the wasteland.

This one looks much more lush with vegetation. It also boasts co-op multiplayer in the form of three additional people who can join you on your quest. There will not be hundreds of people running about. Additionally, base building is now mobile with a movable item you can place down to begin your structures. The graphics look far better than Fallout 4 but, the models do look the same which is disappointing, with hints of bland building textures. They quote ’16 times the detail’.

A huge announcement is that it’ll be connected to dedicated severs, though does quote there will be dozens of people on each world, so perhaps multiple teams of people? It shows some game play and looks very like Fallout 4. New UI. Lots of infomercial style videos which is typical of Bethesda. A glimpse at a map shows several areas; Toxic Valley, The Forest, Ash Heap, Savage Divide, The Mire and Cranberry Bog. No other details though.

There is also the option to nuke area’s of the map which transforms the terrain. Upon discussing the performances and servers of this game, they announce the BETA, Break-it Early Test Application. Todd Howard read on the internet that his games had a few bugs, drew a few laughs from the audience. An awesome collector’s edition includes a map that glows in the dark, including figures and a Power Armour Helmet! Incredible. A T-51 Helmet to be exact. It can be worn and has workable voice functions and light.

Fallout Shelter is now coming to the PS4 and Nintendo Switch. It’ll be free-to-play as well.

Elder Scrolls: Blades (Mobile)
Didn’t see this one coming. Looks extraordinarily detailed for a mobile game. Game can be played in portrait mode as well. Looks to have procedural generated dungeons as well. Modes include: Abyss, Arena and Town. Town mode is the main story hub, which also allows you to customise your town and visit the town your friends are working on. Available on high end VR on PC to mobile VR.

A huge announcement is that the game is free, can be pre-ordered right now and you can play it on your phone at work against someone at home using VR on PC. Incredible.

NEXT GEN GAME: Starfield
We get the smallest of teasers. A brief trailer of space and that’s it. Woo!

A brilliant ending to the Bethesda presentation and to Day 2. Microsoft was an average show, with some nice surprises. Bethesda, very much the same. Very little cringe-worthy moments and plenty of excellent games shown. Much more game play as was shown at EA. truly the worst show so far. Bethesda wins easily on this.

Well, that’s a wrap of the impressions. Stay tuned for Day 3 where we have Square Enix, Ubisoft and PC Gaming.

About JasonGunslinger
A Cardiff dwelling, late twenties gamer living with his partner and two cats. In my spare time I love to go hiking, camping and regularly practice Ninjutsu. Favourite games include The Witcher 3 and Night in the Woods.
View All Posts by Author
WGN Vs Cardiff Saints – Overwatch
Level Up Wales 2018