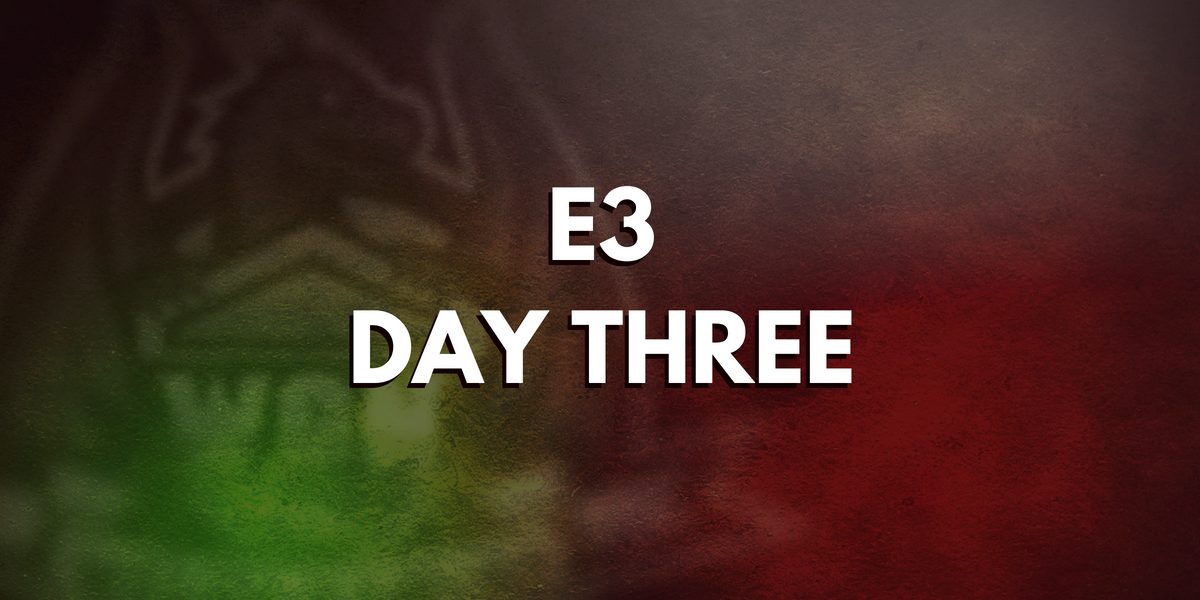 Today, we welcome Square-Enix, Ubisoft and PC Gaming. After the fantastic show yesterday, it’ll be tough to live up to it. Let’s see how they did.

Shadow of the Tomb Raider

An excellent piece of game play shown on top of the initial trailer we have already scene. Combat looks tighter and the environments darker and moodier, perhaps to suit the plot. Movements have been upgraded, to include some classic Uncharted moves such as grappling. More tombs. More traps. Looks good!

Game play trailer, though weirdly chopped up with the Monster Hunter stuff. Are they doing a cross over? Not much is shown except combat.

Cinematic trailer and that’s it. Lots of nothing to reveal really. Feels pointless.

The Awesome Adventures of Captain Spirit

Same cinematic trailer we saw yesterday. Nothing new. A bit of a theme here with this conference…

Cinematic trailer again. This time with a bit of game play which looked like a lot of fun. Again, not much revealed. Just your standard Dragon Quest combat.

The first properly interesting title so far. Something entirely new! It showed a cinematic trailer, for PS4 and Steam. To be released 2019. It looks like a huge fantasy JRPG but more, perhaps, like Final Fantasy meets Bloodborne?

Same cinematic trailer as before. Nothing new.

Cute piece of game play. Nice looking trailer. A top down RPG game with a lot of character and charm.

Same cinematic trailer as we saw yesterday. Then some further details about a new extreme weather system! This includes tornados, lightning, blizzards and sand storms. Also better AI and more of a challenge. Looks like a lot of fun and beautiful graphics.

Ironically, the game with the least amount of noise around it in the presentations. Though the cinematic trailer looks fascinating. Essentially a dude rocks up on two bad guys. Makes everything go quiet and then deals them some hand to hand damage. No other details.

Exact same reveal as yesterday. Except I forgot to mention that Ratatouille and Wreck It Ralph is included in the world’s. Some more game play shown, nothing else.

And that’s it! Very very short and disappointing conference. No stage presence really and just reels of trailers. Mostly short and cinematic. Probably the worst so far, even worse than EA.

Huge dancing intro which is very elaborate and weird. There’s trumpets and bears. It’s all to show off the new Just Dance. That’s it.

Beyond Good and Evil 2

Cinematic trailer looks bloody gorgeous. Very long, looks to be an exciting space opera sequel to the game from years back. SPACE MONKEY Programme means you can contribute music, art, writing etc. to be in the game. Super cool. Creative challenges live now on HIT website.

Promotional stuff about esports as well as a documentary on the game.

Cinematic trailer as before but more content. Shows new equipment and how on completion of game you can specialise in weapons. New 8 player co-op instead of 4. Year 1 will include 3 FREE DLCs. Out March 2019.

Cinematic trailer and discussion about the merchants on game and ship customisation. Looks better than Sea of Thieves.

Cinematic trailer for an artistic space adventure. A bit of game play showing space combat. Simplistic but looks slick. Fox from Nintendo games is in it. Miyamoto receives an awesome ship statue for their collaboration. It’s all very touching.

Gorgeous cinematic trailer followed by extensive game play of a mission. Game is set in ancient Greece with the choice to pick a male or female character! A unique weapon in the game allows for a range of combat styles. They’ve kept a lot of the UI and menu styles from Origins. It looks incredible. Out October 26th.

That’s it from Ubisoft. A few good announcements. Some nice game play which was on par with Microsoft perhaps. Now to look at PC Gaming which, unfortunately somehow, was far too long. Just endless. Apologies for the huge list…

Most interesting game so far. Game play trailer as you play a taxi driver in the future. Lots of cool dialogue.

A bit like Elite Dangerous, with story and space exploration. Cinematic trailer. Gorgeous. Shows multiplayer and beta is available now.

Cinematic trailer regarding loads more weapons. Not much else.

Cinematic trailer for a multiplayer mech game. Shows off map destruction mechanics which are cool.

Trailer for their The Sacrifice DLC. Also Tenno 2018 is a Warframe Convention.

Arty trailer for a turn based fighting game.

A park building game which is out. Trailer showed how you can build your own park SIMS style-ish.

Open world VR shooter where you can fly and climb. There is a Tempest system which rearranges the world every week. That is very cool!

Open world walking sims. Lovely art style shown in the trailer. This will be a buy.

Hi, buy our sexy monitors. The end. The only note of cringe in this conference.

Another No Man’s Sky meets Elite Dangerous. Except with planetary exploration in first person and you get to fight aliens and splice their DNA with the crew. Creepy.

Trailer for Don’t Starve sequel I believe. More of the same.

The same stuff we saw before. Another cinematic trailer showcasing new weather and combat AI.

Game play trailer showing 4 player co-op. It’ll be based in Washington DC. Separate from the game below.

A game where you play as a wizard. Unique selling point is the cool pixel art graphics. Very funky.

Game play trailer showing Sims like hospital building and maintenance. Looks weirdly awesome for such a niche idea. My girlfriend is dying to get it.

Think Battle Royale but with fantasy themes. That’s it.

A cute farming game which includes creatures to catch. Like Digimon or Pokemon.

Just a trailer for the sequel and looks a lot like its predecessor. Nothing that stands out unfortunately. Perhaps disappointing?

Cartoon style, top down combat game shown. There’s a lot of these style games being shown and they all look addictive. It’s a cunning plan…

Last but not least, after the 500 hour long conference, is Hitman 2. Cinematic trailer shows the use of much larger crowds and the welcome return of the sniper suitcase. Very James Bond. The game. Looks as fantastic as when it was first shown.

And that’s it for Day 3! Sony will be included in Day 4. This is shaping up to be a fairly decent E3.

About JasonGunslinger
A Cardiff dwelling, late twenties gamer living with his partner and two cats. In my spare time I love to go hiking, camping and regularly practice Ninjutsu. Favourite games include The Witcher 3 and Night in the Woods.
View All Posts by Author
WGN – Belong by GAME Collaboration
We need players to represent Belong Cardiff!