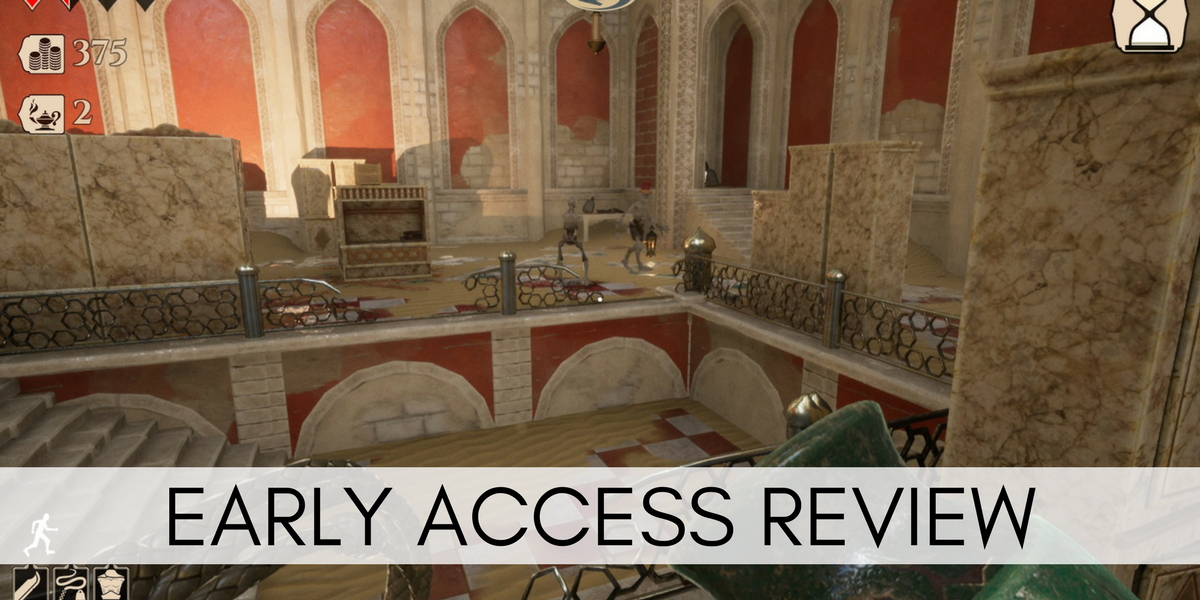 City of Brass released into Early Access on Steam on 18th September. It’s currently priced at £18.99 and is developed by Uppercut Games, an independent Australian studio who also released EPOCH and Submerged. This is a review of Early Access Version 0.3 and the developer provided Athravan with a key to experience the game.

City of Brass is a first-person action, rogue-lite game set in an Arabian Nights-themed “City of Brass”. Working your way through rooms filled with enemies, traps, and loot, the aim is to complete the 13 levels and get all the treasure. I don’t know what happens then, as I’m nowhere near good enough to succeed as of yet. I’ve played for 10 hours so far and only succeeded in getting halfway through and even that was a struggle. This is a fairly consistent theme for me when it comes to reaction based games. 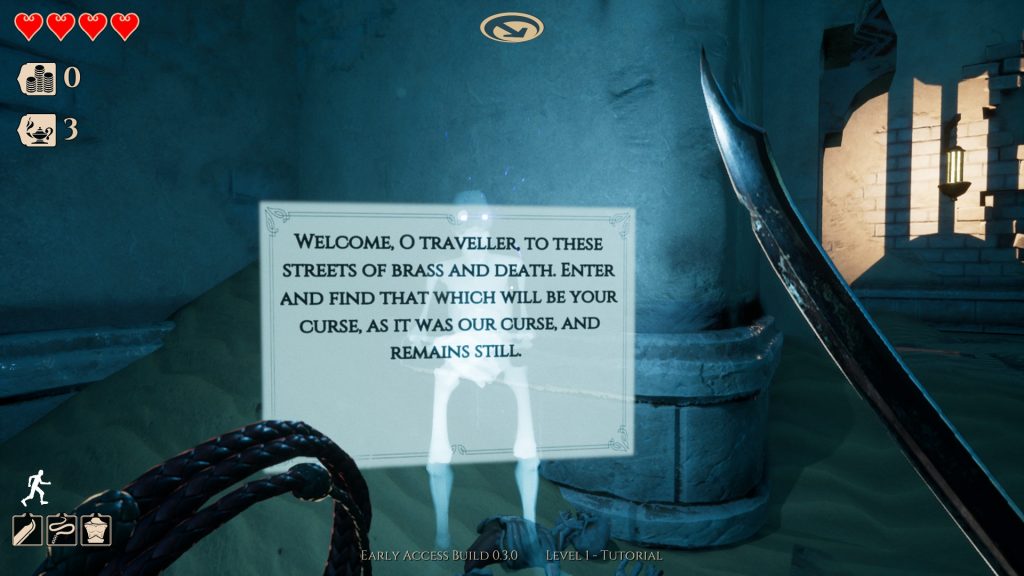 The gameplay is fairly smooth, with movement consisting of running, jumping crouching and sliding, but alas, no real parkour of any kind. Combat is swift, responsive and satisfying, with a melee weapon, ranged whip and limited throwables. The whip is a lot of fun to use, with the ability to hit enemies in different locations for different results (hit the feet to knock them down, hit the face to blind them etc) as well as the ability to pick throwables up with it. Enemies are fairly diverse, with different strategies required to defeat them. There are lots of different traps, although perhaps a few too many, as sometimes it does feel a little bit like City of Traps. There’s a lot of fun to be had in pushing and pulling enemies into traps, kiting them around and triggering the traps with your whips. Watching them get crushed, spiked, impaled and blown up is always good for a bit of morbid entertainment. 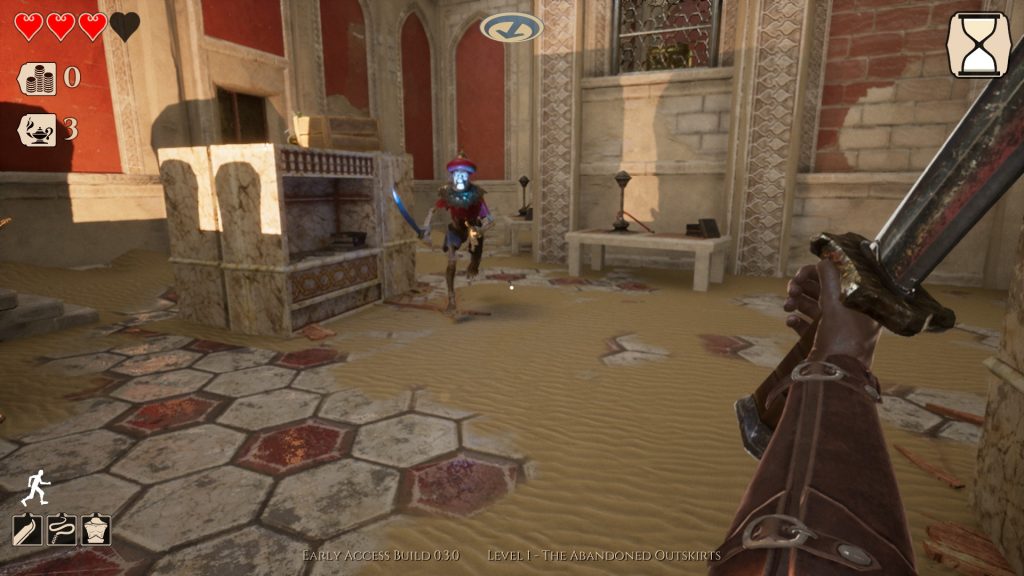 I enjoy the equipment system, as it seems quite varied and can make progression different. This is RNG based, as all the levels and shops are procedurally generated. You pick up loots as you run through the level and then spend it at various shops (genies). There’s a good variety and it does actually make a difference what you buy. Although the levels are tile-generated, they sew together seamlessly and look very natural. It’s not quite the quality you’d get from handcrafted level design, but it’s surprisingly clever and very well done. The random generation is of course what gives the game the majority of its replayability. 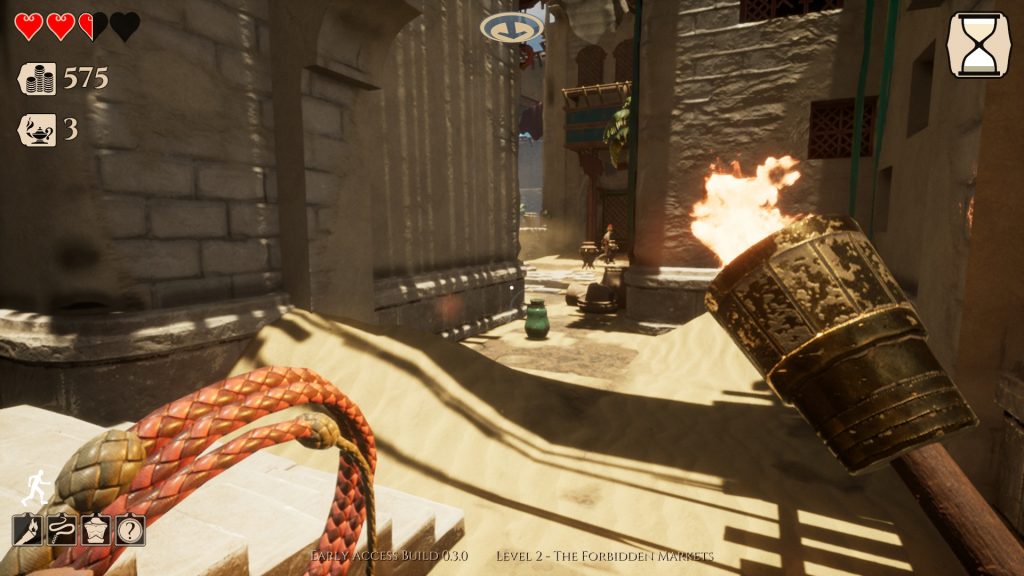 It’s described as a rogue-lite, which usually indicates progression upgrades but there aren’t actually that many upgrades that carry through. For someone who is not particularly good at this sort of game, but still enjoys playing them, this really upped both the challenge and frustration level. I like to feel like I’ve achieved something, even if I died. The only thing I’ve discovered that carries through is that every 3 levels you can unlock a portal which allows you to start at a later level in future runs, and there are a few consumables you can purchase which will carry over to 1 future game, but not permanent additions. If I was going to find a complaint with this game, it’s this. My main suggestion for improvement would be more permanent upgrades, even if that’s attached to an “easy mode” for people with granny reflexes, aka myself. Every death was my own fault due to not seeing a trap, not dodging, or simply not reacting in the best way and I’ve not encountered any bugs so far. 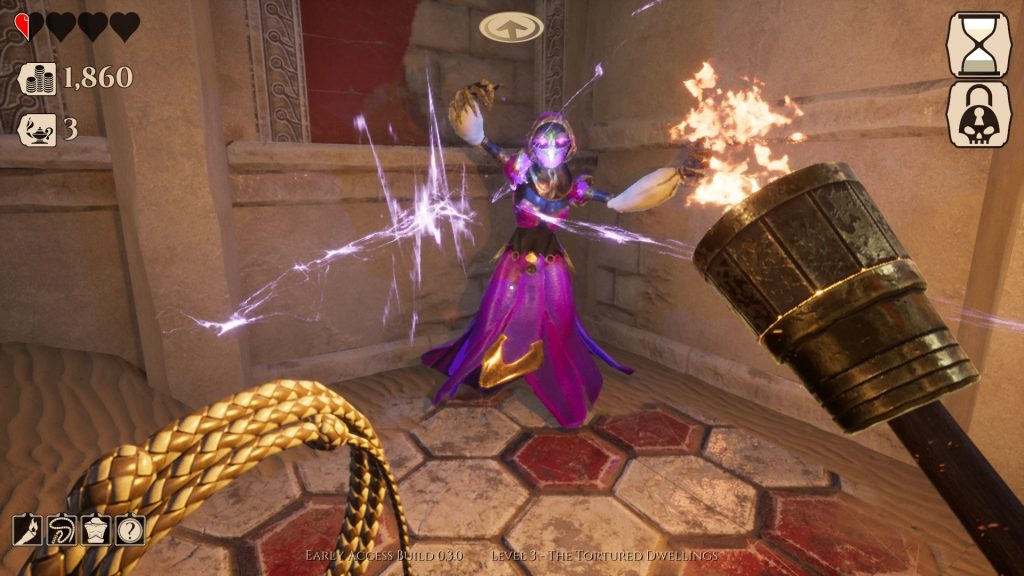 The game is Early Access with no release date at present. Priced at £18.99, it is quite a big ask for an early buy-in. However, it’s incredibly well polished, with beautiful graphics and feels quite frankly, fairly complete to me with a respectable amount of playtime available. The daily timed challenge with leaderboards is certainly an incentive to return, but more interesting and unique challenges could make this something people return to even if they’re pros who can complete the game every run. You do unlock “divine burdens” as you play and gain achievements, which make the game even more challenging to complete.

It could certainly have a bit more depth with more items, more enemies, more traps and more rooms and it looks like these are all planned for the future anyway. If I’d played this and been told it was a full release, I’d still be giving it a thumbs up, so I’m pretty satisfied with the Early Access experience here.

I would recommend this game to fans of rogue-lite and one-shot games, but it’ll be of special interest to those who enjoy speedruns and timed challenges as well. Right, I’m going back in for one more try…

About Athravan
Athravan - Christy - joined the WGN in February 2016. A keen writer and reviewer, she is currently the Editor of the Welsh Gaming Network. She lives in Cardiff with her husband and son, who was born in 2017. You can follow her Steam Curator "Play with Ath" by clicking the website link below.
View All Posts by Author
Visit Author Website
Rockape Plays Mushroom Wars
Vemico Action Cam