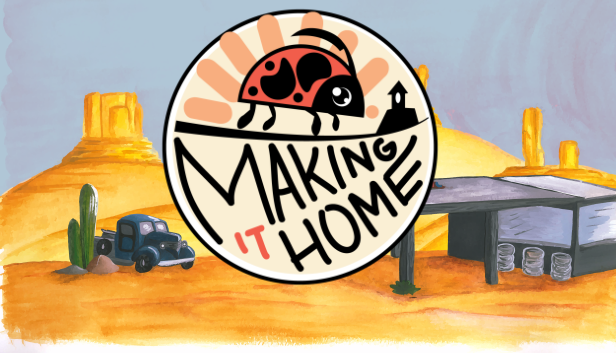 This is an Early Access look at Making It Home by developer Pillbug Interactive released on 6th August 2020 through Steam. The publisher provided the writer with a beta key for the purposes of streaming and promotion.

Making It Home is a classic indie mash-up of ideas. Welsh developers Pillbug Interactive have mixed platforming, vehicle-building and tool management into a pot and produced one ladybird’s trek across America. It sounds bonkers – and it is. But it’s also shaping up to be something really interesting.

Read Athravan’s Interview with Pillbug Interactive in 2018 after their release of Cycle 28.

What is Making It Home?

Making it Home is a vehicle building game. You’re a ladybug building a marvellous contraption to travel from one side of America to the other. Bounce around your vehicle, hoisting sails, squeezing bellows, and spinning propellers. How will you make it home?

At its core, you have the vehicle-building system. You have various blocks that you stick together to drive your vehicle forward, like sails, propellers and engines. Funds to build with are limited initially, but you earn more while travelling, allowing you to make better vehicles. It’s very reminiscent of Banjo-Kazooie: Nuts & Bolts‘ vehicle building, although simplified by the 2D orientation.

As you travel from stop to stop on your journey, you unlock more parts too, some of which work together. For example, there are solar panels that need electric motors to produce thrust. With weight, complexity and combinations to figure out… There’s a lot to try in optimising your ride. The joy of Making It Home is experimentation with these blocks, and how to get to your next stop quickest. Helpfully, the devs have recently added a few numbers to help you better judge their impact – something that was missing a few months ago but is a big improvement.

Once underway, you’ll have to manage the vehicle to keep your speed up. Most of the blocks require some interaction – sails require hoisting, propellers turning, solar panels cleaning… Then you need to jump around to collect coins, deal with distractions & obstacles… It becomes pretty hectic, and some of your early drives will be slow. But after finishing an Act, you’ll unlock a block permanently – making future trips easier. It feels a bit like those catapult games like Burrito Bison – repeating the journey with better upgrades, trying to get a little faster every time. It compels you to play one-more-trip in the same way that catapult games do, too.

The gameplay lies over a surprisingly mature story for a game full of cutesy, anthropomorphic animals. At stops on your journey, you’re introduced to smoking crabs, bee-children and other characters. The story tackles deep topics like loss, and depression. With colourful graphics and creatures to balance it out, it doesn’t feel as heavy as it is. You’ll definitely have favourite characters once you’ve played a couple of runs on an act.

The story also branches with multiple choices for dialogue at the stops, providing new character discoveries with each run. It’s just as well as you’ll be playing the same path multiple times to unlock more vehicle blocks and stars, and to finally win against the Act “bosses”. The branching dialogue is not necessarily signposted too well, though. I nearly missed the additional details as I assumed the different options would get the same responses. This is something that could be easily fixed by full release – and I hope it’s looked at as it’d be a shame for new players to miss the story by skipping through on later runs.

As an Early Access title, you expect rough edges and changes per-play. There are currently two out of three acts available, so the whole story isn’t told yet. Controller support is mixed at the moment – it works for the drives/platforming, but not for the building. This was fine for me, but won’t suit everyone. Challenge mode is also a cool additional mode to experiment in, particularly with new components and much higher budgets, and has room to grow.

There’s already been a lot of work put in since I streamed it a few months ago. It’s heartening to see the work of this two-man team ticking along nicely. I’m keen to go back and experiment more in the challenge mode, and to uncover the third act when that’s released. For such a mixed bag of genres to come together – and somehow work – is a great sign. I really hope Pillbug Interactive can drive this one home to the finish line.

Want to see some footage? Rockape uploaded 10 minutes of first impressions as well.

About SoupaBuoy
Rhys (SoupaBuoy) is a Cardiff-born creative and avid gamer. He is currently a Walkthrough Overseer at TrueAchievements, having previously been a member of their YouTube team too. He's recently branched out into streaming and loves platformers, puzzle games and RPGs.
View All Posts by Author
Visit Author Website
Review: Maid of Sker (PC)
Humble Choice August: Pick’n’Mix Rundown