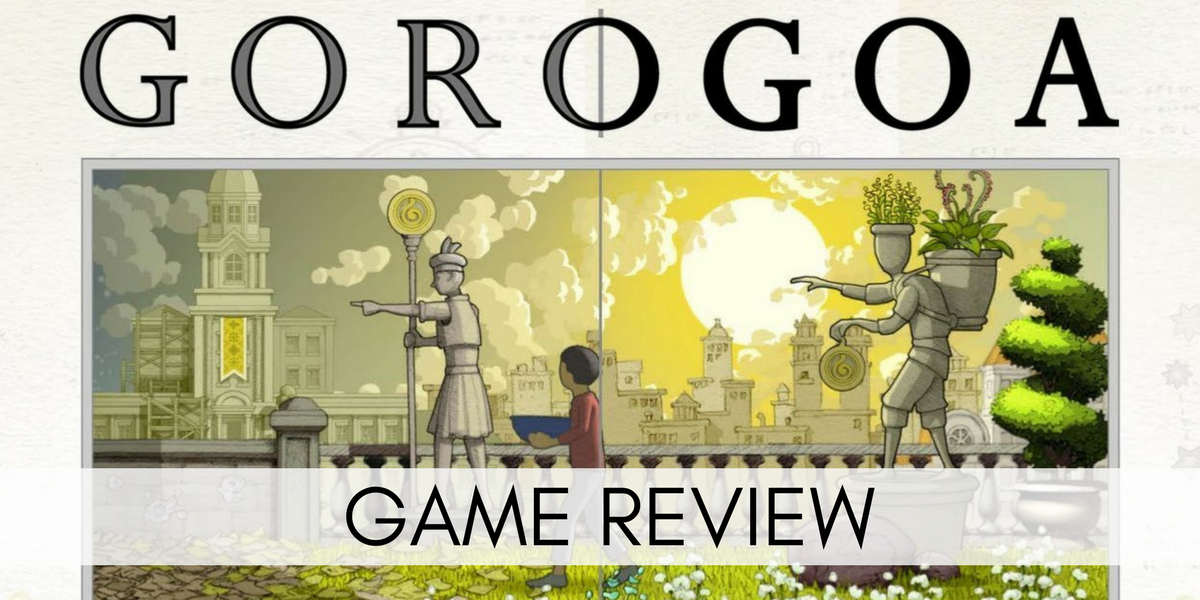 Gorogoa released on the 14th December 2018 and is available on Steam for £11.39 as well as on iOS and Nintendo Switch.  It is a debut story-driven puzzle game by Jason Roberts published by Annaourna Interactive. You can keep up to date with Gorogoa news on Twitter and their website.

Gorogoa is a thoughtful story-driven, puzzle game where you help a young boy on his journey to collect five mysterious orbs. The game is structured into four square panels which the player can can move around and overlap to solve puzzles. Released late last year, Gorogoa quickly made it onto many game critic’s best games of 2017 lists and currently has an ‘overwhelmingly positive’ tag on Steam. I played it earlier this year and its praise is well deserved. It’s a beautifully crafted game that took the developer, Jason Roberts, seven years to make and you can see the thought and care from those years in every detail throughout the game. 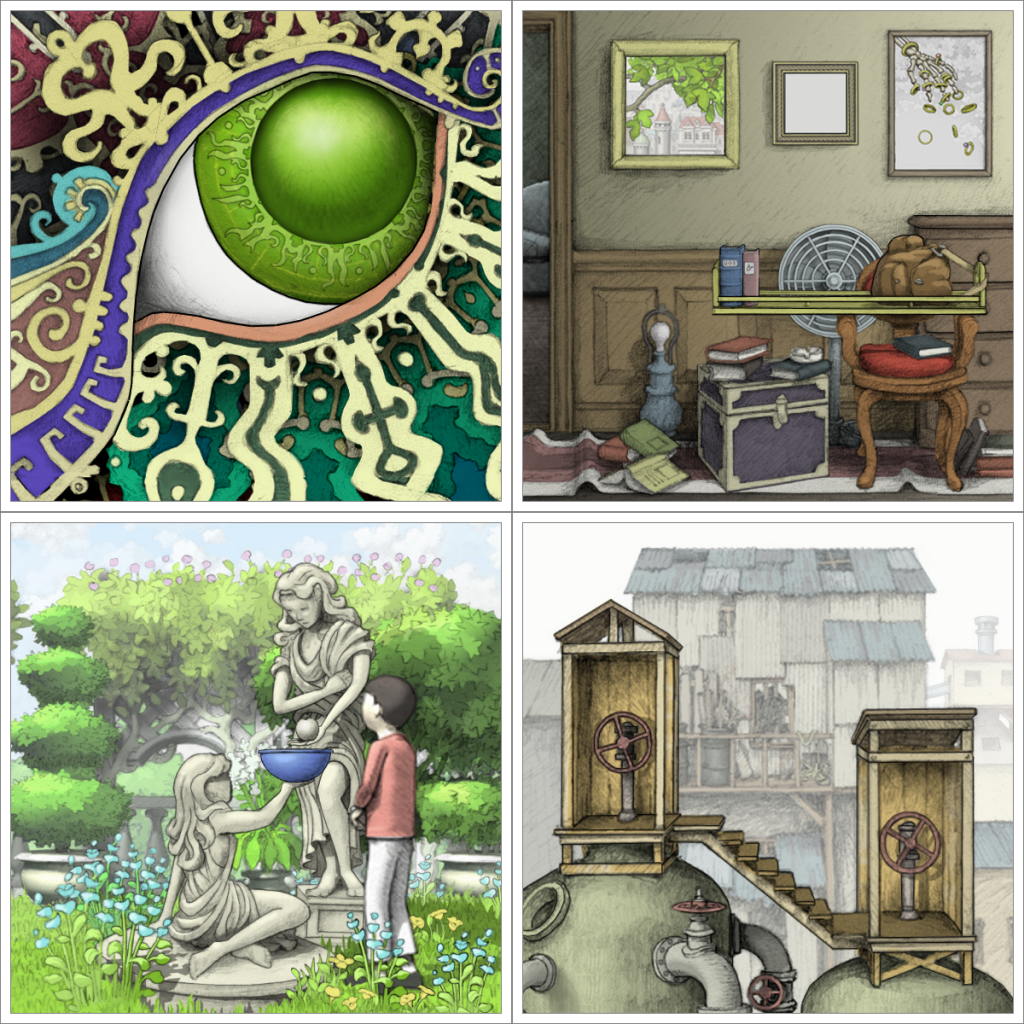 Gorogoa opens with a single panel showing the rooftops of a city, as colossal monster sweeps past in-between the roof tops, its eye peeping through the gaps. As the panel zooms out we see a boy who has spotted the beast through his open window. He begins to try and find a picture of the monster in his book and finds that the creature is connected to five hidden orbs. The boy decides to find these orbs and begins his journey. There is no dialogue or text so the narrative is told completely through its lavish visuals.

As the game continues we get to see parts of the boy’s future. Fragments of his life as a child, an adult and an old man are delicately weaved into the narrative. The surreal, imaginative landscapes that the boy visits against the harsh realities of his adult life in the ‘real world’ conjure up a dreamlike, melancholy story of spirituality, religion, peace and war. Due to all the time hoping and silent story-telling, some of the finer details of the narrative can be easily missed on the first playthrough, especially when you are simultaneously trying to solve puzzles. Playing through a second time, I was able to pay attention to details and understand another layer to the story. 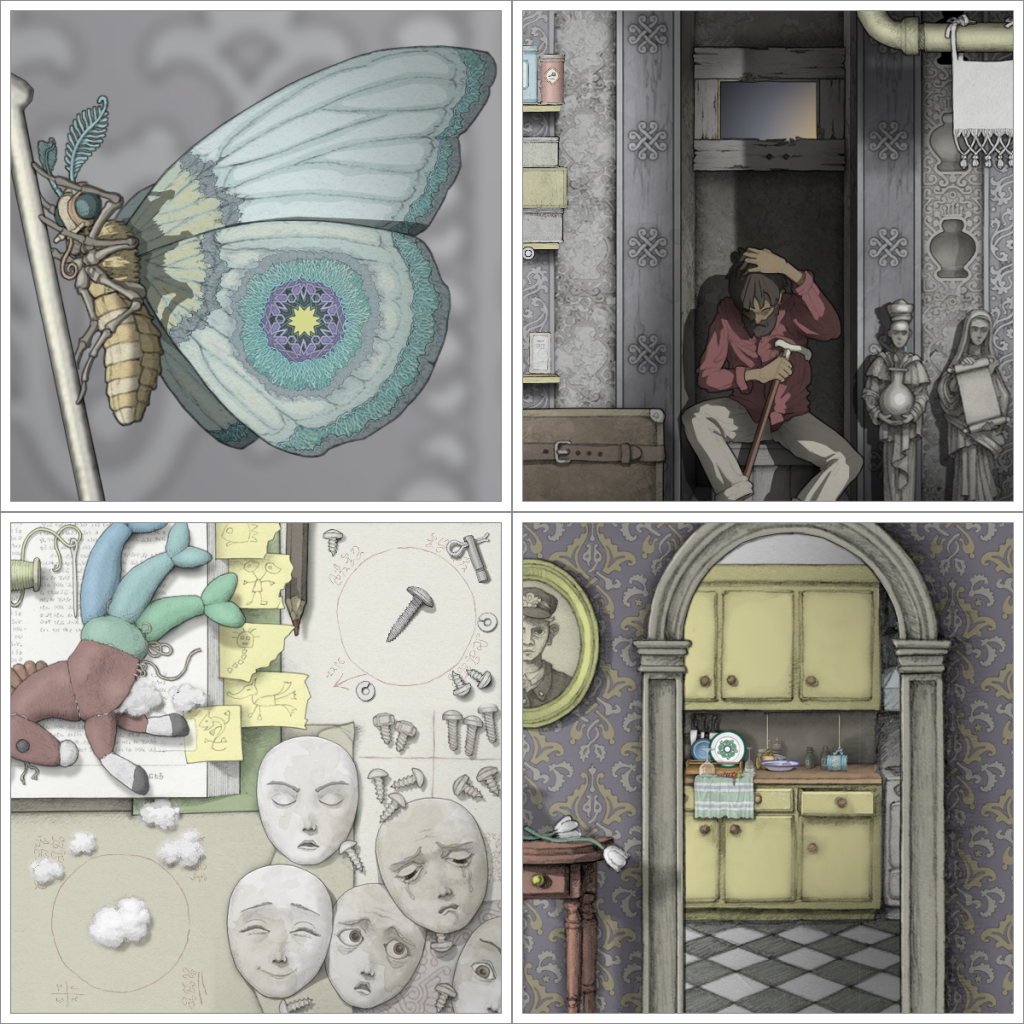 The puzzle design that Jason Roberts has designed is the big hype that surrounds Gorogoa. It’s unique, inventive, simple but complex and they rely on player curiosity and intuition instead of logic. The layout of the game is divided into four comic book-like panels which the player can move, overlay and switch around. Within each panel the player can click on objects such as doors or paintings and the panel will zoom into that space. Moving through frames gives new perspectives and clues to solving puzzles. Using the frame within a frame technique (or sub-framing) the player can move into and through different frame objects such as doorways, windows and paintings. With this style of puzzle, you don’t necessarily ‘solve’ the puzzles in Gorogoa, its more moving the panels to create stepping stones so the protagonist can continue his journey.

With shuffling all the panels around and zooming in and out of different frames, the puzzles in Gorogoa do get challenging but I never found any of the puzzles unfair. The difficultly gently increases in clever and innovative ways. You can tell that a lot of thought and creativity has been placed into developing the mechanics, it keeps pushing the puzzles in new and unexpected ways that are so clever and surprising.  The way the game uses the same puzzle mechanics as also a way to direct the story is masterful. Sometimes in games, the puzzles can feel awkwardly worked in next to the story, but in Gorogoa the story and puzzles interconnect so perfectly. 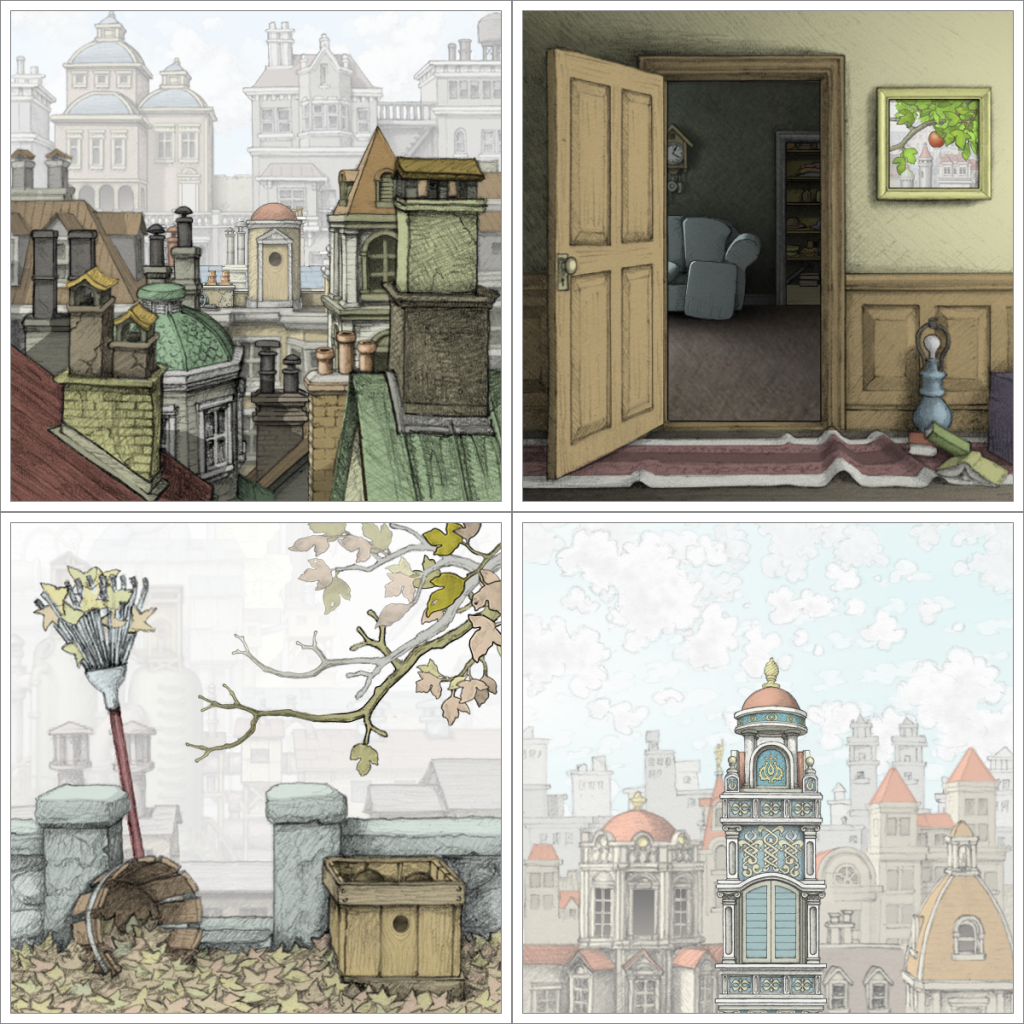 If you loved the perspective play in The Witness or the artful, puzzler Pavilion then I cannot recommend this game highly enough. From it’s detailed hand-drawn visuals, layered story and innovative puzzle style, Gorogoa is a beautifully crafted game and a proud highlight of videogames released in 2017.

About RachelW
Rachel is a freelance videogame writer from Cardiff. Wandering from the world of cinema into the realm of videogames, she is mostly interested in 'stop and smell the flowers' kind of games and enjoys tending to her virtual plants.
View All Posts by Author
Interview with Welsh game developer, Alex Horatio
Cardiff Anime & Gaming Con