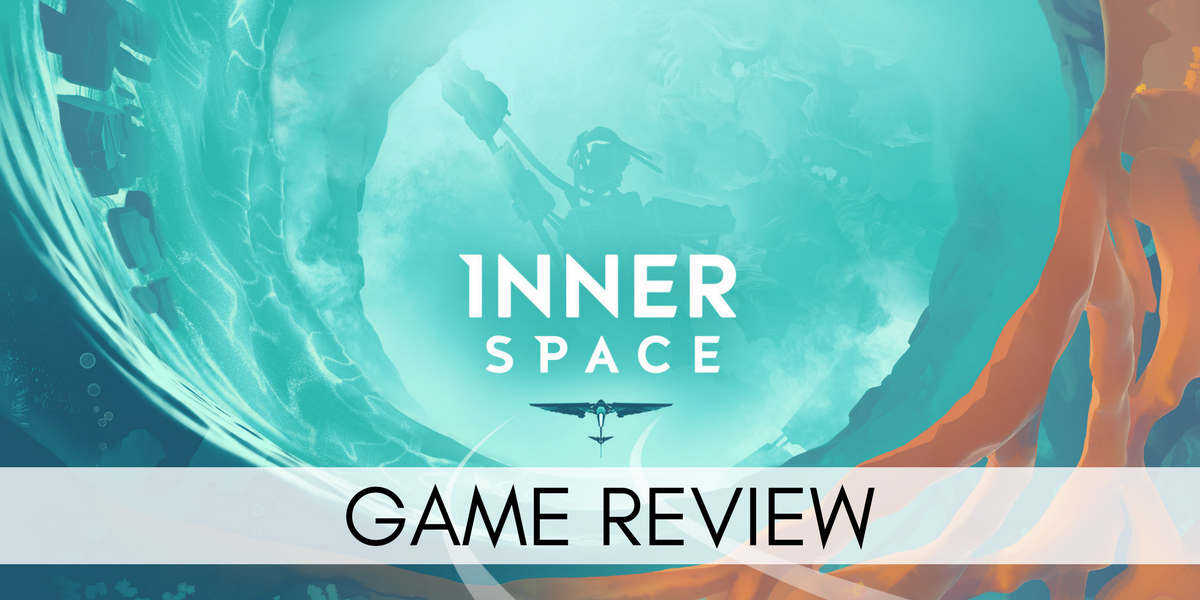 InnerSpace released on 16th January on Steam, Xbox One, PS4 and Nintendo Switch at $19.99. The developer / publisher provided Athravan with a pre-release copy of the game through the Steam Curator Connect system. You can follow Play with Ath (Curator) to have her recommendations integrated with your Steam store.

InnerSpace, by PolyKnight Games, is the exploration of an inverted spherical world. Powered by an ancient civilization now long gone, you, the Cartographer and your companion, the Archaeologist, are trying to discover the secrets of the beautiful yet surreal surroundings. You’re basically a mini transformer that can be a plane or submarine, allowing you to soar through the landscape and plunge into the ocean. The Archaeologist rebuilt you, but you’re designed and created by the ancients that once thrived in this world, so you have the ability to harness their power and activate the contraptions they’ve left behind. To accompany you and help you discover the secrets of the past, creatures known in lore as the Demigods can be discovered.

This indie project, which was kickstarted in 2014 – going past the finishing line with a fairly modest $28,000 – is a semi-open exploration adventure. The narrative is a guide, teasing you with lore and offering you gentle assistance if you feel lost, but it doesn’t have to be followed exactly. Different chambers can be unlocked with minor puzzle elements and have a myriad of secrets in store. Wind is your energy and it sits tantalizingly close to the clifftops, nestled into the crevice of old skulls, buried beneath the ocean and secreted in hidden passageways. Wind is needed to upgrade your Airframe and to power new devices, alongside the plans – known as relics. Most of the gameplay is the mechanics of flying, drifting and diving and it took me a while to get used to the controls and the orientation. Although I’m a mouse and keyboard kinda gal, I did have to use a controller. I had some problems with keybinding on mouse and keyboard and found myself lacking the control or precision you need to play. Therefore, I’d personally say a controller is required, more than recommended.

In addition to collecting that elusive Wind, you’ll need to talk to ancient beings, unlock secrets by flipping switches, cutting levers and finding breakable points to smash through. Whilst the story is pretty simple – I did find it interesting and wanted to find out exactly what happened to these ancient beings and how they faded away into obscurity. There’s no voice acting though. The main draw is definitely that of air exploration, but the dialogue, lore, and story was a sweet touch.

The InnerSpace soundtrack is perfectly blended for the environment. Relaxing, chillout ambience, with moments of exhilaration or anticipation. Chasing the flock through the Mornsea was one of my favourite moments of the game and that was in majority down to the seamless blend of the animation and music, although the beautiful aesthetics certainly help.

It’s a relaxing journey, but those who want a challenge may find it a little too laid back, with no real risk element. The gameplay is unlocked from the start and doesn’t really progress, although we do unlock airframes that offer different strengths and weaknesses. It turns out I prefer the first Airframe unlocked after the tutorial, it’s the most maneuverable and the fact that it doesn’t have speed on its side is actually a boon to someone fairly inexperienced with controller movement like me. It’s called the piano airframe, and moving the wing tips yield musical notes, which probably delighted me way more than it would most. I feel a bit sad that more wasn’t made of upgrades and progression. Whilst the inverted physics realm is pretty cool in theory – it gets very disorientating, especially when you start crashing out and end up bouncing from place to place with no idea of what’s happening. It’s a neat idea, but it did get a bit tiresome.

This is definitely a game for those who just enjoy drifting and exploring and for those who like the artistic style. Despite the somewhat limited gameplay, I loved this game and unlocking each Demigod was a delight. I found myself coming back to it repeatedly – and always finding something new.

InnerSpace is a simple, beautiful and relaxing game. It’s limited in scope, but I highly recommend it to those looking for a chilled out experience.

As a warning – I suffer quite seriously from motion sickness. In some games, this can be experienced whilst I’m sitting in my chair because my weird brain gets its signals mixed up. Thanks, brain! Whilst a well-documented health phenomena, it’s still largely unexplained. I experienced some symptoms when doing repetitive loops in this game; after circling upside down for a few minutes looking for a detail I did find my head was spinning, which continued after I’d closed the game. This may just be a random Ath fact and it doesn’t apply to you – but if you also tend to experience motion sickness or vertigo in some gaming environments, it’s worth being aware of. This is a game with continuous movement, sometimes in a very disorientating way due to the inverted physics, and the aesthetics of the game mean it can be hard to find something for the eyes to focus on. If you do start getting a headache, dizziness or nausea, pause the game and take a break. If this does affect you seriously, you will find out within the first 2 hours of the game and thus be within the refund window.

About Athravan
Athravan - Christy - joined the WGN in February 2016. A keen writer and reviewer, she is currently the Editor of the Welsh Gaming Network. She lives in Cardiff with her husband and son, who was born in 2017. You can follow her Steam Curator "Play with Ath" by clicking the website link below.
View All Posts by Author
Visit Author Website
Games to look forward to in 2018
Nantucket