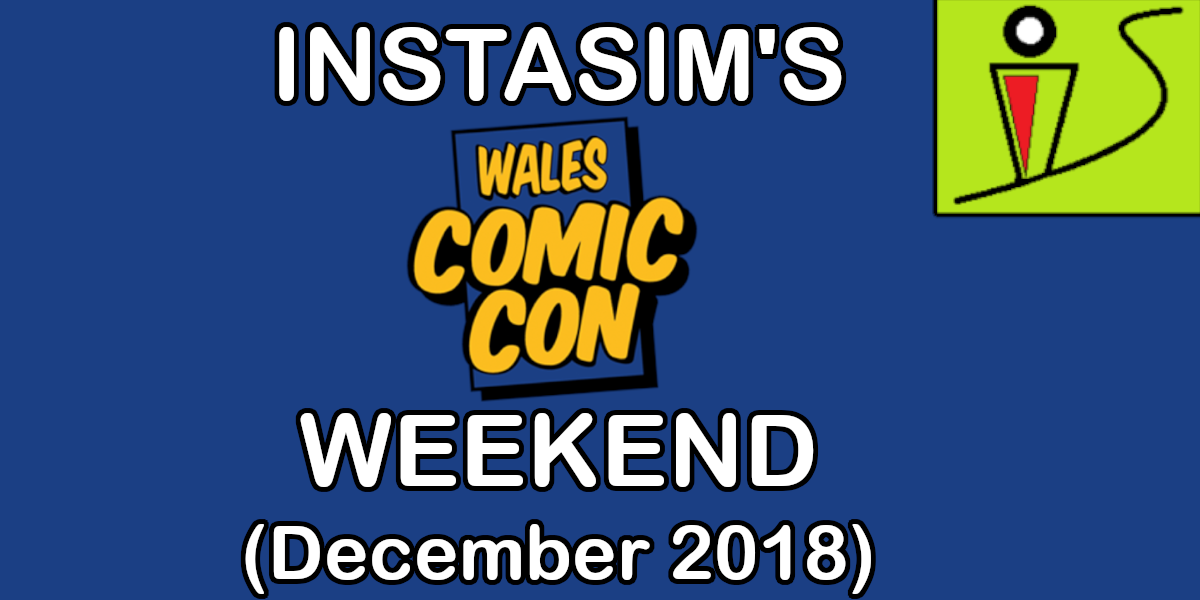 On the 1st and 2nd of December, 2018, InstaSim attended Wales Comic Con. Find out his experience of the event along with what activities he got up to during the weekend here.
SHARE
Facebook
F
Twitter
T
Google
G
Pinterest
P
COMMENTS
Spread the love

Wales Comic Con 2018 Part 2 took place on the 1st and 2nd of December 2018. This year the event was celebrating it’s 10-year anniversary and as such, had an incredible line-up of celebrities attending the event.

The line-up included many stars from the world of Wrestling and WWE®, along with cast members from popular TV Shows and Movies such as Doctor Who, Game of Thrones, Harry Potter, Lord of the Rings, and many more. These gave the chance for the general public to have items signed, have photo-ops and attend Q&A Sessions.

As well as the incredible line-up of celebrities, as has been the case at Wales Comic Con previously, there was also a Games Lounge. Here people could come and play some games, including Upcoming Releases and games made by Glyndŵr University Games Development Students. There was also a Gaming Stage for people to take part in some games on the Nintendo Switch and take part in a friendly competition against other attendees of the event, as well as a raffle on both days for people to win some great prizes.

A Weekend of Vlogging

With big thanks to Athravan I was very fortunate to have secured a Press Pass to attend the event on the weekend. As such, I decided to dedicate most of my time to vlogging the event and recording interviews with game developers and cosplayers. This turned out to be very successful with plenty of content from both days to have a couple of videos made. The videos from the event can be found here:

Over the course of both days, I managed to get a chance to play a lot of really cool games and interview some of the developers. I also got the chance to meet a few people who were cosplaying at the event, including WGN’s very own RageDarling cosplaying as Tracer from Overwatch.

On the Sunday, as well, I managed to get a chance to interview a few of the cast from Harry Potter which I was very pleased about and I also attended the Harry Potter Q&A Session.

So let’s kick things off with the first day of Wales Comic Con. The day went quite alright. We managed to enter the event quite early on due to the securing of Press Passes, which was incredibly lucky as the General Admittance and Early Bird queues were massive. With 2 Press Passes secured, I decided to invite a friend along to help with filming as well. Most of the morning was taken up with recording the opening montage of the video as we went around the exhibits before it became too busy. In the afternoon, we then had a chance to play a few games and meet people.

Pocket Adventures is a mobile AR Game which is being developed for both Android and Apple devices. TMT have also received funding to develop the game by the Welsh Assembly Government which is targeted towards younger kids to get them out and about and to get a bit of exercise as well. In January, they will be testing the game out in Loggerheads County Park in Denbighshire, and the game itself is expected to launch in April.

The app works by looking for different markers which contains a mini-game that can be played. At Wales Comic Con, there was a memory game, a picture puzzle, a game of basketball and Whack-a-Mole. Each mini-game is relatively short in length to allow enough time to complete the mini-game and to move on quickly to the following marker.

A game that I’ve been personally looking forward to, and have been following the development of for a few months, is Annwn (Demo available on Steam now). Developed by Quantum Sound Studios, the game itself puts the player on an island which is being guarded by a sentinel which deploys hounds of Annwn occasionally.

During my interview with the developer, Chris Payne, he talked about what inspired him to develop Annwn and how he got into Games Development originally as well. To follow the development of Annwn, it is possible to do so from their website and Twitter.

The second day of Wales Comic Con was just as much of a blast as the first, with a few more things for me to cover on video. The event that stood out on the day, of course, was the Harry Potter Q&A. As was the case on the Saturday, I also managed to get some interviews with game developers and cosplayers, and as an addition to all the interviews, I was also fortunate to be given the chance to have one-to-one interviews with some of the cast members from Harry Potter.

This time at Wales Comic Con, there were 5 cast members from Harry Potter:

Out of the 5, I managed to get an interview with 4 which was an amazing opportunity as I am a really big fan of the Harry Potter series in general. Although the interviews could’ve gone better, this does give me something to improve on in the future.

When it came to the Harry Potter Q&A, I was very fortunate to be granted permission to film a few segments for my vlog, of which I managed to film a section of the Q&A where David Bradley did a bit of dancing.

Warriors Of Ragnarök – Round Squares Studios

Another games studio started by former students of Glyndŵr University is Round Squares Studios, and they were showcasing their game Warriors Of Ragnarök, which is a top-down, real-time, tower defence game where you have to protect the realm “Midgard” from the other 8 realms in the game.

Showcasing the game at Wales Comic Con was the managing director of Round Square Studios, Ricky Barnett, who I had the pleasure to interview about the game.

The game itself started as part of a university assignment during the Master’s program to develop a game, and following on from the course, Ricky, along with his business partner, decided to carry on developing the game ready to release on Steam. There is currently no release date for Warriors Of Ragnarök, although the game will soon be available on Early Access through Steam.

During the interview, we discussed the very successful UK Games Fund Awards Ceremony, with Rich winning the Community Contributor award, and Glyndŵr University winning the Tranzfuser Local Hub of the Year. Static Shell Studios, one of the university’s many successful games studios, also won the Tranzfuser Award at the ceremony.

We also discussed EGX, which happened in September, and talked about the successes achieved during the event. Samurai Duck, a studio from Glyndŵr University, were the nominees this year showcasing Eden’s Grasp and Rich, along with a small team of Games Development students, were there to support the studio during the event. Rich also organises an annual trip to EGX for Games Development and Computing students at Glyndŵr University.

As is a regular occurrence at Wales Comic Con, many people like to attend the event dressed up as their favourite characters from video games, movies, TV Shows and anime, and this year was no exception. With cosplayers from many different franchises including Overwatch, Doctor Who, Batman, Dragon Ball Z, and many many more, there was bound to be a character for everyone to meet throughout the 2 days.

I was also very fortunate to interview a few cosplayers as well. On Saturday, I managed to find WGN’s very own RageDarling cosplaying as Tracer from Overwatch, as well as a group cosplaying as different characters from Dragon Ball Z. On Sunday, we met up with some Storm Troopers, some characters from Monty Python and the Holy Grail and even got a chance to meet Santa Clause who decided to come down to Wales Comic Con for the day.

The big event for cosplayers however, was at the end of the day on Sunday where there was a Cosplay Masquerade, which happened at the William Aston Hall. I managed to film some of the masquerade, although due to late running, I wasn’t able to stay for very long as I had other commitments later on.

Conclusion to the weekend

So in conclusion to the weekend at Wales Comic Con, I thoroughly enjoyed my time at the event, and was very happy to have been granted a Press Pass to the event as well, with big thanks to Athravan of the Welsh Gaming Network for securing the Press Passes for the weekend.

The weekend was a lot of fun, and I really enjoyed being able to vlog at the event and to secure a few interviews with some of the guests attending the event, and I really hope I get the chance to do it again next time.

Be sure to check back on the WGN website, Discord and Twitter for details on Wales Comic Con 2019.