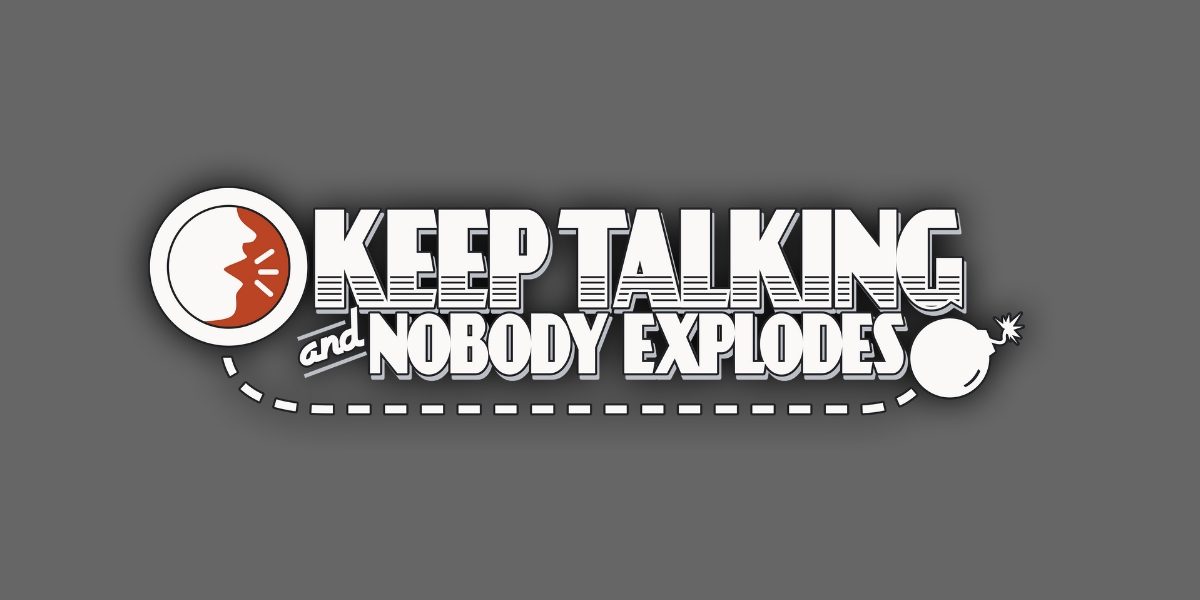 Keep Talking And Nobody Explodes!

James reviews Keep Talking and Nobody Explodes - a bomb defusing game that aims to bring the thrilling and tense atmosphere of action films to your next party!
SHARE
Facebook
F
Twitter
T
Google
G
Pinterest
P
COMMENTS
Spread the love

Keep Talking and Nobody Explodes (KTaNE) is a bomb defusing game made by Steel Crate Games – a 3 man team that originally created the concept at Global Game Jam 2014 – that aims to bring the thrilling and tense atmosphere of action films to your next party! Steel Crate Games kindly provided the Welsh Gaming Network with a review key for the Nintendo Switch.

The game is split into two parts: the bomb defuser and their trusted team of experts. Together you and up to 3 other players take on the role of solving ingenious puzzles using only the bomb defusing manual and your abilities to communicate effectively, for there is a catch: the player who is defusing the bomb cannot see the defusing guide and must rely on the advice of experts who can read the manual but cannot see the bomb itself.

Keep Talking and Nobody Explodes is now available on a multitude of platforms, with the Nintendo Switch being the latest release in August this year. It’s available on the Nintendo E-shop, as well as Steam and Humble Bundle for the PC, Xbox One, PS4 and Google Play Store (Android). Virtual Reality versions are available on Oculus and Samsung Gear.

The game is played by a minimum of two players in this fashion. Upon first boot, the game will provide you with a link and will ask for a code to verify you have the correct copy of the bomb defusal manual. Sadly this manual is not physical and as such, requires you to download and print. After that is a short tutorial teaching you how to move around various segment of the bomb such as interacting with various modules or rotating the bomb. After this, you just pick either a specific challenge level or create a random bomb using mutators available in free play, and begin. You will be given somewhere around 5 minutes (it’s variable) to solve the bomb, but if you mess up you will speed up the timer. Be warned, three strikes…and BOOM! Of course, you’ll have no idea what to do, so let’s enlist in the help of the bomb defusal experts.

From this perspective, the aim is to work out what modules are situated on the bomb, and guide the defusal team around each of the progressively more difficult modules. Each module varies in activity, from cutting coloured wires, to interpreting morse code messages; activating a coloured button at just the right time, to working out the right order to decipher a secret message. For most of my play time, I worked as the defusal agent and the biggest thing I noticed was that I am incredibly bad at communicating exactly what I’m seeing. Many times my lack of full communication got us blown up but my girlfriend great at deciphering the nonsense information I was giving her and managed to save us in the nick of time. The biggest difficulty I faced was trying to interpret the morse code messages, something that infuriated us greatly. I can recall trying to work out the exact pattern by making beeping noises in time with the light, managing to defuse the bomb with 1.5 seconds to spare.

In my experience, this game would settle in very nicely at parties between myself and some of my gaming friends. The portability of the switch really benefits here as it means that bringing a party game no longer requires brining a larger console or PC. It has similarities to JackBox in this respect, making the game so accessible that you only require one copy of the game and a couple of sheets of paper. Overall, I can see this game becoming a staple at party events and I look forward to seeing if any further developments will be released, maybe in the form of more modules or more bonus levels.

About James Grant
Hey everyone! I'm James, a writer and the Overwatch Team Captain for WGN! I've been a big gaming nerd since the age of three, growing up on the likes of Sonic, Pokemon, Tekken, and the like. When I'm not gaming on any device I can get my hands on, I'm working my way through a Computer Science degree and would love to develop a game someday. Do you want to suggest a game for me to review? Tweet me with a game and I'll try my best to play it.
View All Posts by Author
Megaquarium
Hollow Knight, Nintendo Switch