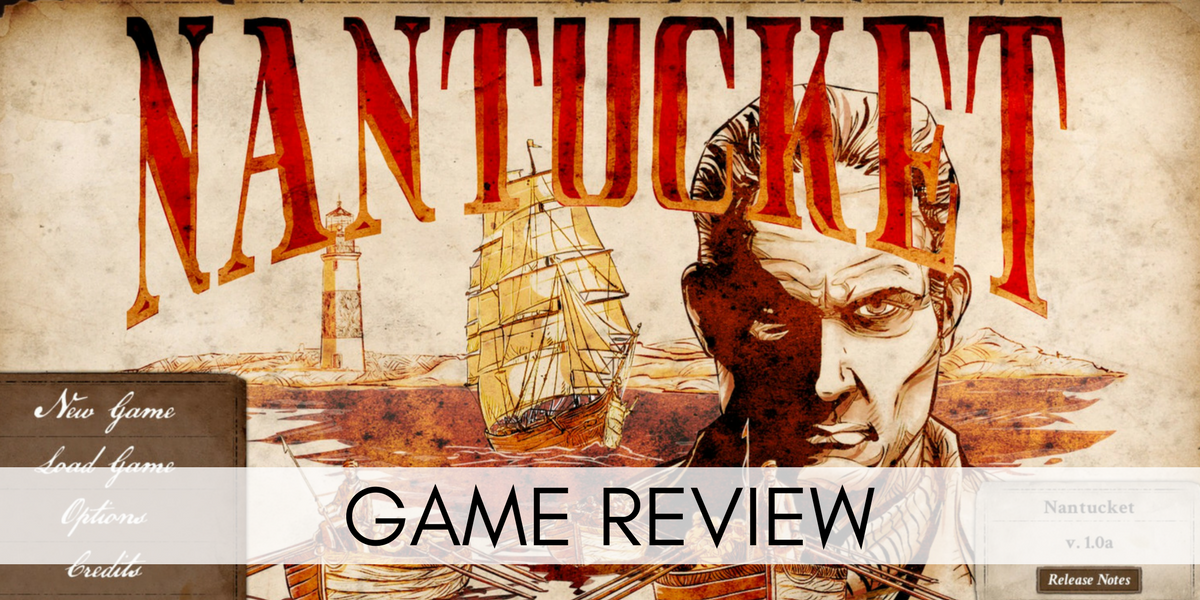 Compelling and addictive, Nantucket is a story-driven strategy RPG set in the time of the historical whaling industry. The hunt for Moby Dick is on!
SHARE
Facebook
F
Twitter
T
Google
G
Pinterest
P
COMMENTS
Spread the love

Nantucket released on Steam on 18th January 2018, and is available for £13.99. This is the first game from developer Picaresque Studio, who provided Athravan with a review copy. You can follow them on Twitter for further News.

Nantucket is a strategy RPG set in the time of whaling – we are searching for the infamous Moby Dick of Melville fame, but have to start at the bottom and steadily but surely build up our crew and ship until we have the strength needed to wreak vengeance. Coated in blood and blubber, my ship sails into port, my crew heading to the tavern to spend their violent gains whilst I stock and supply the boat, fix the sails and upgrade the cannons. There is an authentic aesthetic and atmosphere to this game as well as a delightful attention to detail. You’ll get sea shanties galore and for those who are interested in whaling and historical sea-faring, this game offers an insight into a historical period that’s not well explored in gaming. Sure, pirates games are everywhere and I understand why – but the whaling industry was an interesting time where brutal danger and economics merged, which is reflected well whilst playing. 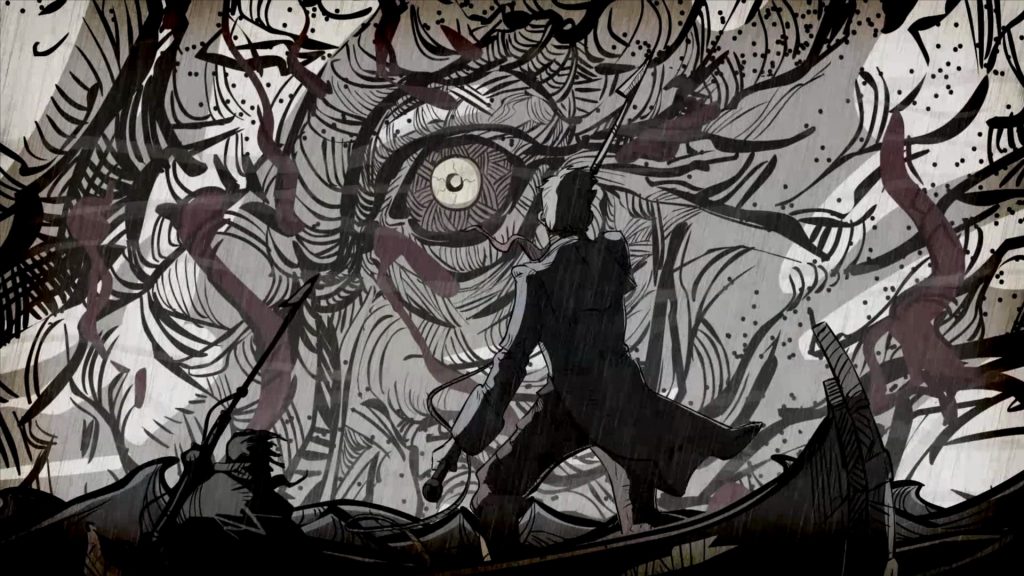 We start off with a tiny rotten ship, holding just three crew and a couple of whales worth of blubber. Upgrading takes cash and we’ve just spent it all on loading up on grog, food and water, so we need to make a killing. The newspaper tells me there’s potentially a new whaling area and gives me the co-ordinates, so we set off. Days pass and I navigate around a storm – I definitely don’t have the skill to survive that right now – and take a minor detour around a perilous seabed, but eventually I arrive. Fins ahoy! I can finally start to build my way up to a fully manned crew on a massive frigate, enough to one day take on Moby D himself! 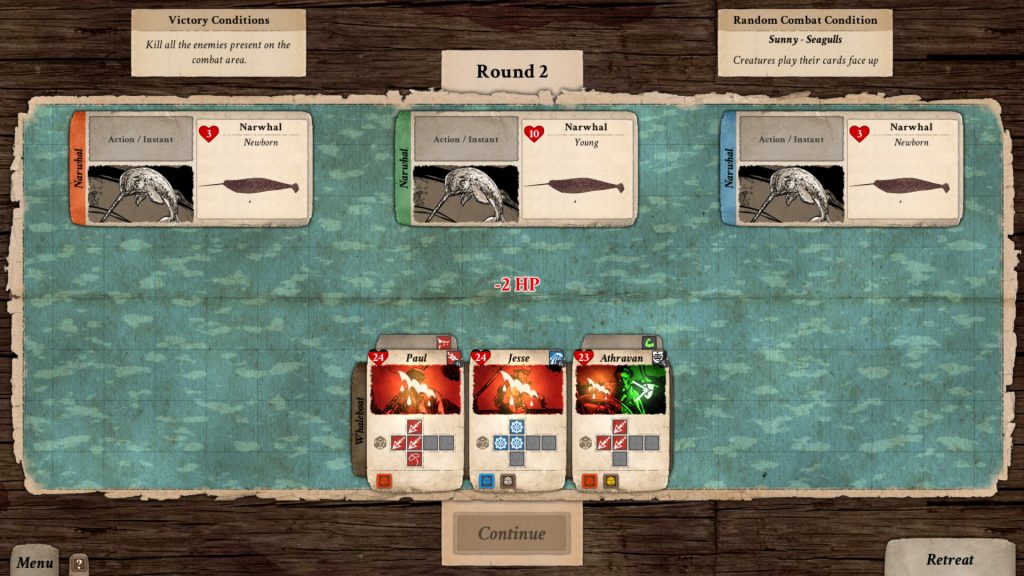 The combat is slow and strategic. You can take three crew per whaleboat (so that’s 9 crew on a larger ship) including yourself if you want to risk your life and each crew member has a skill set based on their class and level. With each turn you roll the dice and pray to Neptune that the wind is in your favour. Opponents similarily have a skill set based on their animal type or pirate class and random event cards play each turn that may be in your favour or against you. Death is permanent; but that’s life on a whaler and you can always replace your crew at port. As you progress, higher prestige will allow you to recruit sailors with higher starting levels and traits, so that the crew progression doesn’t feel too grindy and there are points when you’ll want to fire someone and hire someone different anyway, so don’t get too attached to anyone. I felt a little guilty firing one of my many gay lovers (yeah, that’s a thing) but I quickly moved on. You don’t get to be a whaling captain by being sentimental after all.

There’s quite a bit of choice in crew with a lot of classes available, each with different strengths and weaknesses. On top of that they can earn different traits, some which directly affect their working abilities, others which are more social and effect random events or narrative encounters. You can also gain special equipment which can be equipped by every crew member (1 piece each) and can change things up quite a bit. So there’s definitely a good chunk of variety here. In ship management you’ll be able to place your crew in different locations which will affect your progress in an authentic way. Crafters can repair the hull faster, cooks can provide morale bonus, some workers can convert blubber into oil if you have the technology, you’ll need a lookout with good vision and someone on the foredeck with a high sailing skill. Your crew needs to be balanced – those on board who can help you weather any storm, navigate around icebergs, negotiate with pirates or board them when it comes to it and of course your hunting team, who you need most of all to do the dirty work. 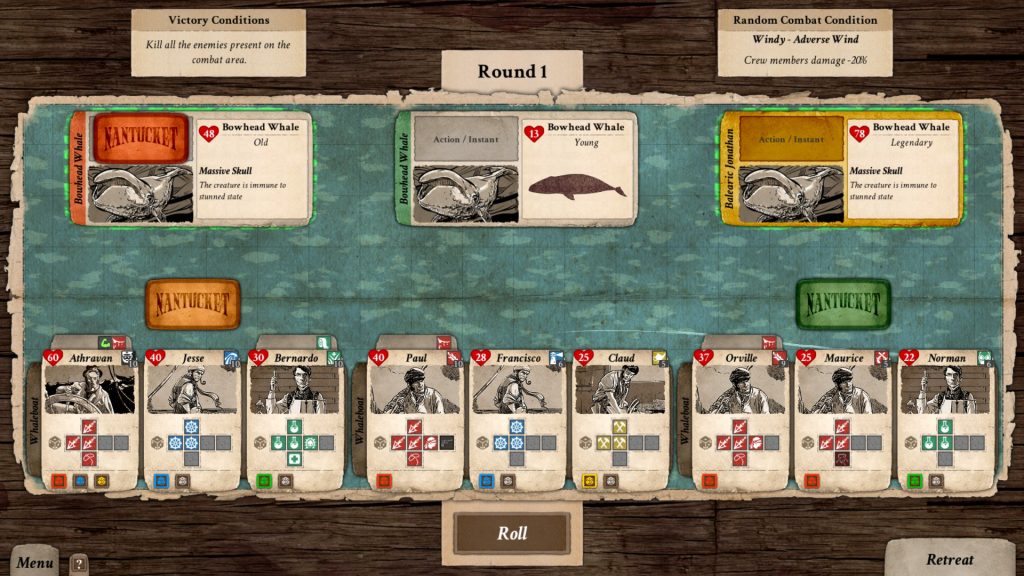 In short, there’s a lot of scope for tactical thinking and strategy at a detailed level.

Although the order in which you receive minor quests seems to be random, this is a static map and a story-driven game. You have a main quest and a map which has the same locations for the trading cities and whaling routes – based off historical representations. You’ll need to level up quite a bit to progress with the main story and upgrade your ship which takes a small fortune. How you earn that fortune is fairly open – you can track whales and focus on cargo space, you can fight pirates, you can do delivery missions or hunt down shipwrecks and all the time random side quests will be popping up with a fair variety of outcomes. Ultimately though you’ll come back to that main quest and the hunt for Moby Dick as you’re haunted by your experience and need closure.

This does mean that although your playstyle may be different to mine, ultimately there’s limited replayability to the game. I’d estimate the game takes about 20 hours depending on how much you grind and how many side quests you complete on normal – probably way more if you want to play it super safe and get the bulk (or all) of the achievements on seadog (read below!) 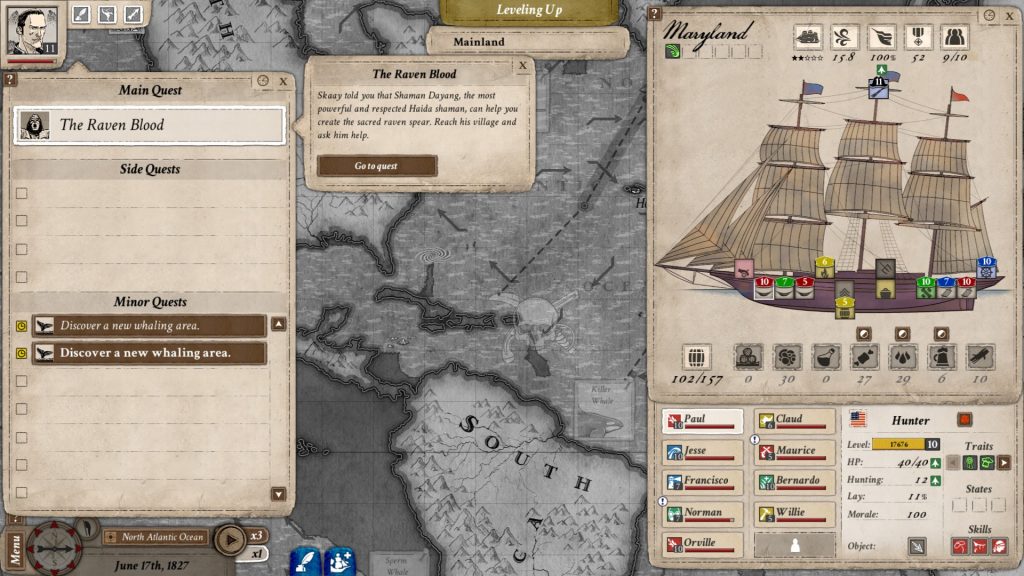 Damn the Dice and Difficulty

The main downside of this game that may put a few people off is the RNG. There’s always a fine balance to RNG and if that isn’t found, it can feel frustrating and unfair. The difficulty is tuned a little bit too much towards the unfair needle on this compass as you can sometimes die without having much choice in the matter. On harder fights, all it takes is a few bad dice rolls or a random event card that plays against you and the tides have turned.

There are two difficulties, normal and seadog where seadog essentially turns the game into a roguelike / ironman – one death and you’re out. I think that the RNG the game can lead to incredible frustration if you lose your entire game due to a dice roll completely out of your control, but if you’re playing on normal this won’t matter as you can just load up a save from a few minutes ago. However, the steam achievements only work in seadog mode, which makes me think this is how the developer wants people to play – but I lost an 8 hour playthrough on seadog difficulty when encountering a legendary whale for a quest. My captain was forced to take part in the encounter and retreat was grayed out, with triple my health, triple my damage and the ability to stun all three crew members at once, I literally did not stand a chance vs. this foe and had no indication before entering the fight that this would be the case. Since this game is ultimately a story-driven one where you’ll have to grind and repeat content again after game over, I’m not a fan of the seadog setting and abandoned my quest for achievements out of respect for my sanity (and time). 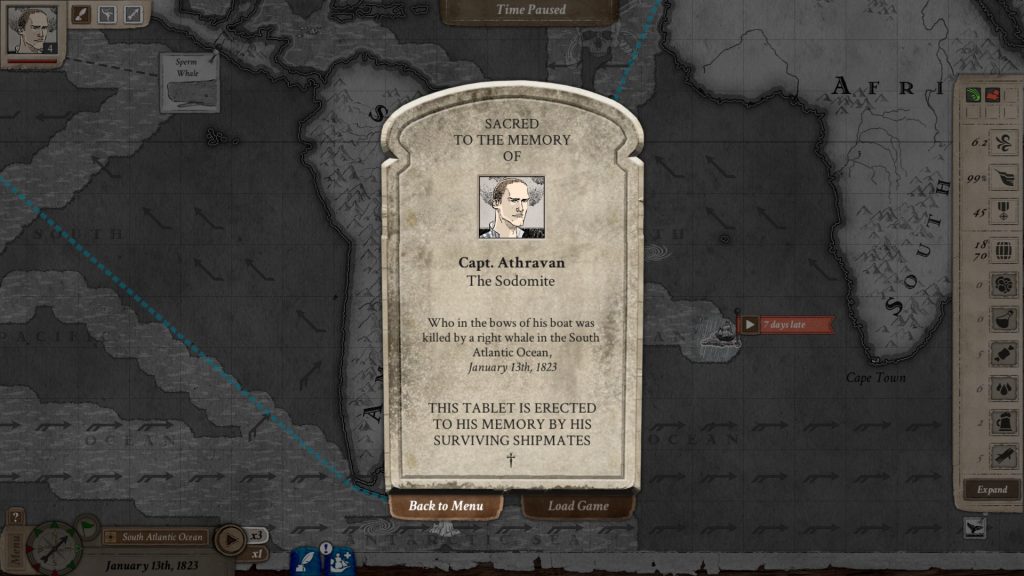 After I’d gotten over this hiccup and restarted on the normal setting (and spammed F5 every 3 minutes), I thoroughly enjoyed my playthrough.

Nantucket is a unique game in a setting little explored. It offers strategic depth and detail galore, and although marred a little bit by RNG, is a fun, satisfying game.

About Athravan
Athravan - Christy - joined the WGN in February 2016. A keen writer and reviewer, she is currently the Editor of the Welsh Gaming Network. She lives in Cardiff with her husband and son, who was born in 2017. You can follow her Steam Curator "Play with Ath" by clicking the website link below.
View All Posts by Author
Visit Author Website
InnerSpace
Interview with Welsh game developer, Alex Horatio