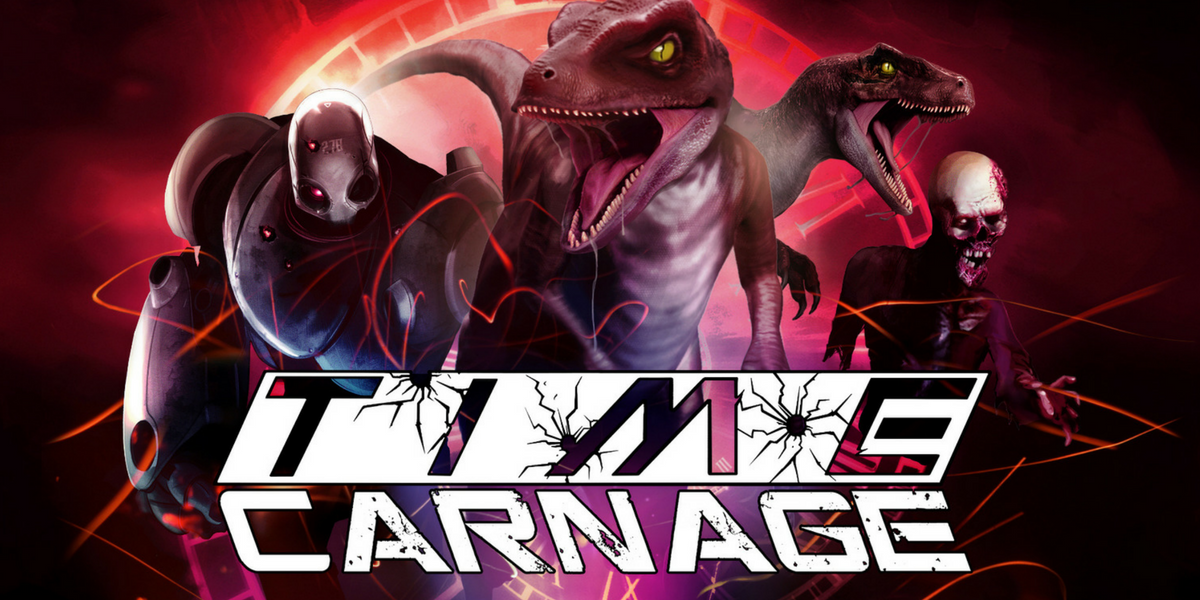 Do you like dinosaurs, monsters, robots and zombies? Are you interested in dipping your toes into the world of VR with a wave shooter? If so then Time Carnage may be the game you never knew you needed.

Time Carnage is the next title to be released by sunny South Wales-based indie game developers Wales Interactive who have previously developed and published titles such as The Bunker, Don’t Knock Twice and Late Shift across a number of platforms. The VR Shooter survival game aims to release April 2018 on PlayStation VR, HTC Vive and Oculus Rift. You can already add Time Carnage to your Steam wishlist to be notified on release.

Wales Interactive has once again decided to partner up with Perp Games who they previously worked alongside to release Don’t Knock Twice to PS4 and PSVR last year in order to bring Time Carnage to retail as a box release for the PlayStation VR.

The aim of the game is simple, stand toe to toe with waves of oncoming hostiles in the boots of a grizzled veteran soldier and go some to tell the tale to your grandkids one day.Oh did I mention you travel through time? Yeah that’s a thing your character can do apparently, he goes back and forth through time, leaving historical accuracy at the door in favor of a few more explosions…and I’m ok with that.

Time Carnage boats to have a 16-tier campaign and accompanying arcade mode to sink time into along with a set of 20 challenges that will allow you to unlock weapon perks and some quirky “arcade cheats”.

As you travel through time causing mayhem you will unlock and upgrade your arsenal with mix-and-match weapons which you can dual wield, gain access to time-altering perks and the above-mentioned cheats.

Check out these screenshots:

It looks like the sort of game the developers would have had a great laugh developing and price point depending I can see this title making its way into more than a few homes as a party piece.

Let us know if your thinking of giving Time Carnage a shot when it releases in April 2018 in the comments below.

About Forge
I'm a sweaty try hard, a filthy casual and everything in between. I've worked in and around the video games industry for a number of years and have loved every second of it.
View All Posts by Author
A look back at the Cardiff Anime & Gaming Con
Assassin’s Creed Unity
COMMENTS 32