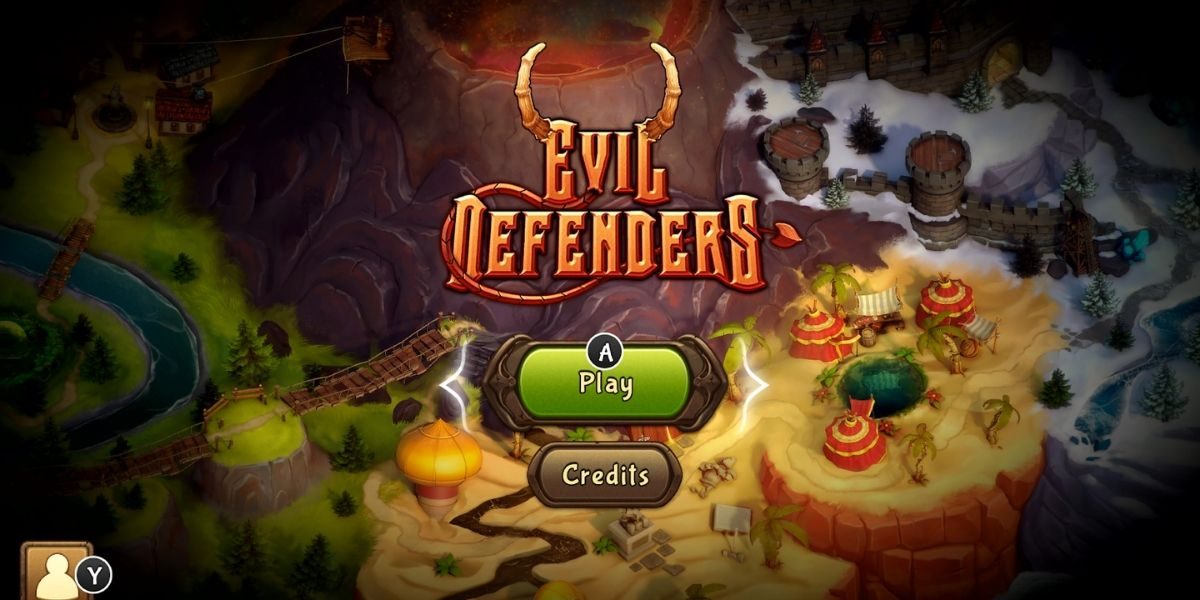 Evil Defenders came out in 2015 on Steam, but has just released in May 2019 for the Nintendo Switch and is priced at $9.99 / £7.19. Evil Defenders takes the usual trope of the “good guys” defending against monsters and the like, and flips it on it’s head allowing you to be the evil army needing to defend against pitchfork-wielding villagers, knights, wizards and all sorts of units who are greedily after your treasure.

The game features a gorgeous detailed overworld that serves as a kind of condensed version of the levels you play, like the first level of the river leading on to the swamp and then the high plateau with the rope bridges. This gives a nice sense of what to expect aesthetically, especially with that giant volcano looming overhead!

Gameplay wise it’s rather simple, kill the units to amass gold, spend said gold on towers and upgrades, I started playing this with the Nintendo Switch joycons, but I found each binding was awkward to remember and I found myself instead of speeding up the gameplay with X I’d accidentally hit Y sending the next wave over potentially ending my run early. I do however recommend this played in handheld mode as you get to use the touch screen to easily manipulate everything to your needs and much faster. I found having to use the joystick to aim where I wanted to use my lightning ability a bit tedious as the cursor wouldn’t quite follow where I wanted it to go.

The towers have a great progression system,  you can upgrade them twice for a stronger version of the basic tower, and after that, pick one of three variants, for example, the old crypt, which summons skeletons to fight for you, can be transformed into dark knights for close quarters damage and tankiness, skeleton archers which do damage at a distance to oncoming enemies, or change the tower to host a banshee which halts enemies and can scare them away for some crowd control. There really is a good amount of versatility in the 5 towers and their upgrades.

Each level can be played multiple times at higher difficulties to award more stars, up to 3 stars for each level for a total of 15, the higher difficulty levels also offer a bonus of souls-looking currency, of which is halved once you complete the challenge once, for example you receive 100 extra souls for completing nightmare difficulty once and 50 each time thereafter. These souls can be used to upgrade your towers in various ways and the cooldown abilities such as lightning strike, teleport and MacHellman.

Speaking of the upgrade system, there is a lot to potentially upgrade in this game, each tier of upgrades is locked behind the star system, but seeing as you can get 15 for completing just one level fully that’s not really an issue. The issue lies in the fact that the souls can be a major grind even in the early game, forcing you to repeat the first few levels over and over to get that boost in damage or bonus effect to give you that edge.

There is a pretty steep difficulty curve with this game, enemies don’t really get stronger, there are different types with different damage and health, but said health or damage stays consistent, there is just more of them, and the rate you acquire gold in the levels to buy more towers can be quite slow and one miss-buy can cost you the entire round.

About Kingstone
Avid Welsh gamer hailing from the distant 90's! Grew up with every nintendo console since the super nintendo. Loves a good RPG or retro sidescroller. Known to also play the occasional game of Overwatch. Hoping to lend his opinion on various games and hardware as they become available!
View All Posts by Author
LBRY-C Partners With The Welsh Gaming Network
Steam Summer Sale 2019