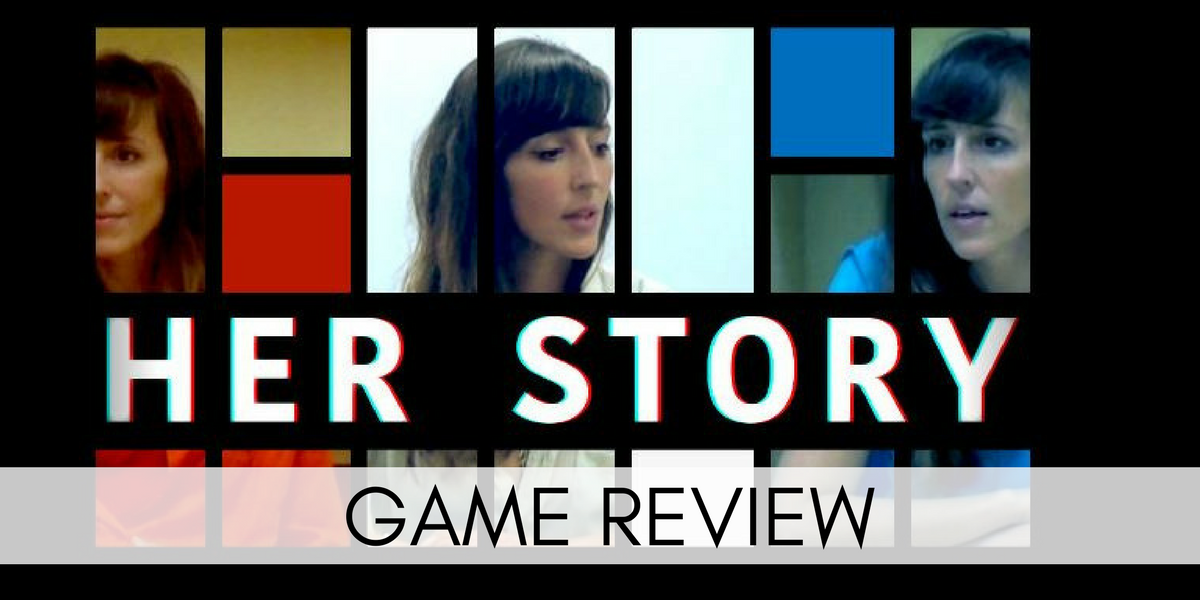 Brainz456 plays and reviews Her Story, an interactive exploratory crime fiction game in the form of a video interview with a woman as she tells her story.
SHARE
Facebook
F
Twitter
T
Google
G
Pinterest
P
COMMENTS
Spread the love

Upon booting the game, I am greeted by a computer desktop and the flickering lines that quickly set the time for this story. A quick read of two files on the desktop, aptly named ReadMe.txt and Really_ReadMe.txt briefs me on the short yet intriguing backstory: here is a database of archived footage from a series of interviews between a young lady and the Police.

The core gameplay loop is simple: You enter a search keyword into the box and then the database will filter a series of these snippets, showing only the first five videos that relate to a search; if there are more than five videos that relate to the search, you may have to add additional words to narrow the search. The clips themselves can last anywhere from seven seconds to several minutes and nearly always contain extra keywords that you can use as search parameters if you read between the lines of the Woman’s speech. As the videos appear, they aren’t in any specific order and will be chronologically uncoordinated. This means that while you are looking to uncover all the files, you will also have to deal with piecing a timeline together that explains the disappearance and murder of a young man.

Overall the game looks quite charming, really capitalising on the almost nostalgic feel of 90’s technology that many people have, especially gamers. I think the greatest appeal of the game is the main character, actress Viva Seifert. The way that she portrays the wife of the deceased can only be described as fascinating. I was left wide-mouthed in pure confusion by some of the clips as they completely flipped the theory that I had for the timeline up to this point. Another slight motion of hers in one video, led to me searching for secret codes online, which after the name of the code I was looking for, revealed another video where she discusses exactly that. Each new discovery left me with more questions that dropped me further down the rabbit hole.

Viewers would be advised to sit with a notepad ready to scrawl down notes as they progress, as the theories that I developed while progressing through the archives made little sense after a shocking discovery in the next clip I found.  I would say that the main issue with the game lies in the fact that if you don’t enjoy playing the detective and watch a lot of videos, or if you wanted a lot of gameplay mechanics, then maybe look towards another title in a different genre. However, if you were looking for a relaxed, simplistic game that can leave you thinking about what is truth and what is a lie, then definitely pick this game up.

About James Grant
Hey everyone! I'm James, a writer and the Overwatch Team Captain for WGN! I've been a big gaming nerd since the age of three, growing up on the likes of Sonic, Pokemon, Tekken, and the like. When I'm not gaming on any device I can get my hands on, I'm working my way through a Computer Science degree and would love to develop a game someday. Do you want to suggest a game for me to review? Tweet me with a game and I'll try my best to play it.
View All Posts by Author
Rockape plays SOS
Big Day for Welsh Game Development