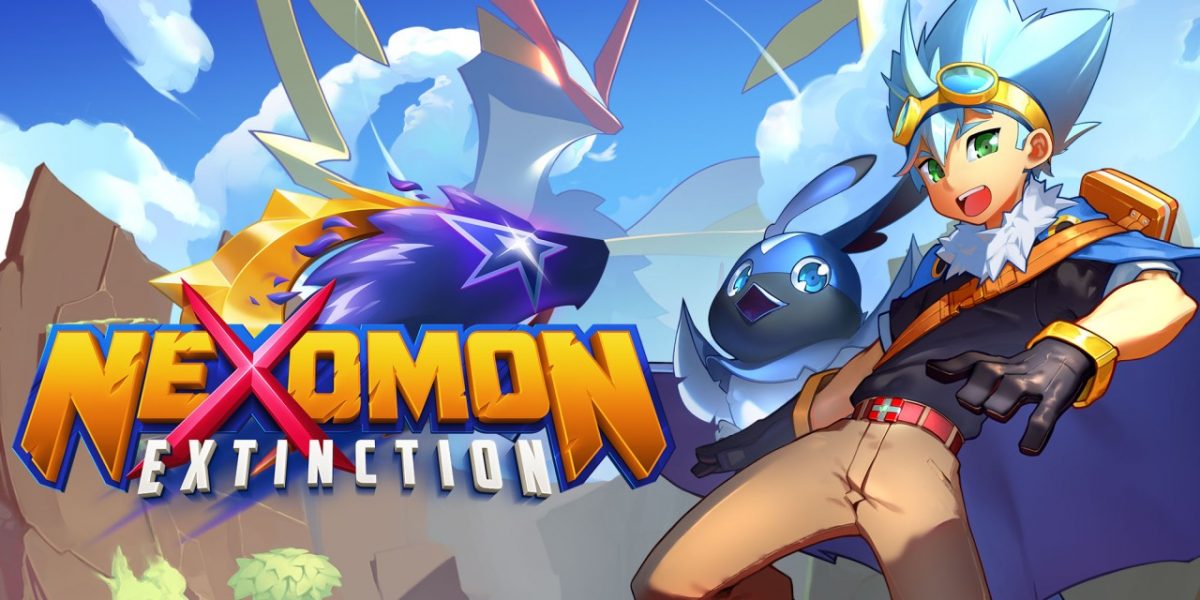 Nexomon: Extinction takes the Pokemon formula and puts a back-to-basics spin on it. How well does it work? Check out our review to find out.
SHARE
Facebook
F
Twitter
T
Google
G
Pinterest
P
COMMENTS
Spread the love

This is a review of Nexomon: Extinction by developer VEWO Interactive released on 28th August through Nintendo eShop. The game has also been released on Steam and PS4. This review is based on the Switch version of the game. A code was provided to the Welsh Gaming Network for the purposes of this review.

I’m relatively sure we’re not far off “Pokemon-like” becoming a genre. Not as a primary genre, but as one of those niche sub-genres that we use as short-hand for similar games – like walking simulator, roguelike, or Metroidvania. Nexomon: Extinction is the latest in a recent run of adorable collect-a-thons like Ooblets and TemTem, that draw from Pokemon’s roots and puts their own spin on it. And honestly? I’m all for it. These fresh takes on a genre I’d loved for years – without the library of nearly 900 critters that weigh down King Pocket Monster – are great fun.

What is Nexomon: Extinction?

Nexomon: Extinction is a return to classic monster catching games, complete with a brand new story, eccentric characters and over 300 unique Nexomon to trap and tame. The world is on the brink of extinction as mighty Tyrant Nexomon fight for dominion over humans and monsters. Join the Tamer’s guild and begin an epic journey to restore balance before all hope is lost…

It’s really difficult not to compare Nexomon to Pokemon. The titan of taming has taken up significant space in my brain. It speaks volumes, then, that Nexomon made me feel that happy nostalgia for trapping new ‘mons, which usually only Pokemon manages. There’s a lot of really good stuff emulating what makes Pokemon great. Character designs are lovely – many of them wouldn’t look out of place in the Pokemon World. The overworld and character sprites are vibrant, and NPC characters have wonderful, quirky charm. 300-ish Nexomon is a surmountable number, too. With only one version of the game – and no trading – you should be able to collect them all. Big tick from me.

It’s also a sped-up twist on the formula – battles are quicker, and the story clips along pretty rapidly. You get given your first Nexomon much faster than you might expect, making a refreshing change from what sometimes feels like death-by-tutorial in other games. The compact world helps with the pace too. The walks between towns never take long, and you unlock a fast-travel mechanic relatively early on which saves even more time.

The writing as – it rushes along – is very fun. It’s self-aware, meta, and quite happy to poke fun at itself and genre tropes alike. While a bit more mature than you might expect, it balances nicely with humour, especially Coco, who is a great comedy side-kick to your mute central character. The music is just serviceable. When you play handheld on Switch, it makes do, but when you play on TV, it doesn’t sound great. Given the multiplatform release, it seems a bit of an oversight – although sound effects are generally much better.

The core game of battling creatures, whittling down HP, and capturing them in magical devices should seem oh-so-familiar. It’s an area of heavy tweaking, too. Your creature has a selection of moves to fight with, which use up Stamina. Stamina works very similarly to mana/MP gauges in other RPGs, as opposed to each attack having limited uses like in Pokemon. Stamina is a pretty scarce resource. I found it really easy to burn through the whole bar with 5-6 attacks. It means frequently swapping your main ‘mon, and leads to your team levelling together in an even fashion.

You need a balanced team, too. Damage bonuses and defences are less pronounced. Picking the right elemental type means you only do slightly more damage, and only take slightly less from oncoming attacks. It means picking the right element is less effective than you might be used to. As a result, battles are more closely fought, which means this – and Stamina – lead to more trips to recovery. Luckily, there’s plenty of medics and healing is just a flash on the screen!

Capturing critters is also a bit more in-depth, with feeding, trap type, and even a quick-time event contributing to capture success. I liked being shown the capture probability and how the various elements fed into it… But the quick-time event felt out of place. It’s a bit of a blunt way of trying to increase difficulty – and to be honest, it just makes the game less accessible without actually adding anything. I could do without it.

Above all of this though, the biggest factor increasing difficulty is dynamic level scaling. You will encounter creatures close to – or even above – your level, no matter where you are in the world, with the scaling tied to story progression. On the surface of it, this makes sense. No more catching under-levelled companions, or grinding out levels against weak critters for minimal XP in the same old areas. But the early implementation was one ratchet of difficulty too far. You were consistently out-levelled, and with grinding already slower because of the Stamina and health issues above… It didn’t feel like you were progressing. Grind is fine – and expected – but when you need to recover every 2-3 battles, it was a bit much.

Thankfully, an update was released last week that adjusted the scaling. It now feels much less extreme and doesn’t push the difficulty too far when the other mechanics are taken into account. I’m enjoying myself a lot more, and the game is still challenging. It just seems more balanced. There are still some small bugs here and there – animation glitches, mostly. Nothing major that spoilt my enjoyment.

Anyone who’s played the Pokemon series regularly will be aware that there’s some serious feature bloat in the newer games. Years of additional bits – not to mention the huge catalogue of Pokemon – can make your head spin. Nexomon does without all of this – EVs/IVs, breeding, HMs… Even stripping out popular features like multiplayer battling and trading. It’s a purer form of the tamer-battler, distilled down to the core. Like an exceptionally polished version of the Gen 1 games, honed and primed for speed and slickness. The lack of multiplayer might mean less longevity, but I actually feel it has a cleaner focus this way. Not all games have to be games-as-a-service.

So does Nexomon do enough to differentiate itself from Pokemon? Not completely. By leaning so hard on its inspiration, Nexomon has ensured that the comparisons will always be made. But it also seems to be gunning for a different audience – maybe slightly older, maybe looking for more of a challenge… Maybe wanting to finish a collection without needing to find people to trade with, or trading up, down, left, right across multiple platforms, media and titles.

It’s a tough one. Nexomon isn’t powered by nostalgia in the same way Pokemon can be. But I’ve really loved my time with it. The hyper-distilled, challenging gameplay made me realise that this is what I’ve wanted from a tamer-battler all along… Just catching things, battling things, and a checklist that I could realistically complete. How funny that this indie David has given me what the Pokemon Goliath hasn’t for many years. I’m off to buy more traps.

About SoupaBuoy
Rhys (SoupaBuoy) is a Cardiff-born creative and avid gamer. He is currently a Walkthrough Overseer at TrueAchievements, having previously been a member of their YouTube team too. He's recently branched out into streaming and loves platformers, puzzle games and RPGs.
View All Posts by Author
Visit Author Website
Gamescom 2020 – ASH “Demo Booth”
Opinion: The console wars are over