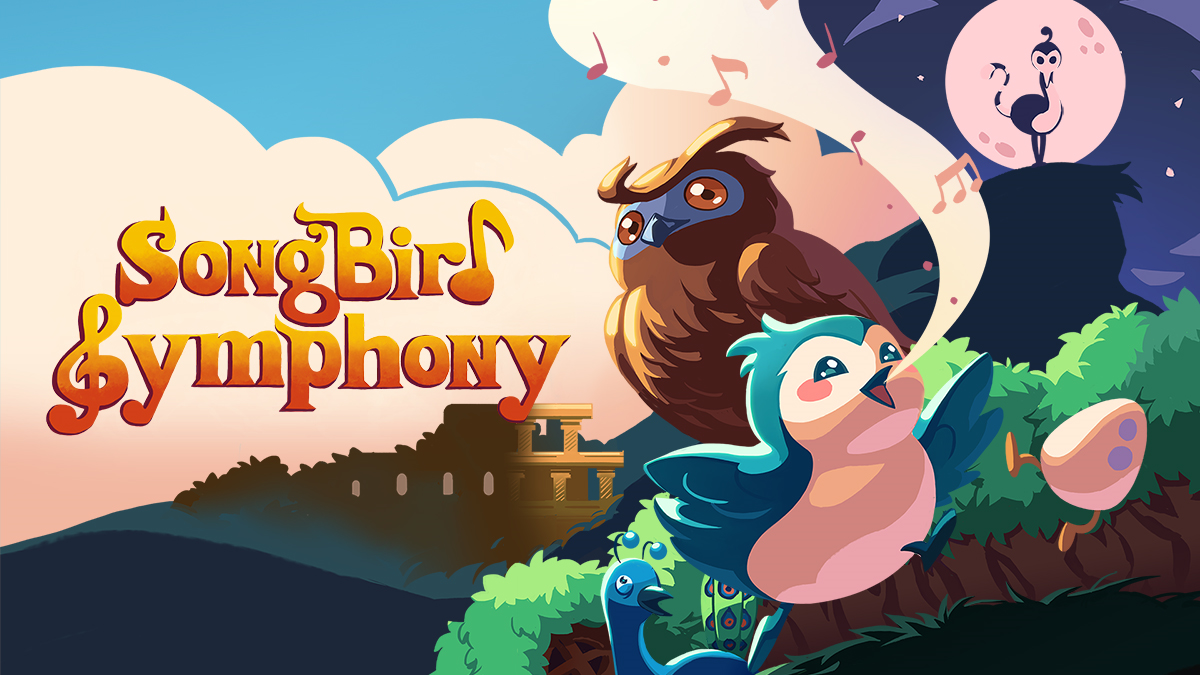 If I had to choose one word to describe Songbird Symphony (Joystick Studios, released 25th July 2019 on Switch, Steam and PS4) it would be charming. The main character is charming, the world is charming and the plot is charming. To put this into context, you play as Birb, a small orphaned chick who has been adopted by a peacock named Pea (see where they are going with the naming conventions here?), Birb soon realises he is not like the other peacocks and so sets out on a grand adventure to find out his real parents.

The Welsh Gaming Network were provided a review key for Songbird Symphony on Nintendo Switch.

Songbird Symphony boasts lush backgrounds and a definitive pixel art style. Levels are laid out in the same style of the classic metroidvania games in which it’s a platformer but you must backtrack on yourself while solving puzzles throughout. These puzzles are certain events that can be completed during the level, such as leading a hive of bees to their queen, which in turn makes them pollinate the flowers in the background turning them into a brass section, which then gets added to the soundtrack. There are typically 4 puzzles that can be solved each level that add extra layers to the background music and each completion of one adds a musical note to your total, which can be used later on in the game to unlock a door if you collect them all.

You start the game with one note, situated on the up button on the Switch Dpad. Pea will instruct you on using this note in a rhythm style game in which you must mimic his timing to the metronome. Each world has one of these song events and each one is different to the last, this one being simply to mimic what you see in time to the music. As you progress through the game you earn more notes up to 6 and the song “battles” become increasingly complicated. Throughout the songs there will be sung verses which is a little jarring as it simply puts up lyrics on the screen and an icon bounces along much like an old-school karaoke machine so you must wait for that section to end before being thrown back into the rhythm game.

Birbs abilities are limited to jumping, gliding, swimming, pushing and singing. Certain platforms and doors need a specific note input to be moved or opened, so you might find a door to a certain collectable unreachable till you come back after gaining the right note either at the end of the level or from one in the future. You gain a companion named Egbert and must use short note inputs to make him either stay or follow. This is used for button puzzles where you need to be standing on more than one at once to activate a puzzle.

Songbird Symphony is not without its drawbacks. Being a puzzle platformer with backtracking and plenty of different areas and paths to explore in each level, a minimap is seriously lacking and you can get lost quite easily, especially as there is one save point in each level that must be manually used. I had unfortunately experience a crash of the game and lost a few minutes of progress due to this and then when I got back to it, found myself unable to find the path I had taken due to a lack of minimap.

In conclusion, Songbird Symphony is fun and surprisingly challenging! The difficulty ramps up fairly quickly with each addition of a note, especially as it takes a few tries to get used to the new one popping up during the song battles. The games visual charm and story sucks you in quickly, the soundtrack while a little basic, is interesting in the way the levels evolve to add more instruments and tracks and besides some problems getting lost due to lack of a map of any kind, I would definitely recommend this game on the Switch!

About Kingstone
Avid Welsh gamer hailing from the distant 90's! Grew up with every nintendo console since the super nintendo. Loves a good RPG or retro sidescroller. Known to also play the occasional game of Overwatch. Hoping to lend his opinion on various games and hardware as they become available!
View All Posts by Author
Super Smash Bros: A Case for Doubles – Parts 1 and 2
Super Smash Bros: A Case for Doubles – Part’s 3 and 4