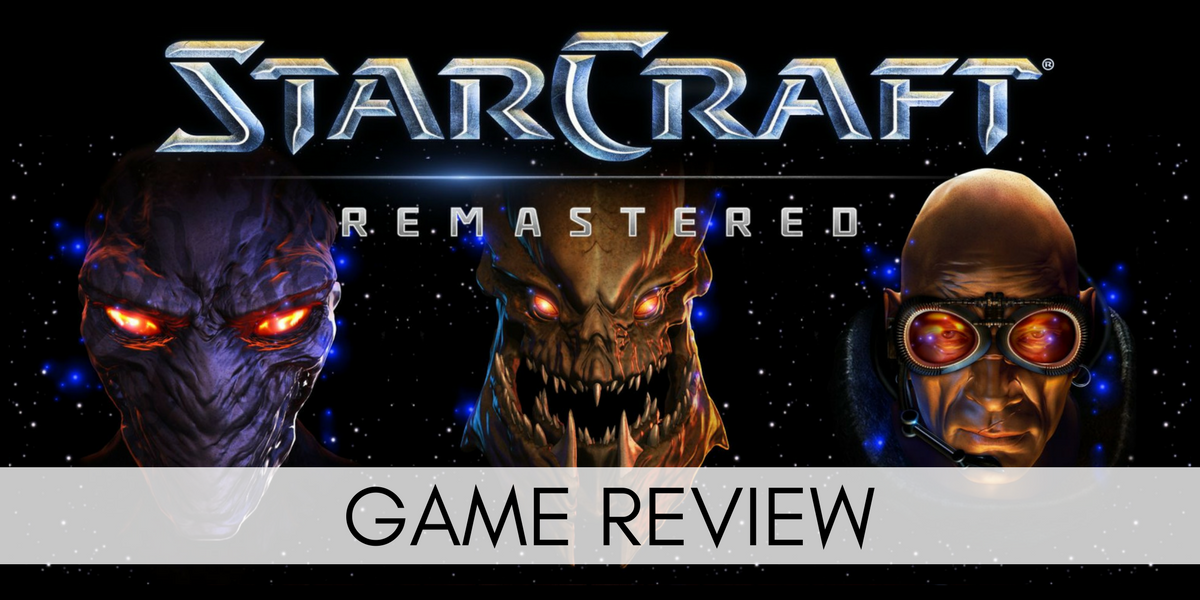 What’s it all about:

As the name may suggest, StarCraft: Remastered is the remaster of one of the most well-known and influential real-time strategy games that can be partially attributed to the success of E-Sports both in the country of South Korea and around the world.  StarCraft was originally released in 1998 and was met with great reception, even going as far as to be described as “the best real-time strategy game ever made” by numerous games media. StarCraft: Remastered hoped to recreate that original success and re-invigorate the StarCraft E-Sports scene with fresh blood.

So, where to start?

Well, the remastered package comes with the complete first game along with the equally large expansion pack. In total, there are 6 Campaigns set along 3 races, The Human Terrans, The insect-like Zerg, and the mysterious Protoss. The core of the single-player game consists of creating buildings, making workers to fuel an economy and then producing military units to conquer the land and fulfill the objectives. The campaign is a great place to start, where each new mission introduces new units and structures while following a space drama between the three races over a total of 58 unique missions.

The real meat of Starcraft: Remastered, however, lies in the multiplayer. The competitive scene of Blizzards game has been a shining example of how a community can keep a game alive well after the developers have moved on to newer projects. Even after a sequel, the game remains as popular as ever, with numbers staying strong even after 20 years. The new remaster adds some new infrastructure to the online system, mainly by introducing a laddering system that tethers to your battle.net account. It also adds support for cloud saves and custom game modes created by the users in a single interface. Overall it feels like a great refresh to the system that makes it even easier for a new person to get started with the ladder. However, the game is still as notorious for its incredible skill curve and deep combat system as it always was. The 3 races have mechanical differences that result in several different playstyles and builds that shift and change as the metagame alters. The age of the game means that many of the builds have been predefined and the units have been scrutinized in such detail that there is a wealth of knowledge to absorb. This does, however, mean that there is are many people who have played and reviewed the game for many years.

Regarding owners of the original game who are playing on the servers, they can still play and get the patch that connects their accounts to the game and can play online, but they will miss out on some of the new features that Starcraft: Remastered offers. The main features are the new 16×9 aspect ratio, high scale resolutions up to 4K and new high-quality sprites and audio files.

The other main thing to note is that with the release of the Starcraft: Remastered, the original game has been released for free. So, this raises a strong point, why bother picking the game at cost? I think that in this, quite unique case, I recommend playing the first few missions of the older version and then purchasing the remaster if it is something you enjoy if you can get past the older textures of the free game.

About James Grant
Hey everyone! I'm James, a writer and the Overwatch Team Captain for WGN! I've been a big gaming nerd since the age of three, growing up on the likes of Sonic, Pokemon, Tekken, and the like. When I'm not gaming on any device I can get my hands on, I'm working my way through a Computer Science degree and would love to develop a game someday. Do you want to suggest a game for me to review? Tweet me with a game and I'll try my best to play it.
View All Posts by Author
Celtic Games Show 2017
Zombie Solitaire 2 Chapter 2