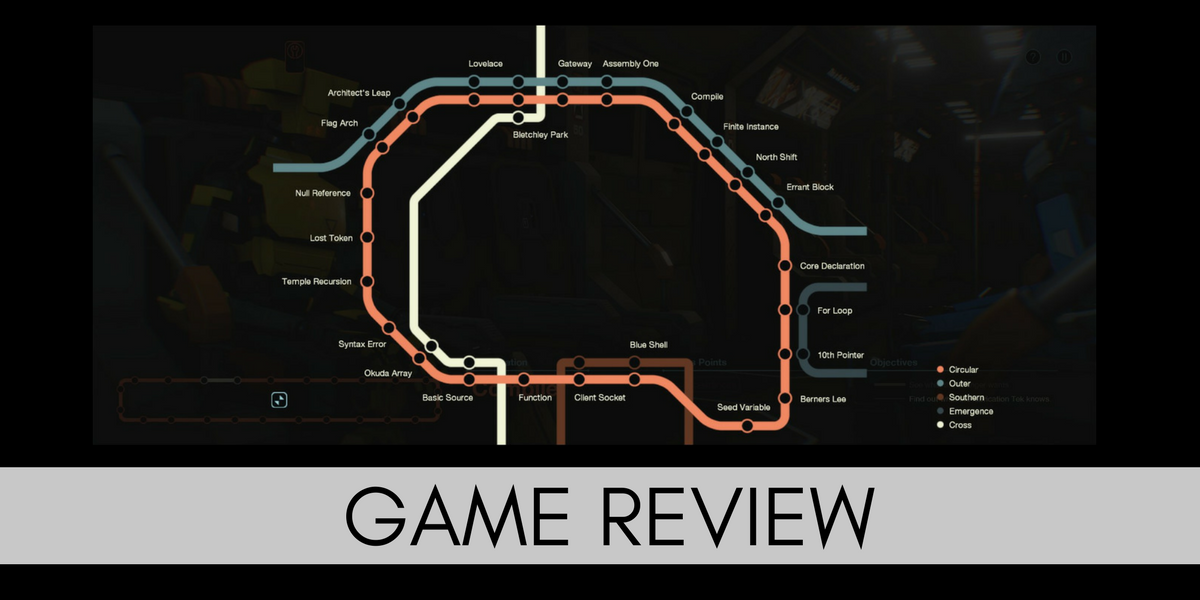 This visual novel adventure takes you into the future where an Android Detective has to solve a mysterious dilemma that could have far-reaching consequences.
SHARE
Facebook
F
Twitter
T
Google
G
Pinterest
P
COMMENTS
Spread the love

When the truth is buried, go underground. Step into this new take on text-based adventure from the award-winning team behind Thomas Was Alone and Volume. A short story that hands you the fate of the world above, as a detective looking for answers on the Subsurface Circular.

Purchase Subsurface Circular by Bithell Studios on Steam. It was released on 17th August 2017 and at full price is £4.79. You can follow the game on Twitter.

Subsurface Circular is a short (approximately 90 minutes) visual novel from the maker of Thomas Was Alone and Volume. We play a detective Tek – a robot of the highest intelligence levels. In this universe, robots have been “freed” from ownership, yet still work for the human “management” and seem for all useful purposes, slaves, as they are assigned tasks which they must complete and reset when they’re needed for a different purpose. In the beginning of the game we meet a Tek who talks about his missing friend, and we decide that despite not being given the case by management, we are going to work on the disappearance of Teks and solve this crime.

It’s a neat sci-fi story that really makes you think about the rise of AI and robot sentience, about job replacement and how humanity would feel in this – potentially not that crazily distant – future. Whilst of course, we have no real reality of sentient AI, machinery causing human discontent by replacing certain jobs is certainly a relevant topic and only going to become more so. It was well written, thoughtful and logical with a few small puzzles to make it a little more than just reading. The atmosphere is perfect, from the music to the sound effects, from the graphics to the font and even the way the text pops up and you ask questions. The entire artistic aesthetic really felt authentic to me and allowed me to immerse myself and empathise completely with the robots I was talking – something that’s really important to take any genuine emotional impact from the ending.

There are no details I can give without being spoilery – and I would strongly recommend you don’t try to get more information as with such a short game, even a small spoiler will detract from the enjoyment and surprise. You’ll just have to trust me that the story develops in a satisfying way! In fact, the developer specifically requests in the game that Streamers and YouTubers don’t share past the third sequence. Obviously many people will ignore this, but I’ve chosen not to upload any screenshots past the first three sections as requested, and none of my screenshots contain dialogue that have story-relevant spoilers.

Gameplay wise there’s not much as this is a visual novel – it is purely clicking the dialogue you want. There is an option at the ending, but this is the only relevant option in the game. The rest will be experienced the same by everyone. If you want to feel like you make an impact or have choices, this is not the game for you. But if you want to be engaged in a story that makes you think, set in a medium that really feels atmospheric then I highly recommend it. I did like the fact that you can set your reading speed as reading faster than the dialogue pops up is very frustrating for a speedy reader.

And it’s a short story.

The game is short, there is no beating around the bush but if like me, you read the store description, then you’ll know that going in. The developer makes it clear you can complete the game in under 2 hours and as he mentions, this technically means you can complete it and get a refund. If you’re planning on completing it and then refunding it, just take a moment to think about how much work goes into making a good game like this – and how honest and upfront the developer was about the playtime. I do think that even at 90 minutes, this game offers excellent entertainment for $5, but I’m also an avid reader, and have no problem paying $5 every week for a new book.

The game was almost flawless; but I did feel a bit disappointed about the ending. Not the way the game ended itself, but I felt the last sequence or two felt rushed and as if a chunk was missing from the story. We took a big leap at a critical point and then the ending was there. I would have loved if this game had different options and endings, or if there had been a few more sequences as it didn’t quite feel perfect. Considering this is such a small indie development; perhaps budgetary constraints were at work. Maybe I’m just greedy, but I’d have happily paid double to experience more of this world.

This game definitely won’t be for everyone. I would recommend it especially to those who enjoy reading books or with a particular interest in the philosophy of future AI, especially if you’ve read any Asimov (who is quite heavily referenced in the game).

Despite that, it is still an excellent game and one of the best visual novels I’ve played, so it gets a massive thumbs up from me and a solid 9 / 10 score.

About Athravan
Athravan - Christy - joined the WGN in February 2016. A keen writer and reviewer, she is currently the Editor of the Welsh Gaming Network. She lives in Cardiff with her husband and son, who was born in 2017. You can follow her Steam Curator "Play with Ath" by clicking the website link below.
View All Posts by Author
Visit Author Website
Sonic Mania!
The Wolfs Bite