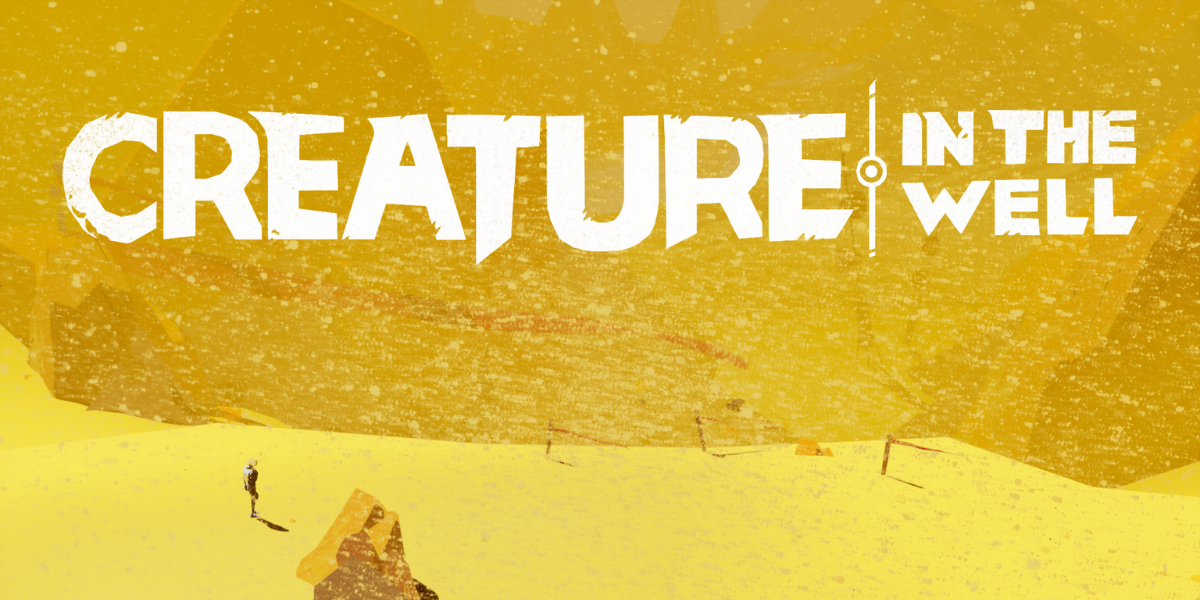 Review: The Creature in the Well

“Shh. It’s standing outside the house,” the voices whisper as I walk through the dilapidated town of Mirage, a mix of rusted machinery and shack-like houses, ravaged by the constant sandstorm that rages outside. My health bar is flashing red, I’ve just been beaten and tossed outside by the creature that lives in the well. The endless sandstorm was anticipated and a giant weather machine was being built to save it, but something happened – this titular creature.

I’m a Bot-C android known as an Engineer. My purpose was to keep the machine working, but somehow it seems like I’m the only one left. The machine is powered down and I’m alone, without instruction, being taunted and threatened by a giant, menacing creature whose dark home the machine was built in. I set about restoring the machine whilst he does his best to stop me. With my trusty baseball bat and a sword, I head inside to… play pinball?

As the Engineer, you must hit balls at pads – more Breakout style than pinball, moving through obstacles, avoiding danger, hitting combos and completing basic logic puzzles or tests of speed, positioning and angle to accrue energy. This energy can be used to unlock doors or power up essential machinery as you progress through the machine, unlock secrets, collect goodies such as weapons which do different things, access lore tidbits and hopefully, power the thing up so I can find out what the hell happened here and hopefully be the best Engineer one can be.

The Creature in the Well can be completed in several different orders and some rooms can be skipped whilst others are required. If you miss something there is a small amount of backtracking and I do think that the exploration qualifies this as a metroidvania, although a fairly light one. As you unlock weapons and equipment your gameplay does change and you are presented with choices as to which you personally prefer.

The art is absolutely amazing – I love it. Pops of colour are everywhere, contrasting with hard shading leading to a genuine atmosphere. The well itself is a dark void that you stare into, the creatures glowing eyes and grasping hands menacing. The characters you meet along the journey are interesting and unique, strange creatures and machines that I’d love to get to know more. The dialogue is well written throughout. Exploration is fun and not forced. The story is intriguing.

Overall The Creature in the Well feels very original and something that stands apart from others.

The pinball “combat” aspect is a little bit hit and miss (literally and figuratively). Sometimes things feel waaaaay harder than they should be. Some rooms can be quite tedious. Maybe I’m just bad at it, but I can usually recognize my own flaws. The gameplay just didn’t quite feel right and ultimately it ended up a bit repetitive and the later challenges seemed more frustrating than satisfying. In spite of this it was a good journey as I explored, swung, thwacked and dodged my way to the end.

The entire game took me about 8 hours to complete, and that includes a lot of double attempts and more swearing at one section than I would on a Dark Souls boss, but I did skip some sections and didn’t unlock all the secrets.

Despite the gameplay being a bit frustrating at times, the art, presentation and story were absolutely spot on. This unique blend of pinball metroidvania action adventure adds a breath of fresh air to the 2019 gaming line up. It wasn’t perfect, but very enjoyable.

The Creature in the Well released on 6th September 2019 and is available to buy on Steam at price of $14.99 / £11.39, is available on Xbox One (included in Games Pass for PC or Xbox as well) or can be purchased for Nintendo Switch. This review was conducted on PC using keyboard and mouse via the Xbox Games Pass.

About Athravan
Athravan - Christy - joined the WGN in February 2016. A keen writer and reviewer, she is currently the Editor of the Welsh Gaming Network. She lives in Cardiff with her husband and son, who was born in 2017. You can follow her Steam Curator "Play with Ath" by clicking the website link below.
View All Posts by Author
Visit Author Website
Frameworks – The Cameras of Video Games
Review: The Kamikaze Pro PC Gaming Case
COMMENTS 4