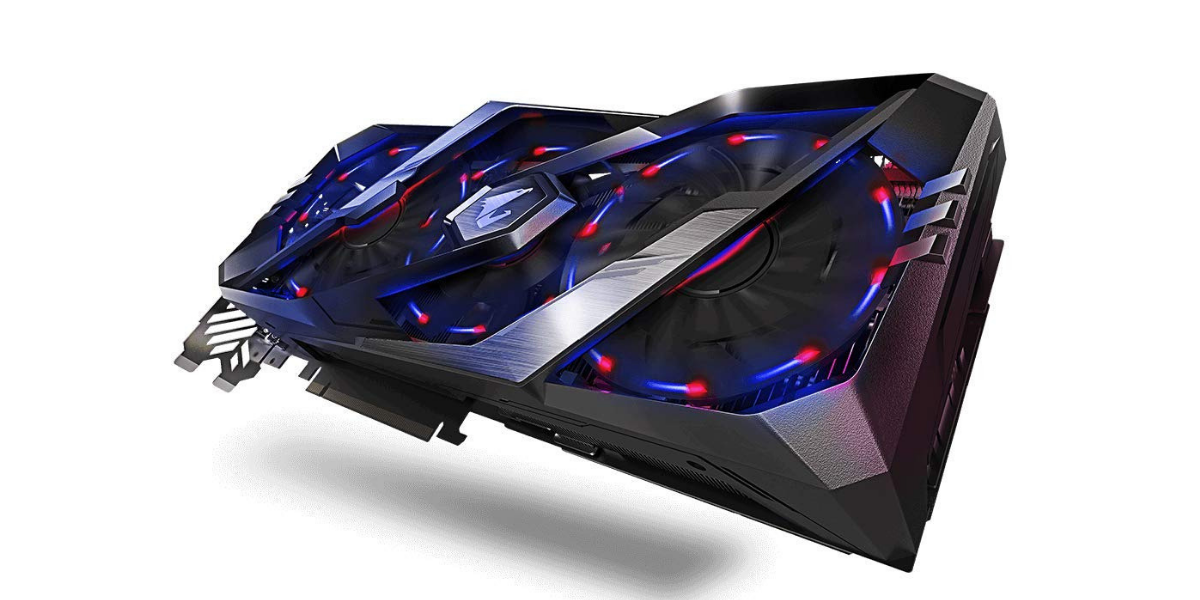 NVIDIA’s new GPU line is the RTX series. The one the caught my attention the most is the RTX 2070 Aorus Xtreme. It features a premium feel to it with a redesigned cooling system and a metal backplate. The 2070 Aorus Xtreme comes overclocked straight out of the box. It is also compatible with RGB fusion which allows you to change the LEDs on the fans and the Aorus logo on the backplate!

Appearance of the GPU

The Aorus RTX 2070 GPU Xtreme is very similar to their 2080 version. The GPU’s cooler design has been reinvented and improved vastly compared to the previous graphics cards that have been produced, featuring three 100mm fans with the middle one turning the opposite way to get rid of the heat quicker.

This GPU is jam packed with RGB goodness for those that love to add a bit of colour to their build. It has RGB lights on the tips of the fans which creates a new look, whilst the Aorus logo lights up on the side and back-plate.

The 2070 Aorus Xtreme also comes with a decently sized heat-sink which allows for efficient and effective cooling while your busy gaming or working. Below you can see a clear picture of the heat-sink.

I have been using the GPU since the day of release in a build with a Ryzen 2700x with 16GB of RAM clocked at 3200MHz (see benchmark below) . I currently have my monitor set to 1920×1080 and it can handle the majority of games very well and epic/ultra at around 60+ FPS. Of course depending on the game you play and the resolution you have it at the FPS may differ.

According to research the GPU can easily stay above 30FPS with the settings maxed out! The moment you upscale the resolution to 1440p you may see a big performance impact on FPS. You will stay above 30FPS but remain under 60FPS. But with a few tweaks here and there you should be able to maintain a stable FPS.  However, you may drop down to 29 frames per second on certain games such as Middle Earth Shadow of War if you go up to 2k resolution. Gaming at 4K is not an option unless you want to play at medium settings which is pointless if you want to experience the best graphics possible.

The Ray Tracing feature that NVIDIA has introduced is only used by one game so far. That game is Battlefield 5. While this may please many people who own an RTX compatible card, it comes with major FPS drops. For example in Battlefield 5 at 1440p you will struggle to stay above 30FPS. This puts you at a big disadvantage while playing as you will be getting stutters and possible screen tearing, which of course no one wants! If you want to use Ray Tracing at its current state you should get an RTX 2080/TI card instead of a 2070.

After running Time Spy at 1080P the highest temperature I’ve seen was 62 degrees C, whilst the power consumed while performing this benchmark was a total of 203.4 Watts. This gives you plenty of room to overclock even though you can only overclock as much as NVIDIA have limited the 2070 cards. Below is an image of my GPU score on Time Spy. I have used a Ryzen 2700x with 16GB of RAM clocked at 3200MHz.

Everyone is always asking the question “Is it loud?”. The answer is yes and no. If you put minimal load on the GPU the fans will remain off until it reaches a certain temperature, although you can configure it in the Aorus Engine software. Even at stock fan curve, the sound levels from this card are small but when they reach 70% then it is easily heard and can become annoying if you have your microphone near the PC. Regardless of the sound, the majority of people will be wearing headphones of some sort which provide noise cancellation.

In my opinion, it is a great entry card to the new RTX series cards that NVIDIA have produced. This card costs around £614 in UK on Amazon.

Each card is produced well and fits neatly into the system you are planning to use. When you buy the Xtreme variation you get a GPU support bracket to combat that GPU sag. The PCIe slot then has a longer lifespan due to the elimination of GPU sag. I rate this card 10 out of 10 and would definitely upgrade to the 2080 or 2080ti if I had a chance to. Plus it comes with Addressable RGB which is on the fans, side and the top which can be controlled and synced with the rest of your Aorus hardware with RGB fusion.

Disclaimer: If you have a 20 series GPU, check what memory modules you are using. If it is micron contact the retailer and see if you can exchange it for one that has Samsung memory. You can use gpu-z to check what hardware you have

About Staritegaming
Hello! I have been gaming since I was 10. I have built 4 PC's and recently got into VR! my current PC specs are Ryzen 2700X, MSI RTX 2070 Gaming Z, 16GB Aorus RAM at 320MHZ, Aorus x470 Motherboard with a 750 PSU. Of course, everything is RGB!
View All Posts by Author
Book Review – Retro Tech
Xbox Game Pass is coming to Belong!