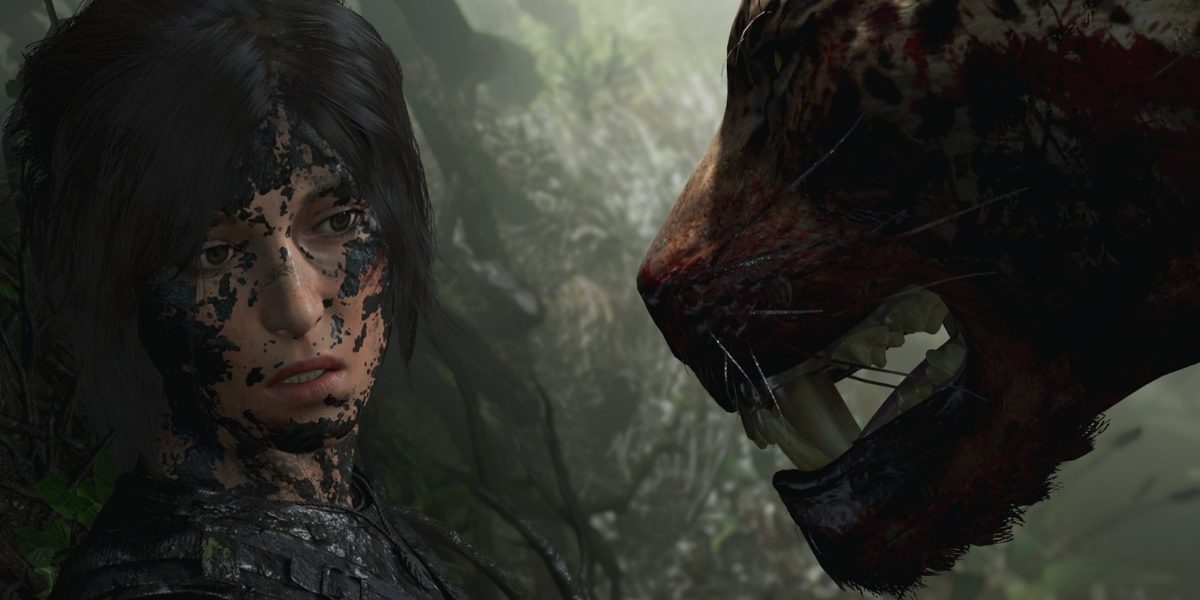 Shadow of the Tomb Raider Review – Lara’s Dark Side

Following adventures on the island of Yamatai in Tomb Raider as well as Syria/Siberia in Rise of the Tomb Raider, Shadow of the Tomb Raider marks the last in a trilogy of origin stories for Lara Croft. It’s been a stunning 5 year journey which has seen the establishment of unique mechanics to the franchise and glorious visuals. But most importantly, a very thorough and in-depth look at Lara’s back story and how she morphed into the dual-pistol-wielding behemoth we know and love from the original 1996 title.

An area that the reboot series never has problems with, is definitely the sound and music. In Shadow of the Tomb Raider, there is no exception. Guns sound meaty and have that weight we want from a fire fight, with no real big changes from Rise of the Tomb Raider. The big differences in sound I noticed were the environmental ones in particular. This included the sound of apes up in the jungle trees, to the guttural groans of tribal creatures lurking in the caves. Not only were they excellent but did well to create a constant sense of foreboding. More so than any previous title.

Music was nothing memorable but still consistent. No complaints and very typical again from the previous titles. Plenty of drama and crescendo for the several fights you encounter, including some gorgeous cut scenes you can sit back and enjoy. Where the music has always played to its strength, are the escape sequences, where Lara is forced to run, jump and climb her way over falling debris and through explosions. Like the other sound effects, it adds superb tempo you get from titles like Uncharted.

One huge downside to the sound in general I noticed was in fact the voice acting. I noticed more than a dozen times, Lara Croft’s accent went distinctly American. Not slightly, but full on East Coast. It really threw me off and broke the immersion. Otherwise, top notch but some serious voicing issues.

Utterly superb. Another area the series has done well in. It’s sad that given the lack of variety in environments, it has not been so obvious to the player to see a range of showcases for said graphics. In the previous game, we had a plethora of environments to see how sand reacted in wind, how snow crunched and melted under foot, how mud and water moved in more wooded areas. But with ‘Shadow’, the rain forest setting has to work hard to show off all the nice bells and whistles.

Fortunately, it pulls it off. Mud is even more delicious to sludge through, shamelessly displaying the deformation technology you’ve seen before in snow. The water effects are also gorgeous. I will jump straight into water later in the review, as it plays a huge role in this game. The density and lushness of foliage in the rainforest is also stunning, somehow creating a true sense of depth, without falling foul to a seamless blend of green into the horizon. It’s a feat I really enjoyed and found incredible. The environment just grows tiresome but it never feels like a small area surrounded by cardboard background.

To begin with, there have been some fairly big changes, whilst a lot of things have stayed exactly the same. This goes for camp sites and customisation (with a few UI differences), climbing, shooting, interactions. All very similar. However, the level up system, towns and climbing have seen some serious overhauls or indeed new introductions.

As with the last two titles, we’ve been used to the climbing mechanics or using our axe and grapple, but the implementation of more grappling and climbing maneuvers is impressive. As someone who climbs in their spare time, I thoroughly enjoyed how Lara now has to leap for outcroppings and really yank herself up. The roof grappling and spiked boot sections are particularly fun and precarious, revealing deep chasms below and raising the stakes.

Gun fights, still, in my humble opinion are the worst part about the series. If you’re playing on console, I recommend having a fiddle with the sensitivity options to get a feel. It just feels a bit clunky still but nothing compared to how grim Uncharted’s shooting sections are. Especially some of the tighter and more chaotic sequences which are quite tough even on ‘easy’ mode, thanks to the terrible camera work and controls. As such, it only encourages you to go stealthy where possible, which is awesome.

Falling into the theme of ‘Shadows’ and all things ominous and scary, you can now cover yourself in mud at conveniently placed puddles and hide against vine-ridden walls in set area’s. I loved this addition because, along with the tree sections which allow you to rope-hang enemies, it gives a new dimension to stealth combat. It felt thematically on point and most importantly, fun. That goes too for the scrambling sections. Some of which are tighter than getting through the Bryn Glas tunnels on a Friday afternoon.

Speaking of tight areas, the water areas of this game are enormous and a delight to explore. They’re fully realised sections, rather than pathways to other area’s of the game. With hidden places and precarious amounts of stealth required to avoid piranha and eels. Another lovely addition to the environmental gameplay are the towns. Huge, sprawling places filled with AI that go about their own lives. Here, you can explore at leisure, go shopping to stock up and so on. It’s a nice way to break-up the pace but it feels odd. Perhaps because it’s so new, or maybe because it stops the pacing a bit too much?

The last of bigger changes to gameplay is the skill tree. Or in this case, the skill mosaic-thing. It’s bright green, blue and red which just stands out garishly to the rest of the menus. A lot of the skills are also locked to ‘story’ progression making it seem 50% pointless but it is simple, so no problems with getting confused. This, for me, is the ugliest section of the game. I didn’t enjoy leveling up at all and found it impacted gameplay little.

Naturally, as this is the last in the trilogy, there are plenty of spoilers. Here, the narrative structure is a real treat and takes some pointers from Uncharted 4’s structure. We get the play as young Lara Croft for a a decent portion, traversing a small part of the grounds, before climbing up onto the mansion, crashing in through a balcony and having to solve a few puzzles. It feels VERY Nathan Drake but doesn’t mean it’s not good, because it is. It pulls in the threads of story that have been spun since the first reboot. We learn more about her emotional turmoil and depression. It solidifies, contextualises and puts to reason the choices Lara makes. Not forgetting, of course, she’s still in her early twenties. At that age, I was still bumming around in a 10 year old Clio, working at a cafe and patiently waiting for the queue to die down in Gregg’s so I could smash a Mexican baguette. Which, I’m sad to say, hasn’t been in stock for quite some time. Please do drop a comment or tweet if you know the location of any Mexican baguettes.

I digress. Which is exactly what this story doesn’t do. It keeps you on a tight lead, building up the heart-warming relationship with Jonah, whilst introducing new characters and an antagonist who is unfortunately quite boiler plate in attitude. A run-of-the-mill bad guy who wants to actually save humanity by killing it. But, in this ride, we’re not here to kill the bad guy, we’re hear to kill Lara’s demons. The ones that have been overshadowing her the whole time. And it all pays off. It’s the real strength of this title despite drawbacks. The dialogue is superb and my only gripe will be how it handles the ending. It feels a bit too thin for the last in a trilogy, so maybe it’s not?

Shadow of the Tomb Raider Conclusion – 7/10

To conclude, it’s a magnificent Tomb Raider title which provides better story, gameplay and graphics, but falls down in voicing issues, variety of environments (despite water sections) and a lacklustre leveling system which is persistent throughout. With the oddly limp ending, it nudges this one down to a 7, where Rise of the Tomb Raider would get an 8.

I have yet to play all of the challenge tombs, some of which are locked as DLC, but thus far they are relatively easy. It’s been a downfall in the series where puzzles have not been nearly as difficult as the old 90’s series, but there’s still hope.

Highly recommend if you’re a fan of Tomb Raider and want to complete the origin story. If you’re not big on adventure/puzzle games, give this a clear miss. Obviously.

About JasonGunslinger
A Cardiff dwelling, late twenties gamer living with his partner and two cats. In my spare time I love to go hiking, camping and regularly practice Ninjutsu. Favourite games include The Witcher 3 and Night in the Woods.
View All Posts by Author
Introducing GameMax
Events at Belong, Cardiff October & November