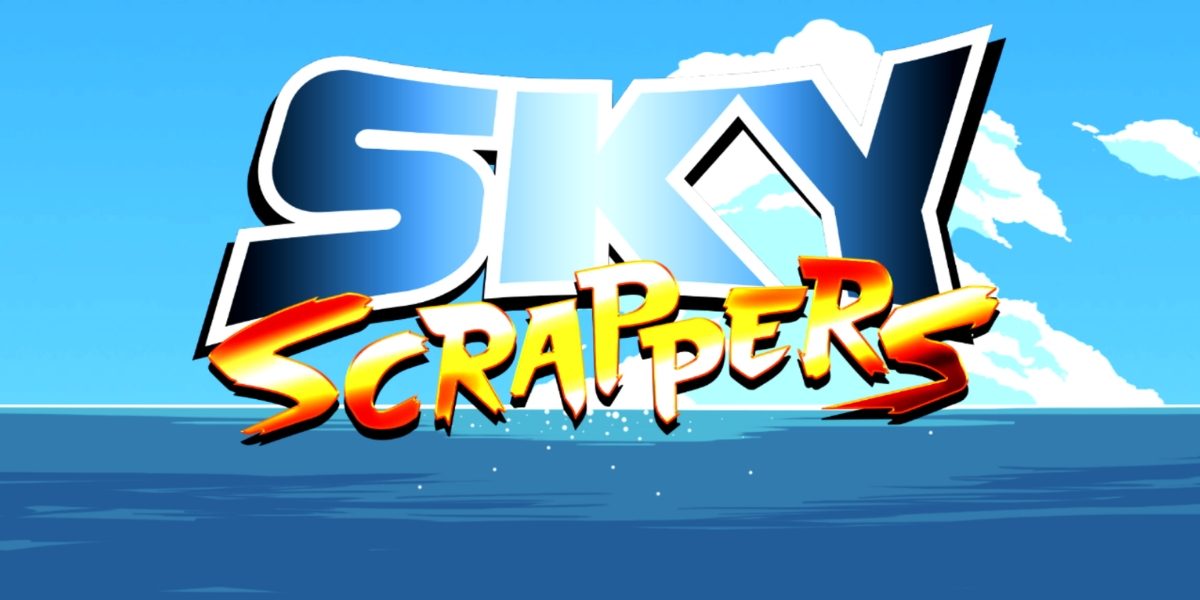 SkyScrappers by Groundshatter (available now on Nintendo Switch, Steam and PS4) is an interesting hybrid of a game. Think something like Ice Climbers combined with DoubleDutch’s Speedrunners with a bit of Smash Bros thrown in. It’s an arcade style game with two primary means of winning, reach the top first, or beat your opponents into submission!

You all start at the bottom of the structure and then depending on the height you set, begin racing to the top while fighting and avoiding obstacles falling down. Each player has a health bar and a special meter which is filled through fighting and can be used to unleash a special attack unique to your character, When your health bar depletes, you are out of the match. Falling also depletes a fraction of your health bar and catapults you upwards, so as long as you have the health resource, falling isn’t an automatic loss.

This gives players an ability to focus on a key aspect of gameplay – do you just gun it for the summit and ignore the other players, or do you hang low and duke it out to win the brawl? When the player number falls to two it can turn into a classic game of tag, where the player in the lead would try to outrun the other while also avoiding falling debris, and the one lagging behind would try to catch up and get a strike in.

SkyScrappers game mechanics feature a double jump which helps tremendously if you don’t quite hit the mark with your initial jump, and a system where the steeper the platform you are jumping from, the higher the jump you are rewarded with, so it pays to be attentive rather than just trying to hop between short platforms.

SkyScrappers artwork is crisp and simplistic, no overly complicated designs of the characters and very reminiscent of old arcade style beat-em-ups but with a drawn feel over pixel graphics. It’s a fast paced game so no real need for anything over the top and fancy.

This game is easy to pick up but hard to master. When I cranked the AI difficulty to max I found myself quickly overwhelmed by the timing and skill of the CPU opponents. And while the climbing and jumping aspect of the game is fun, you seldom make it close to the top, especially in 4 player mode, due to the attacks taking such a large chunk of health off each hit.

The actual combat is also a little lackluster, just one attack button per character and no combos to speak of, just the same hit over and over. You can do a ground pound if you time and attack while landing on a platform and hitting down and you can also hit the debris at your opponent with a well timed attack.

The Nintendo Switch version includes an exclusive mode called ‘vertical mode’ in which the game switches form a landscape orientation to a portrait one. This allows you to see the game in a zoomed out state and see easily what is above and below you, but the character models and more importantly the falling debris will be smaller as well, and you will also be playing this in handheld mode so bear that in mind.

Overall the game would be a great addition to your library of party games you’d have on hand to play with your friends if they came over for some social games, maybe with a few beers involved. As a single player option I could not find myself invested in it.

About Kingstone
Avid Welsh gamer hailing from the distant 90's! Grew up with every nintendo console since the super nintendo. Loves a good RPG or retro sidescroller. Known to also play the occasional game of Overwatch. Hoping to lend his opinion on various games and hardware as they become available!
View All Posts by Author
Wales Interactive announces Maid of Sker
Book Review – Retro Tech