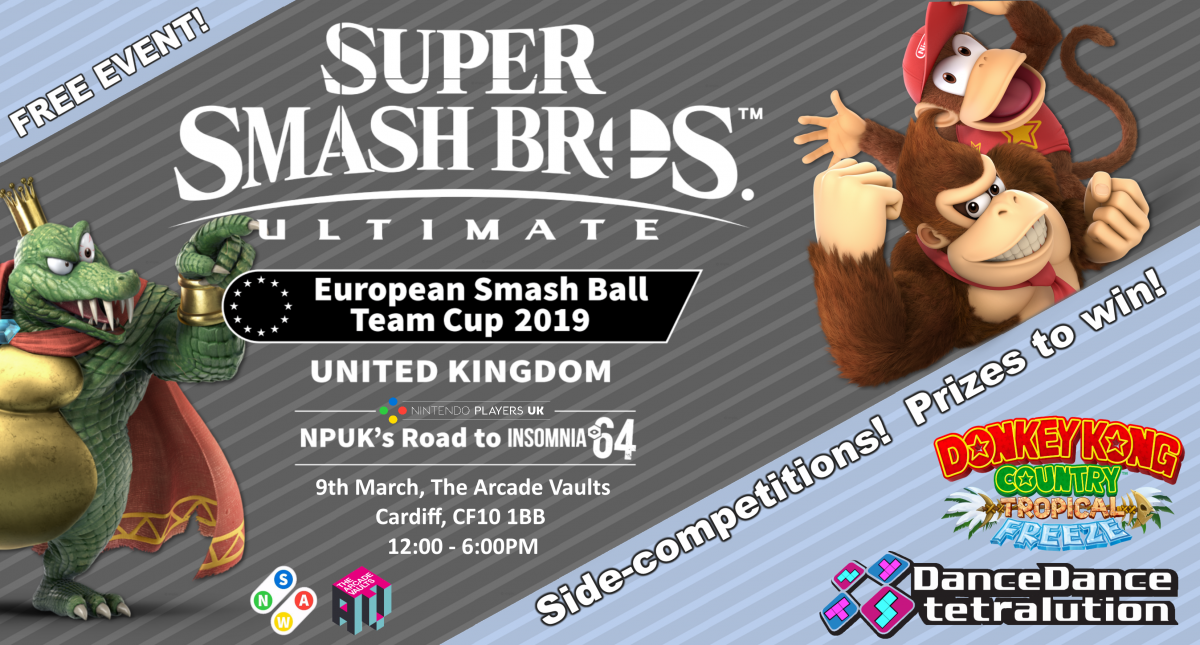 Super Smash Bros. fans! Join us at The Arcade Vaults in Cardiff on 9th March from 12pm for this ‘Nintendo Players UK Road To Insomnia64’ South Wales Qualifier, part of the United Kingdom leg of the European Smash Ball Team Cup 2019.

16 community groups, including Nintendo South Wales, are running regional qualifiers across the UK in the coming months, with the winning teams securing free tickets to Insomnia 64 and a chance to win the final spot in the UK Smash Ball Team Cup 2019 Finals.

The winners of the UK Finals at Insomnia64 progress to the European finals this Spring!

This South Wales Qualifier also features a casual side-comp that we like to call the ‘Gaming Challenge Raffle‘, and lots more to boot. Read on for full details.

I’ll have a full, exhaustive complement of the rules with me on the day, but here are some of the main ones.

Note 2: All 1v1’s are played in a row in Smashdown mode

Bonus: Competing earns you a chance to win a Petey Piranha Plush in our random prize draw.

We’ll likely have a Nintendo Switch and some retro systems setup for players to relax and play. You are of course welcome to bring your own portable Nintendo systems as well.

Arcade Vaults: The NSW Smash event on the 2nd floor is 100% free. For access to two floors of video game history, there’ll be a small fee:

Those who are a part of our optional membership scheme, be sure to bring your Nintendo ID Cards with you. Get them scanned and you’ll be entered in to an exclusive prize draw to win. Prizes to be announced at a later date