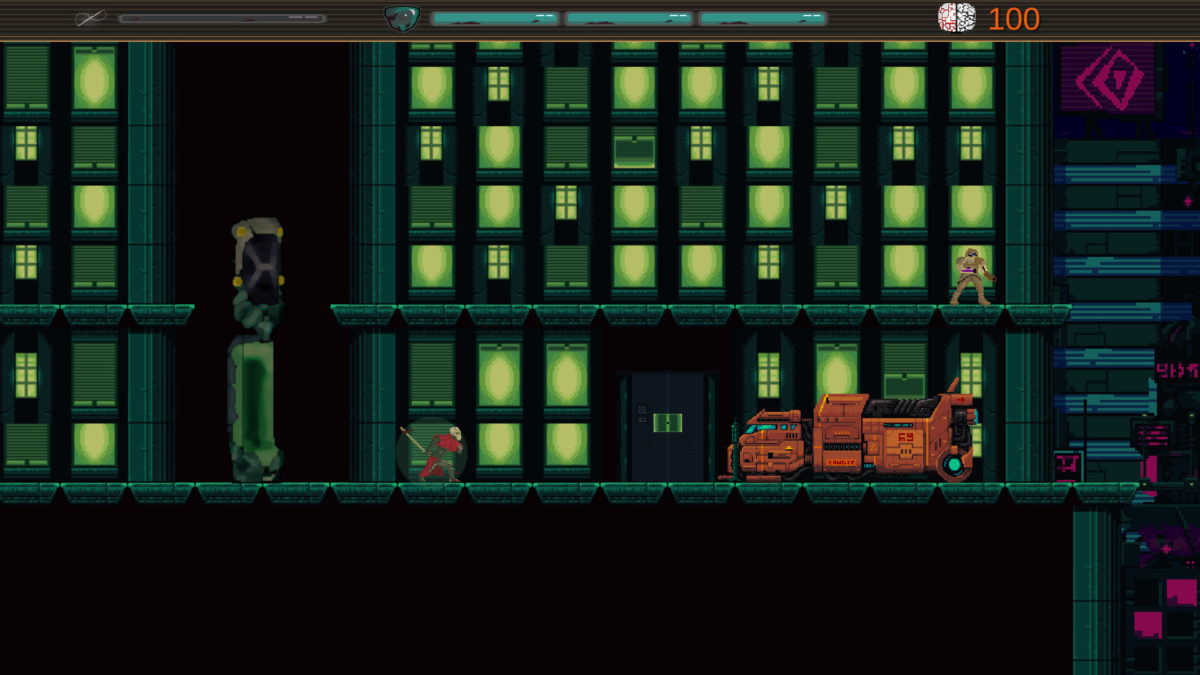 Synthetic Blood: Mind Shift by developer 5th Floor Gaming Dev is out on 26th February on Steam. The developer provided the Welsh Gaming Network with a review key for the purposes of this article.

The best thing about this game is the trailer

The first trailer for Synthetic Blood reminded me of Strider, the classic Mega Drive game. Swords, platforming and a futuristic, dystopic setting.

Yes. Right up my street.

Unfortunately, the promise on paper is let down by a lack of quality in all areas.

What is Synthetic Blood: Mind Shift?

Synthetic Blood: Mind Shift is a futuristic action-platformer with a deep storyline and fascinating binding of mechanics of death and dialogs. Dynamic combat system, interesting characters and 10 different endings will not leave you cold.

Writing on the wall

The warning signs start early. The writing is poor – on Steam, and in-game. Initially, I was inclined to let this go as it has clearly been translated into English. However, the dialogue is filled with exposition and you really need to be able to make sense of it to keep up. I gave up on the story after the third or fourth unskippable speech that I couldn’t really follow. As a game, it could’ve probably just done without any story and let the gameplay speak for itself.

However, the gameplay doesn’t improve much over the writing. That’s not to say that it’s necessarily bad – it’s just… Fine. You have jumping, wall-jumping, dashes – basic building blocks of a platformer. Nothing is quite as refined as you’d want from a solid platformer, but it works. The action part of this action-platformer doesn’t improve the overall feel above average either. The hit detection is inconsistent, and dashing doesn’t help as much as you’re told it will. All of this is fine – except frequent dialogue interruptions slows your progress and prevents momentum and pace building. It feels like the way it flows has been an afterthought to the lacklustre story.

The game hints at a potentially interesting link between in-level deaths and your ability to choose certain speeches. The idea seems to be that if you die in level, this reduces your number of lives (or “brain condition”) – if this drops too low, you’ll be unable to pick some dialogue options, thus changing the story you experience. An interesting idea in theory, but it really relies on the story being good enough in the first place. Without that, it feels a bit more like a gimmick – and ten endings seems excessive.

Adding to the overall package are average graphics and uninspired sound design. The music is mostly short loops that get a bit repetitive, while the sprites seem to have been taken from some basic templates and re-designed in a very basic way. Some of these designs are better than others – the main character is alright, but the “hub world” sprites are a bit off. The doctor character is particularly odd – his animation makes his legs look like they start at knee-level.

I took a quick look at the credits and there is a hefty amount of Creative Commons stuff in there – which might go some way to explaining the overall feel that this game has been done on a shoestring. That’s not to say this is a problem – but it does feel that time hasn’t been invested in important areas to balance that out. I’ve come away thinking that neither time nor money has been invested in this game. However unfair that might be, the quality is just not there. The devs have also made an unfortunate choice of name for their studio – sharing their moniker with a different, NSFW company. Nothing to do with the game, of course – but an oversight that seems in keeping with the rest of this review.

Unfortunately, Synthetic Blood is not a game I can easily recommend. There’s some nice ideas here, drowning in mediocre design, gameplay and poor writing. For a game that markets itself on story and goes heavy on exposition, it’s a bad mix that I can’t see making an impact. Look elsewhere.

About SoupaBuoy
Rhys (SoupaBuoy) is a Cardiff-born creative and avid gamer. He is currently a Walkthrough Overseer at TrueAchievements, having previously been a member of their YouTube team too. He's recently branched out into streaming and loves platformers, puzzle games and RPGs.
View All Posts by Author
Visit Author Website
The Best Old School Game Apps
Humble Choice March: Pick’n’Mix Rundown