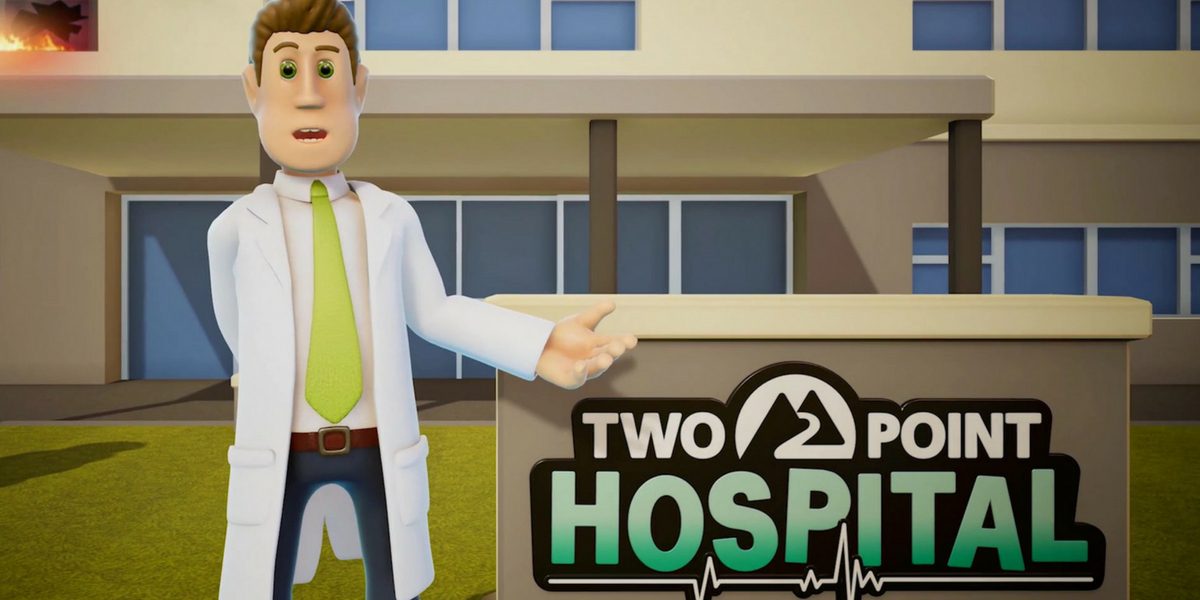 Theme Hospital rose to power in 1997 and has become an iconic classic, replayed countless times. Shortly after release, Co-founder Peter Molyneux left to establish Lionhead Productions, whilst in 1999 the remainder of Bullfrog Productions – owned by co-founder Les Edgar – was merged into EA Games and consumed and as the years rolled by, Theme Hospital 2 became a dream that we all knew was unlikely to ever happen. Theme Hospital was a unique tycoon – the perfect blend of slapstick humour and excellent gameplay. A tycoon which managed to hit all the right targets, appealing to both the tycoon magnate and the casual gamer. It seemed unlikely to me that the spiritual successor, Two Point Hospital, could possibly succeed to once again capture our imaginations over twenty years later.

Two Point Hospital is the first game from Two Point Studios and contains developers both from the original Bullfrog Studios as well as those from Lionhead Studios. Two Point Hospital released on Steam on 30th August and is available to buy on Steam and the Humble Store with a retail price of £24.99.

“Patients should leave the hospital before they catch something else.”

If you’re wondering what I’m rambling on about because you haven’t played Theme Hospital, Two Point Hospital is a humorous hospital tycoon. You build rooms, hire staff, diagnose diseases and cure them. Diseases include things such as Mock Star, where a pile of Elvis impersonators dance together in the corridor until a psychiatrist can get to them and Grey Anatomy, where patients are so despairing that they lose all colour. The solution? Simple! Chromatography. You need to create a balance between the rooms you have – and as you steadily progress through the levels the options become extensive – your staff and your bank balance.

Your hospital needs to look good and have a decorative rating, it needs to be the right temperature based on the regional surroundings (no heating needed, radiators or air conditioning), you have to fulfill patient and staff food, thirst and entertainment ratings. After all, you need to keep these guys sitting in the corridors waiting happily, so you need to look after their needs. Your staff will take breaks and if your staff are on a break when an emergency comes in – oh dear. One of the first emergencies in the game is a horde of Clowns. Clowns have to be cured in the duhumorfier and you get a clown poster as a reward for that level so that you can slap massive pictures of clowns all over your hospital. Fabulous. Just what I always wanted.

“Former patients are asked not to haunt the hospital.”

Machines need to be maintained and upgraded, vending machines need to be restocked, plants need to be watered at different frequencies depending on their type and dead patients need to be caught. Because they’re ghosts, roaming the hospital and upsetting just about everyone with their spookiness as well as lowing your hospital reputation which can have a knock on effect to future patients and staff options. It’s just the right mix of frivolity and seriousness.

Premium currency Kudosh can be earned through challenges, completing the hospital objectives and your career leaderboard, allowing you to unlock many new items that serve both decorative and gameplay enhancing purposes. For those who enjoy making things look pretty, there are a decent amount of items to choose from although I’m hoping for more being added in the future, as I’m a little obsessed with detail. These carry through with you and at each hospital with new unlocks there is a real sense of progression, ramping up the challenge slowly until you eventually have a hospital that’s impressively complex to manage – and completely insane! There’s also an online leaderboard, comparing you to your steam friends and giving you bragging rights if you care about that sort of thing.

“Please be aware not being aware costs lives.”

The players crying out for a seriously heavy management tycoon may be a little disappointment as on the whole, micromanagement is fairly low, but this doesn’t mean that Two Point Hospital is shallow, despite it having an easy learning curve and being accessible to all. There are no hard failure states and you don’t need to go too in depth with the management if you don’t want to. However, there are a decent array of options that can be tweaked and maps do get progressively more difficult with a three star system where each star has more and more win conditions. Management options include the ability to set prices for each treatment with consequences to your reputation if you get it wrong, the ability to see each individual patient and staff member statistics and change some things accordingly, a priority and queue system which you can change for rooms and more. Staff have inherent traits, as well as trainable perks, a salary and promotion system. You can get hands on and go a bit deeper than Theme Hospital allowed and it’s all done in an intuitive, accessible way.

A new and interesting feature are challenges. Challenges come in two forms, staff challenges, which are isolated to your game, and online challenges, which are map dependent but shared among your friends list. Competing against other players on the same map as you adds something different and lets you show off your hospital creation skills, but you don’t need to win the challenges to get the rewards, just taking part is enough, so it won’t cause any rifts when your bestie beats you.

The one downside for me – I hope in the future that the game adds a full sandbox mode for replayability and full creativity as at the current time, that’s the only thing I feel is really lacking. The campaign does offer a lot of content, but ultimately you’re going to complete the game and have little to go back to without a sandbox, even with the challenges and leaderboards. I just want to make the most massive and craziest hospital ever, without constraints or game dictated goals.

“Some patients should be ashamed of their condition. You know who you are.”

All too often, spiritual successor games are stagnant copies of a once successful world, never really bringing that world back to life despite updated graphics and systems. The unicorn of the gaming world is a spiritual successor which exceeds our expectations, because underneath all the positive descriptors is always a healthy dollop of nostalgia which is way harder to recapture than a rampaging ghost. Two Point Hospital nails it. It is everything that made Theme Hospital feel alive and made you smile, with modern graphics and tycoon gameplay plus quality of life improvements that will appeal to those of all experience levels. It’s absolutely not a copy – you can heavily feel the influence, but it feels fresh and is an absolute pleasure to play.

But what does the Welsh Gaming Network think of it? The game has been very popular so far with our members, with some lively discussions about the game and lots of  friends on my leaderboard to compare my stats with.

“Really enjoying it, more than I expected too. That’s coming from a FPS fan. I really love the illness names… verbal diarrhoea is my favourite so far.” – FreshPete

“My staff do naff all but moan and demand payrises, Glad there are no Union Bosses.” – Brynnie

“Millennial and whipper snappers, get ready for the greatest reinvention of one of the best games that us old people played before you was even a twitch in daddy’s nutsack.” – Airmessy

“It’s got great nostalgia for us theme hospital veterans but also enough modernization to stand up on it’s own today.” – Kal

About Athravan
Athravan - Christy - joined the WGN in February 2016. A keen writer and reviewer, she is currently the Editor of the Welsh Gaming Network. She lives in Cardiff with her husband and son, who was born in 2017. You can follow her Steam Curator "Play with Ath" by clicking the website link below.
View All Posts by Author
Visit Author Website
Volunteers Wanted For Rapture Gaming Festival 2018
Girls that Game @ Belong Cardiff 16/09/18