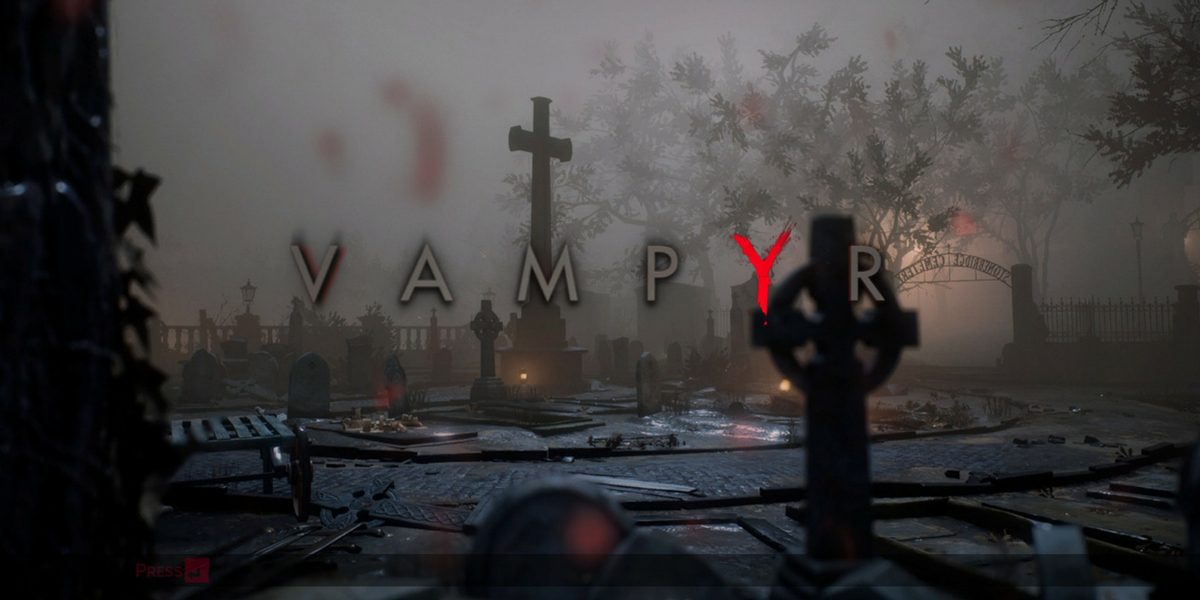 From the developers of Life is Strange, a band of French geniuses have developed a beautiful action role-playing game, centered around the main protagonist; a vampire. When I first heard about this game it was from word of mouth – a few whispers. I’ll admit, I wasn’t that interested. Until I saw the trailer, that is.

Following my obsession with The Order: 1886 and Assassin’s Creed Syndicate, I wanted more 19th/20th century industrial London in my veins and knew this game could provide it. What’s more, the idea that you play a vampire, with role-playing choice mechanics that influence how the story and world around you reacts, fascinated me. So, my superb girlfriend bought me a copy for my birthday and I couldn’t put it down. 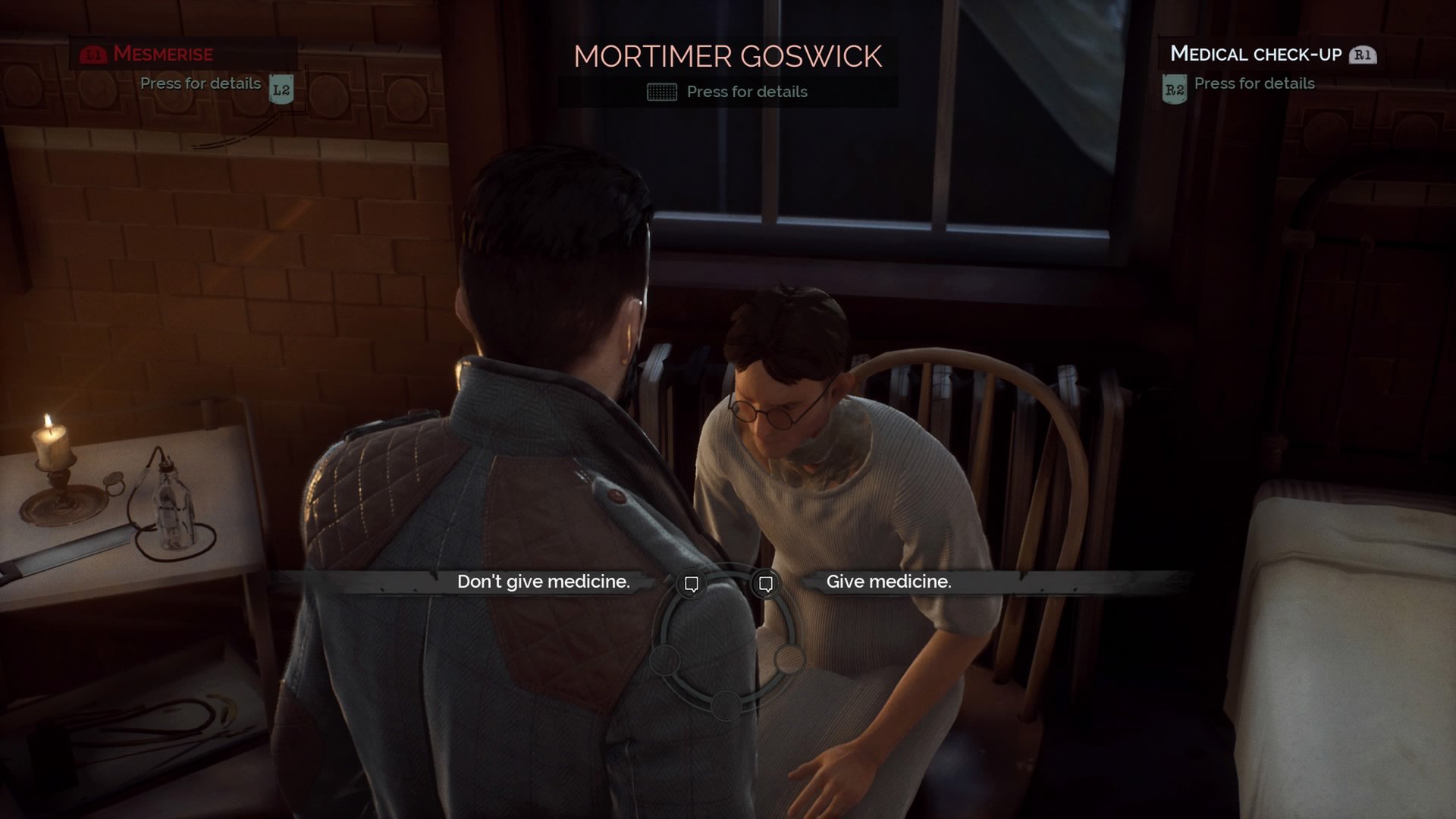 First, let’s kick off with how it all sounded. Set in 1916, in a foggy, almost deserted East London, I realised that ambient sounds, subtle music, voice acting and crisp action sound effects would be crucial for developing mood. It’s not all guns blazing and meant my attention as a gamer would fall onto the finer details that much more.

The sound and music is superb, if at times a little bit repetitive. From the ominous chorus of impending danger, to the screeching stringed instruments of vile acts, all the way to the melodic piano of more quiet moments, it handled mood and tone amazingly. However, when approaching big boss fights, I didn’t sense enough urgency and drama from the chorus being played, which was a bit of a let down. Additionally, entering buildings or entry-ways mean an abrupt end to outside sounds like rain (which can be jarring and interrupt the mood).

There were one or two minor details I really enjoyed. First, the meaty, solid thuds of weapons into enemies, followed by the wet, viscous rip and splat of their guts. And second, the patter of fine rain on corrugated sheeting atop smaller outhouses. It really picked up where the game fell down in bigger sequences. Sure, the dramatic end to chapter 3 didn’t thrill me as much as I’d wanted, but throughout the entire game the environment felt as appropriately alive as a deserted London could. 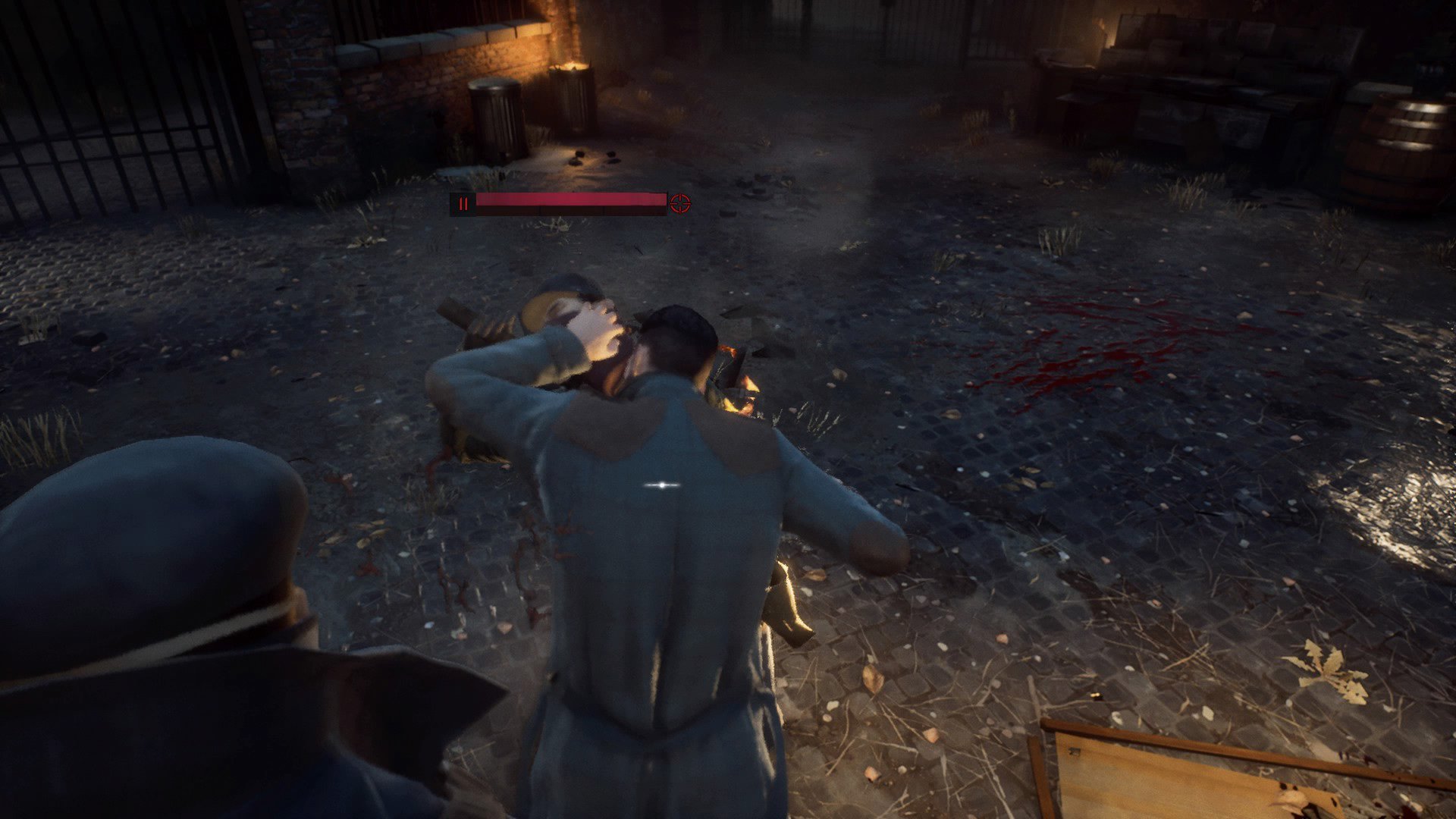 The graphics in Vampyr are fantastic. The buildings look detailed and the interiors are gorgeous. Clothing and weapons look superb and the weather effects make Vampyr the dark horror of an action RPG it’s meant to be. But with one fatal flaw – the horrific facial animations. Not quite Mass Affect: Andromeda level of poor (which, by the way, is a benchmark for just how low a triple A developer can sink to in terms of animations), but still quite terrible.

Often I found myself in the heat of conversation with a hospital patient who responded violently with a completely emotionless visage. It did make me laugh a bit and reminded me of the interrogation scenes in LA Noire. I say it’s a huge flaw because most of the game orbits the lives of well over 50 fully fleshed-out characters. With so much effort put into the rolling fog around mossy, wet bricked lanes, and the warm, dimly lit rooms behind frosted glass, it does make your head scratch: why such poor animations? And perhaps this is just an area many developers find challenging?

Besides the face stuff, this is a gorgeous looking game. A few out-of-bounds areas can be glimpsed when you go exploring, though all in all, London stands out gloriously from the dirty, wooden decks of the Southwark docks, to the glitz and glam of the East End theatre’s and boutique shops along tree-lined streets. It very much taking inspiration from games such as The Order and even Bloodborne. 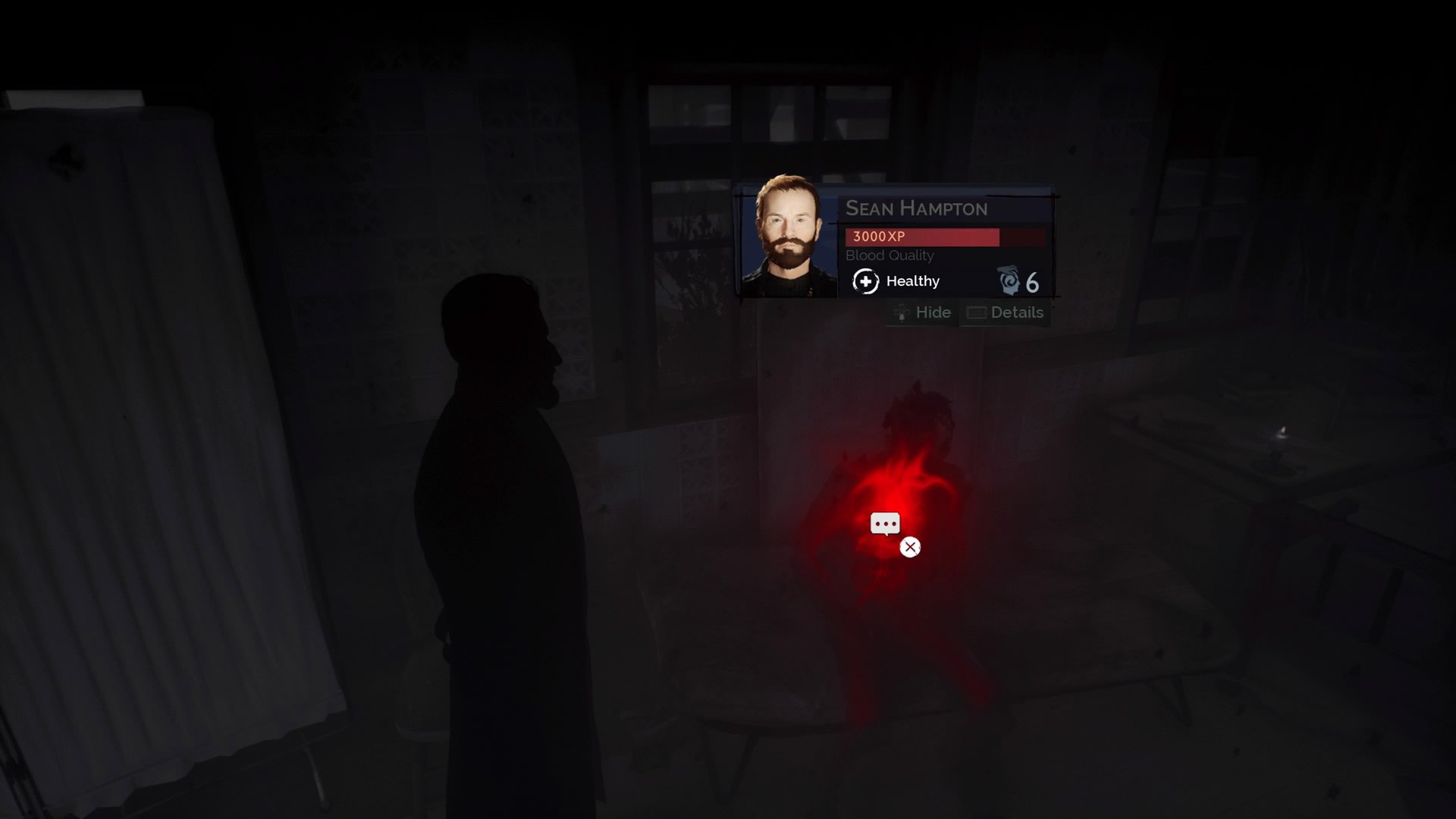 If you’ve mastered, or even sunk a few dozen hours into games such as Dark Souls or Bloodborne, then the combat of Vampyr will be quick to pick up and master. Lots of timing, parrying and dodging, followed by well-timed attacks. However, if you’re more of a button-masher, be ready to die. Lots.

As the genre hints at, this role-playing game relies heavily on interaction with characters, providing numerous pathways through dialogue options to progress. This comes in the form of standard questions and hint options. For instance, upon meeting a bar hand at the beginning of the game, I was able to select which things to quiz him on. Answering some questions correctly can reveal hints, whereby the main character you play, Jonathan Reid, can use his Vampiric abilities to coax new information from them. The dialogue is superb in this game and all characters feel real, solid and emotive. You really care about them.

Which brings me to the vampire gameplay of this game. Each NPC has a health meter you can see when switching into ‘vampire mode’, turning the world into black smoke, highlighting the blood vessels and beating heart of any living thing nearby. This health meter displays the XP you receive from killing them, what level you need to be to ‘mesmerise’ them into submission for the kill, as well as their ailments if any.

An example would be a nurse, who has a mesmerise level of 3 and currently has a headache. Once you progress further into the game, you can unlock level 3 and craft some medicine to heal her headache. Then comes the best bit. Now healthy, the XP from a kill will be substantially higher. But do you get the points, or let them live to keep the area in high health? Because everything in this game has consequences. If you walk around sucking everyone empty like a capri-sun down the Gower on a hot summer’s day, boosting all your vampire abilities to the max, the neighbourhood will descend into chaos. As a result, you’ll miss out on all the side missions and clues, and the game becomes a much tougher challenge.

Though alternatively, if you let everyone live, you’ll have to rely on your smarts to navigate the world carefully with low level vampire skills. It can be done, because XP is awarded by completing side missions and all discovering new hints from characters. Additionally, weapons around the word such as clubs and swords can be upgraded to combat the improved difficulty of tougher enemies. Ultimately, it becomes a balancing act and provides enormous re-playability. 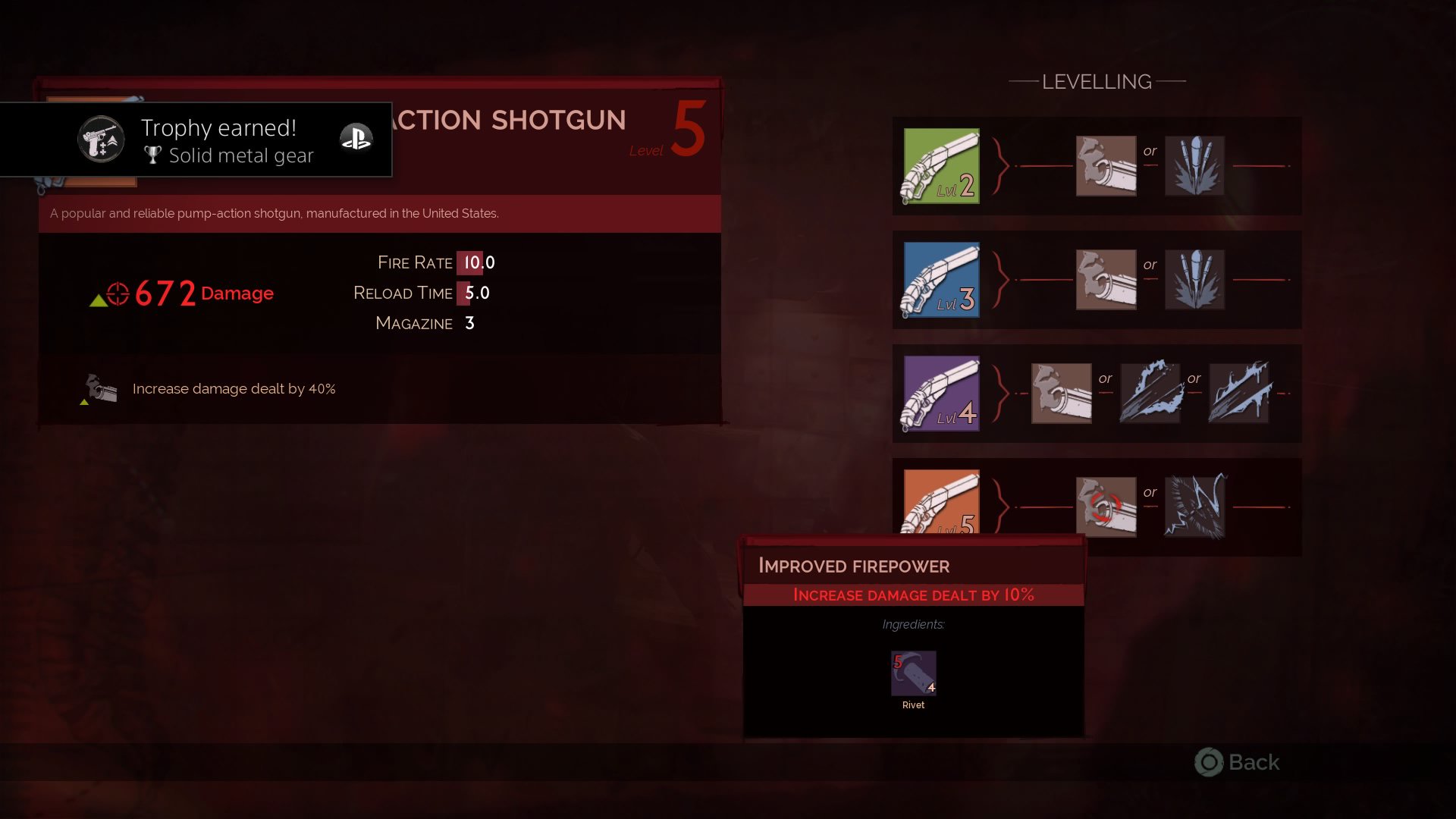 Set in London, 1918, Jonathan Reid, a renowned Surgeon born from wealth in a lovely part of the East End, has returned home from the war in France, only to be killed. Awakening amongst a pile of bodies in the Southwark docks, he slowly comes to, now a blood-thirsty vampire and immediately commits a heinous act which sets a tone for the rest of the game. An act he can never come back from. So you go forward, seeking refuge and answers. Learning about what a vampire is through research and character interactions, uncovering and solving mysteries, building alliances as well as enemies. Ultimately in the hopes of discovering who your maker is.

There are plenty of superb main characters in this, and plenty of plot twists too. The game consists of 7 chapters of all, which can be completed in about 20 hours if you rush through. But, if you take it easy, exploring the map, doing the side quests and listening to all the dialogue options, it can easily be doubled. 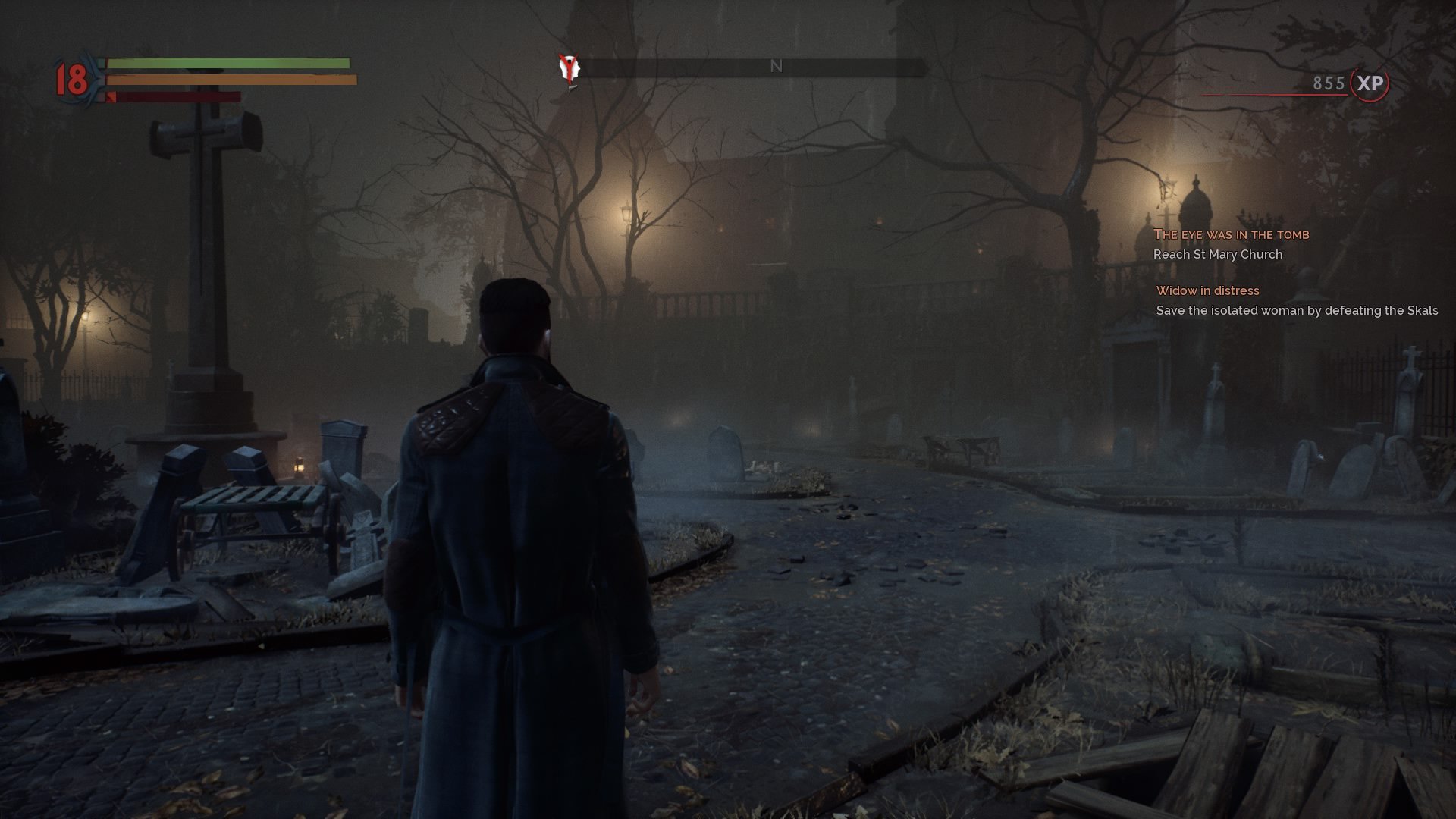 Overall, this game is well worth the purchase. Looking past a few audio problems, the challenge of combat and the poor facial animations, it’s a fantastic experience from start to finish. If you’re someone who likes dark themes, vampires, RPG’s and a good story, I highly recommend. However, if you’re a little on the fence about the short length of the story, the opportunity to replay the game is high, offering so much more.

Currently, I have no seen any solid information regarding DLC or a sequel, but I would be hard pushed not to sink more money into this potential franchise. A truly hot blooded, slash, bash, shooting, soot filled, Vampiric adventure of mystery, intrigue and morality.

About JasonGunslinger
A Cardiff dwelling, late twenties gamer living with his partner and two cats. In my spare time I love to go hiking, camping and regularly practice Ninjutsu. Favourite games include The Witcher 3 and Night in the Woods.
View All Posts by Author
Summer of Legends with BELONG
Welsh Gaming Network prepares for the Battle of Azeroth