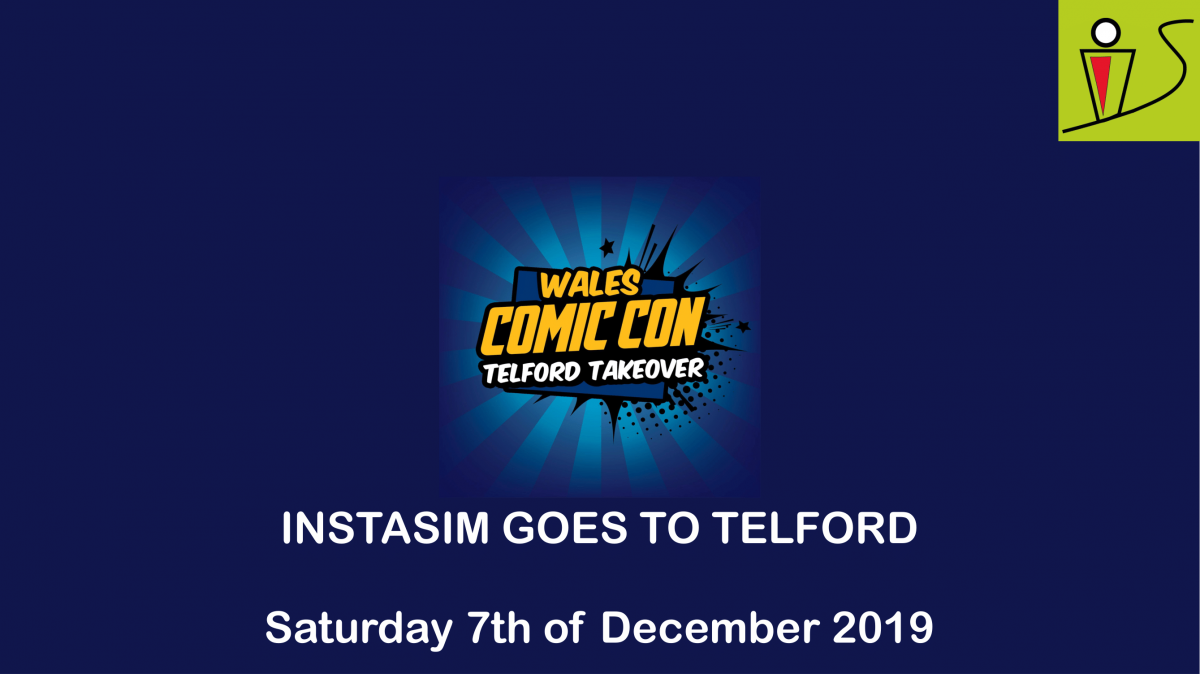 For the first time in Wales Comic Con history, the popular event crosses the border and made it’s way to Telford. Let’s see if the move really fared well to make the event bigger and better as was anticipated.

A huge thanks once again to Athravan for securing Press Passes for Wales Comic Con. This is now the 3rd time that I have taken my trusty vlogging camera with me to film at the event, and the experience was just a great as it has always been.

I also managed to get some help with filming this time as well. A great friend of mine, Charley Wiles, came along to help me create the vlog. The vlog itself isn’t released yet as I’ve been so busy with other things, but as soon as it is I will be posting it on Social Media. Make sure to keep an eye on the InstaSim Twitter Page to know when it releases

Due to other work commitments, we were only able to attend Wales Comic Con on the Saturday. Due to this, we didn’t manage to record as much footage as we would have liked meaning the final video itself will be slightly different to how they are normally.

I can’t talk about Wales Comic Con without mentioning the big change to the event this time around. Of course, the big change was the move from Wrexham, across the border to Telford. The event, this time, was housed in the Telford International Centre, which allowed the event to be hosted indoors, which, following the adverse weather of the April event, was a very good idea. The main controversy of this move, of course, was the event had moved out of Wales.

Despite the controversy around the move, overall I think it proved successful. The event itself was very busy as always, and it seemed most people had a very good time. However, with this being the first time in a different venue, there were some teething problems. That’s not to say the event itself was bad, as it wasn’t. Overall, I think it was very good and there were definitely some good things about the move to Telford, but I, personally, didn’t feel it lived up fully to the hype.

As with the April event this year, the guest lineup was once again pretty good. There were some very big names in the lineup this year, including David Tennant making a come back after proving very popular in April. Matt Smith, David Tennant’s successor as Doctor Who, also made the lineup at Wales Comic Con this year, as well as Catherine Tate, the very popular sidekick during the Tennant years.

From Harry Potter, Stanislav Yanevski and Tolga Safer made a comeback to Wales Comic Con once again, but the big Harry Potter star in attendance this time was Matthew Lewis, who played Neville Longbottom in the film series.

As per usual, many of the guests were also lined up for Q&A session, one of which me and Charley attended on Saturday (namely the Guardians of the Galaxy Q&A Session). In fact, this was quite an interesting session to go to as it started off as a normal Q&A session, then Michael Rooker joined in half way through and the whole session changed completely.

The main issue I had with the guest lineup was there wasn’t many from franchises I personally enjoy. This isn’t an issue with Wales Comic Con, this is just down to personal preference, though I’m looking forward to see the lineup for the April event as I’ve heard that Voice Actors may be a big part of the lineup next time which is hugely exciting for me.

Once again, the gaming area was at Wales Comic Con with much of the usual stuff going on. Ubisoft were there once again showing off some games, and the stage was taken over with Nintendo competitions going on. Special Effect were back once again too to show off some of their tech and the ROG Bus also came back to Wales Comic Con which was amazing.

One large difference this time, however, was the gaming students at Glyndŵr University weren’t at Wales Comic Con this time to show off their games. This was quite unfortunate as Wales Comic Con often sees itself as a great opportunity for the games students to showcase their work to the general public. On a personal point as well, it would often provide me with some content when they are there as I often ask them how their games are going and what their plans are for the future.

One thing I noticed as well this time about the gaming area was it seemed much smaller than it was normally at Wales Comic Con. Where it would normally be based in it’s own building and would be able to utilise much of the space by itself, this time it felt like it was given a very small amount of space which didn’t make it all that welcoming.

Cosplaying, once again, made a huge part of Wales Comic Con. Storm Troopers were, once again, roaming around the venue. Many people were also dressed up as different characters from Doctor Who, owing to the large lineup of Doctor Who stars. In particular, David Tennant was very popular amongst the Doctor Who cosplayers.

As I’ve mentioned already, Wales Comic Con in Telford wasn’t a bad event. It certainly was an improvement with it being all indoors, and there did seem to be a lot more space to include more vendors and guests at the event than would normally be the case. However, there were still some issues.

Firstly, however, I’d like to point out these issues are Saturday specific as I didn’t attend the Sunday of the event this year.

The first main issue I noticed at Wales Comic Con was the lack of signposting to different areas. This made it quite difficult for us to find the Q&A Hall originally as there wasn’t any information around the venue to find it, other than the scrolling screens which would state it was upstairs. As there was also no map available on hand, it wasn’t particularly easy to find where everything was, especially as Wales Comic Con usually provides a map to the visitors to find where they need to go.

There were also far less options available for food at the venue this time around than normal. The only main food area available was upstairs near the Q&A Hall, and there was maybe a couple of other options near the main hall where it was possible to get food from but the options weren’t great. Within the main hall there wasn’t anything at all, and no areas to sit down properly which wasn’t great either.

On Saturday, there was also a very large amount of visitors, which made the event very successful, but also meant it wasn’t easy to navigate the main hall with all the queues to high profile celebrities. This certainly proved an issue with people with reduced mobility as they found it very difficult to move about. Vendors near to the popular guests were also blocked due to the longer queues which wasn’t great. This issue, in particular, had nothing to do with Wales Comic Con themselves, and I have heard that it was mostly dealt with by Sunday, although it was definitely prevalent on Saturday.

As mentioned before, I do think the move to Telford proved to be a success, and I wasn’t expecting a completely flawless event given the big change. The issues I mentioned above were purely based on what I had seen during the event and are in no way meant to criticise how Wales Comic Con was run.