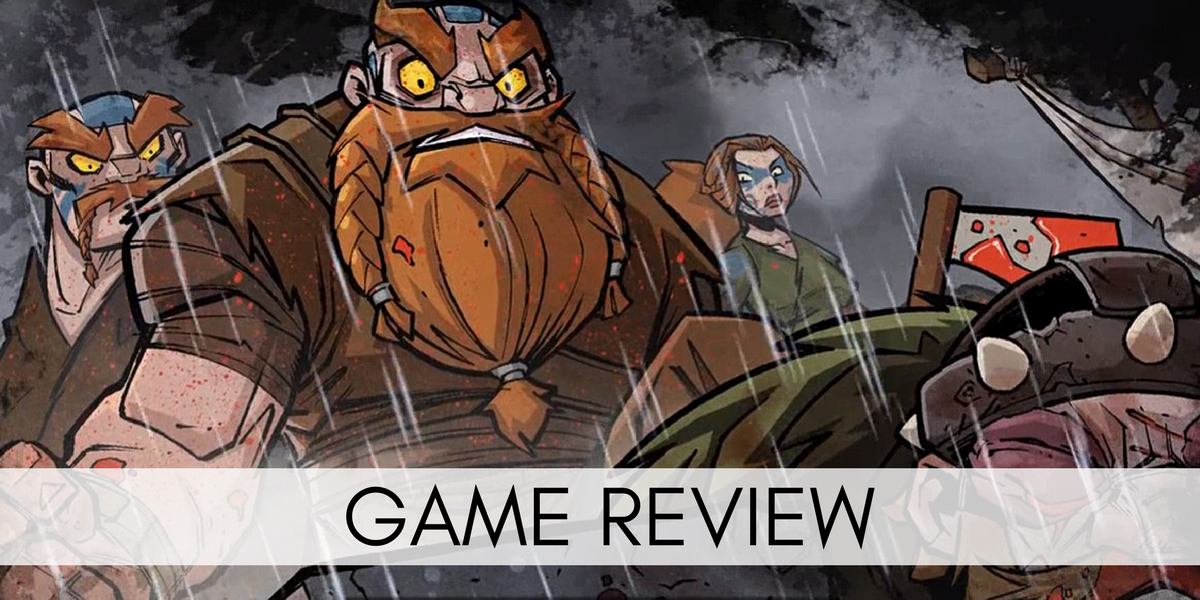 Wulverblade is a side scrolling brawler available on PS4, Xbox, Nintendo Switch & Steam. Fully Illustrated kindly provided a review key for the purpose of this review.

Limbs fly and blood pools across the floor as I hack my way around 120AD Roman occupied Britain. I smash an archers head into the floor repeatedly until he is decapitated and then turn, lobbing it as a missile into an oncoming centurion, knocking him to the ground. I’m playing Brennus, a slow powerhouse who can mow down the hordes with ferocious brutality. Caradoc is the more balanced option, offering speed, power and defense, or Guinevere who is fairly weak but speedy, allowing her to stack up c-c-c-combos and chains galore. These three characters are available to play through the campaign mode which focuses on the progressive story, or in arena, where you fight endless hordes and challenges for high scores. 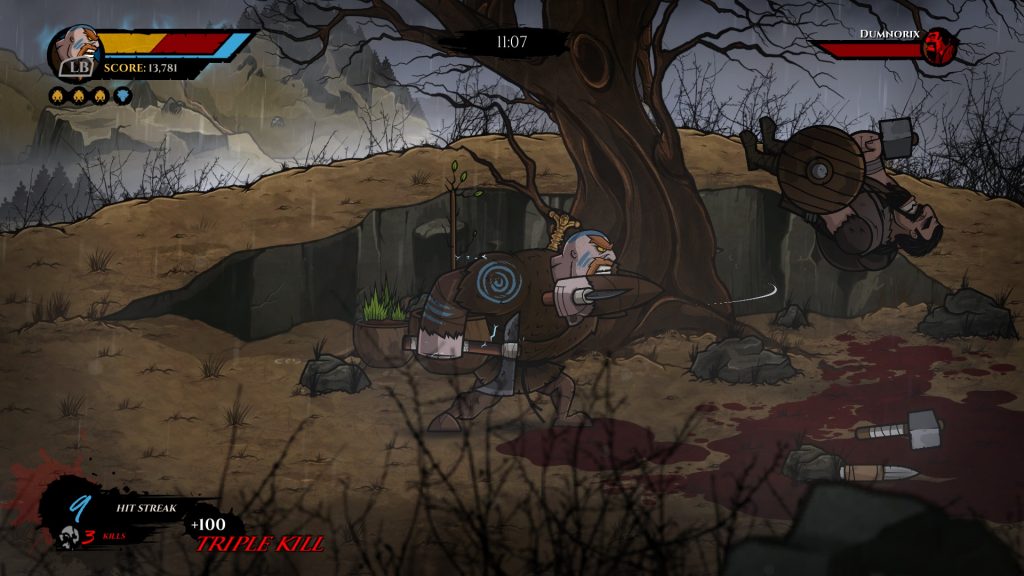 Wulverblade is a side scrolling brawler where non stop button mashing action blends with historical interest, set to the backdrop of a colourful, cartoonish style. The graphics appeal to me aesthetically with detail and layered environments. I loved the animated backgrounds which added immersion, such as a flight of deer running behind you in the forest, crows watching you from the foreground or a distant battle taking place. The animations are smooth and fast with satisfying combos, a rage bar for ultimate annihilation and the ability to call upon your wolves once per level to savage the enemy. I recommend you save it for when you’re being overwhelmed, as this game really does love to throw numbers against you.

The amount of historical depth was impressive – with lots of information, cut scenes and collectibles. Even the odd secret or two to discover. 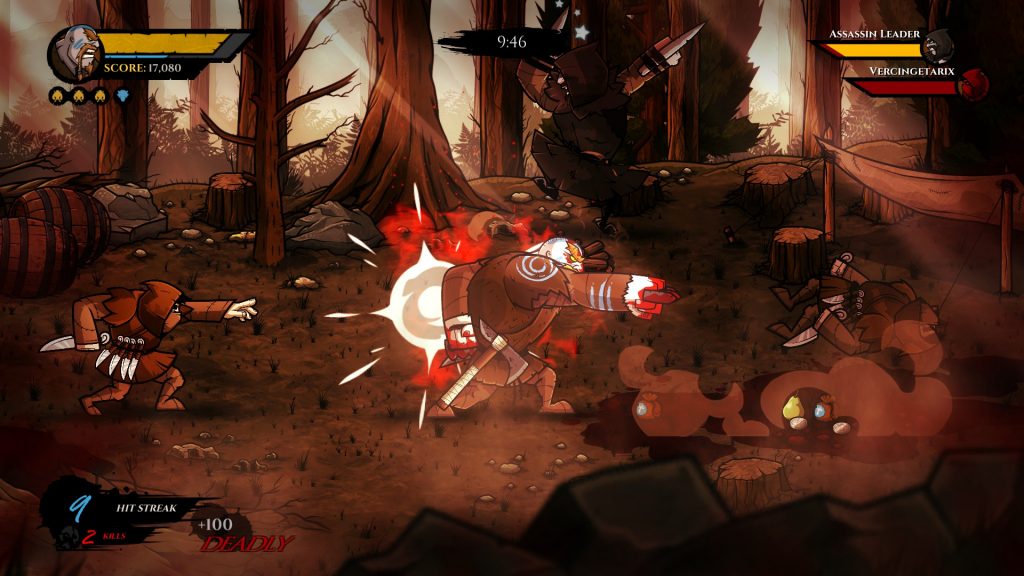 The gameplay is a little generic and I felt it was somewhat lacking although some might find it simply nostalgic. We have two main moves, light and heavy attack, with an array of weapons, both melee and missile which you pick up from fallen enemies as well as an essential block. There are breakables, food items and collectibles, but the only progression is in the story and how long you can survive. There are no increasing stats, no where to spend your mad loot (it simply accumulates your high score) and after the first few hours my fingers were numb and it was time to take a break. I didn’t really feel I was playing with any skill or learning much as the game went on, purely charging at enemies and hitting X until I was surrounded by blood and limbs.

There is a boss fight to every level, but they’re heavily telegraphed and not too challenging. The biggest challenge came from hordes of stun-locking enemies who kept knocking me down, which was a little bit more frustrating than I’d like. Bear in mind though, I’m not exactly good at video games so this probably could have been avoided. On the whole, I found the normal enemies more challenging than the bosses, just because of being overwhelmed by numbers. 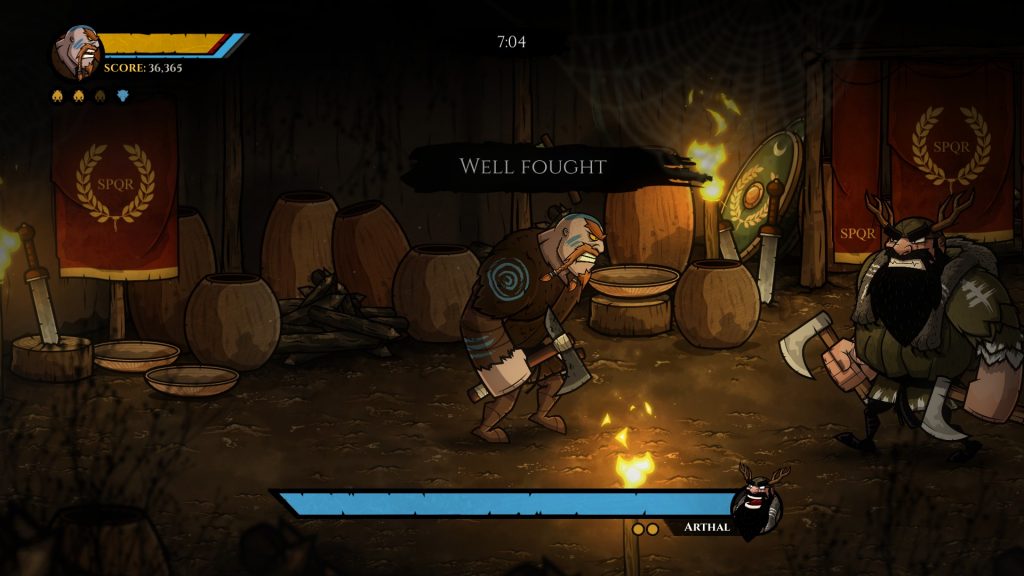 The game is not well optimized for keyboard and mouse, to the point where I personally found it unplayable. The keys cannot be rebound, and I’ve never seen a game that makes you hit k, l and ; for your moves. It just didn’t work well for me at all. I switched to controller about 10 minutes into the game, which is intuitive and responsive, but I simply don’t consider keyboard and mouse a viable option.

It’s a shame that the gameplay didn’t have more depth and customization as I prefer my action to have a little bit of RPG added into it, but some will enjoy the simplicity of the arcade-action and what’s there is done very well, as long as you’re willing to pick up a controller. 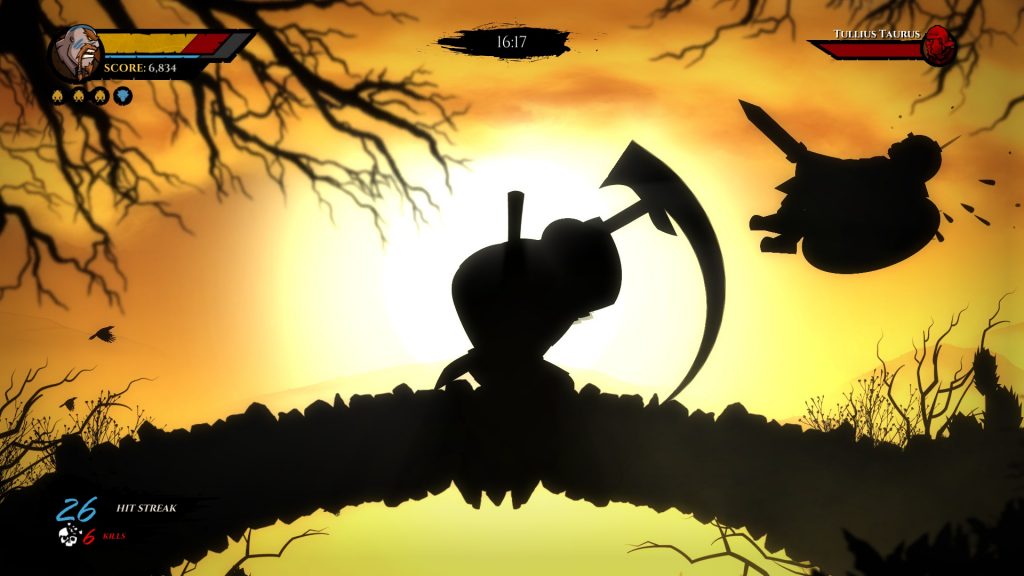 The art and history behind this game kept me playing far longer than the gameplay did, but it’s worth mentioning that it supports full online co-op and this is definitely a game I’d enjoy playing with a friend. At around 5-6 hours for a playthrough and then high score modes available, you’ll have to judge whether it’s worth the entry price of £11.39. I’d recommend it if you really enjoy the arcade action of a side scrolling brawler coupled with an interesting setting and if you like the aesthetic.

Wulverblade certainly has style, but I’m not completely sold on the substance.

About Athravan
Athravan - Christy - joined the WGN in February 2016. A keen writer and reviewer, she is currently the Editor of the Welsh Gaming Network. She lives in Cardiff with her husband and son, who was born in 2017. You can follow her Steam Curator "Play with Ath" by clicking the website link below.
View All Posts by Author
Visit Author Website
Transfuzer 2018
The Hidden Levels presents The Void Rains Upon Her Heart
COMMENTS 37